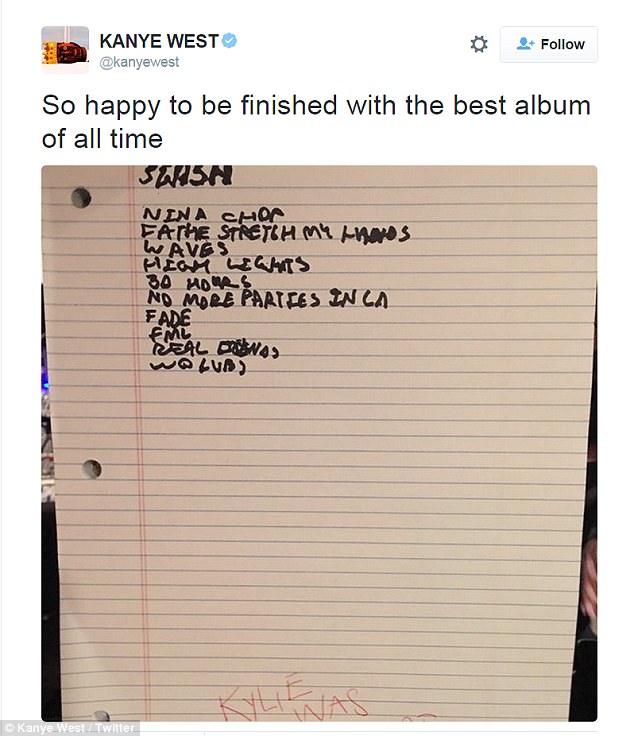 The rapper took to Twitter to share his relief at completing his long-awaited follow-up to Yeezus on Sunday.

‘So happy to be finished with the best album of all time,’ he wrote, sharing a photograph of the track listing.

Kanye West tweeted on Sunday that his new album Swish is finally done, and promised fans it was ‘the best album of all time’

And it appears his sister-in-law Kylie Jenner also got her hands on the list of ten songs, with the words ‘Kylie was here’ scrawled in red ink on the bottom of the page.

In addition to being hard at work in the studio, Kanye and wife Kim Kardashian welcomed their second child, son Saint West, on December 5. They are also parents of daughter North West.

Kim and Kanye have been taking to social media over the past few weeks to share new songs from Swish with fans.

They posted links to his new songs No More Parties in LA, featuring rapper Kendrick Lamar, and Real Friends. Both tracks appeared on the list Kanye tweeted on Sunday.

The critically-acclaimed rapper, who was named The Most Stylish Man of The Year for 2015 by GQ, has also been working on his next fashion collection, Yeezy Season 3, while continuing to record and finalize tracks in the studio.

Kanye also teased fans by posting a photo of a classic 1980s drum machine, the SP1200.

‘Had to do it,’ he captioned the photo on Thursday.

The I Am A God rapper has previously described the album as a ‘sonic painting,’ and promised fans it would be more upbeat after the abrasive Yeezus, which came out in 2013.

‘I don’t wanna overly describe it or overly try to hype it up. I’ve been working slow,’ the 38-year-old told radio host Big Boi when he called in to Real 92.3 in November. 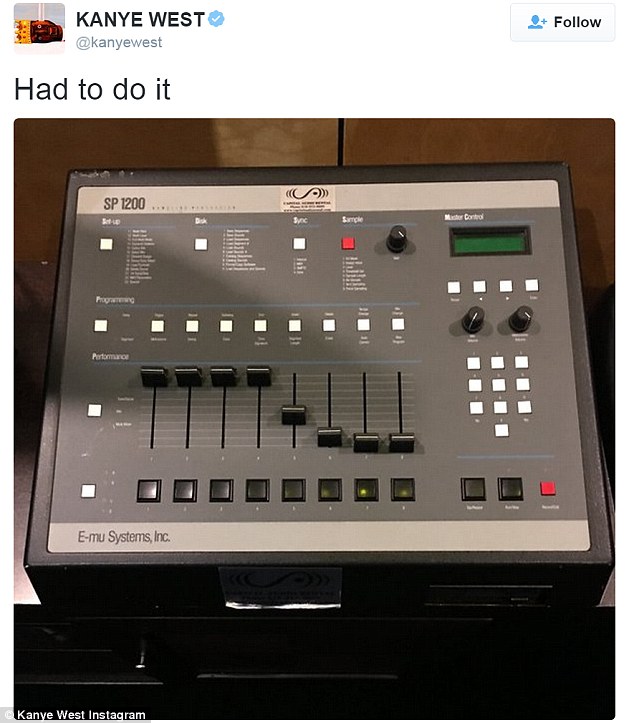 The All Day rapper posted a photo of an old drum machine to Twitter last week, writing ‘had to do it’

But he said the album was ‘sounding good’ and added: ‘It’s like a sonic painting, and it gets better and better every week.’

Kanye’s reps also recently shot down reports he was planning a tribute album of David Bowie covers. The rumors sparked an online petition of angry fans demanding the rapper drop the project.

And singer Rihanna revealed this weekend that Kanye would not be producing her upcoming album, saying they were both busy ‘with our own projects.’

Meanwhile, Kourtney Kardashian shared a few selfies with sisters Kim and Kylie on Instagram as they attended a Swish listening party in the studio on Saturday.

‘The Life of Pablo’: Kanye West reveals ‘final track list’ for new album and meaning behind the title T.L.O.P. but leaves off song that inspired it