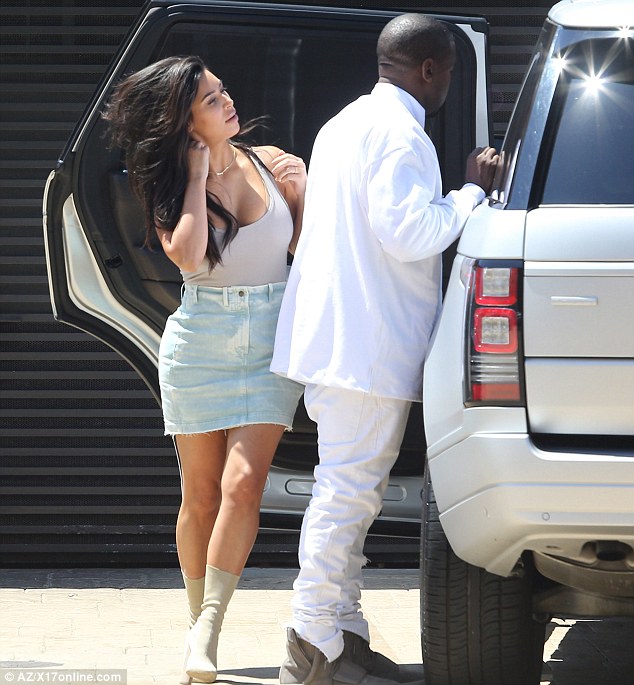 There’s no denying that Kim Kardashian likes to be the centre of attention.

And true to form, the reality star made sure all eyes were on her as she celebrated Father’s Day with her family on Sunday.

Flicking her glossy hair, and adjusting her cleavage, the mother-of-two played up to the watching cameras, as she strutted past them at Nobu in Malibu.

Kim showed off her hard-earned figure in a skintight tank and mini skirt as she carried a sleepy North into brunch at Nobu.

Family outing! The Kardashian-Wests put their best foot forward on Sunday as they were spotted in Malibu hitting Nobu for brunch to celebrate Kanye West for Father’s Day 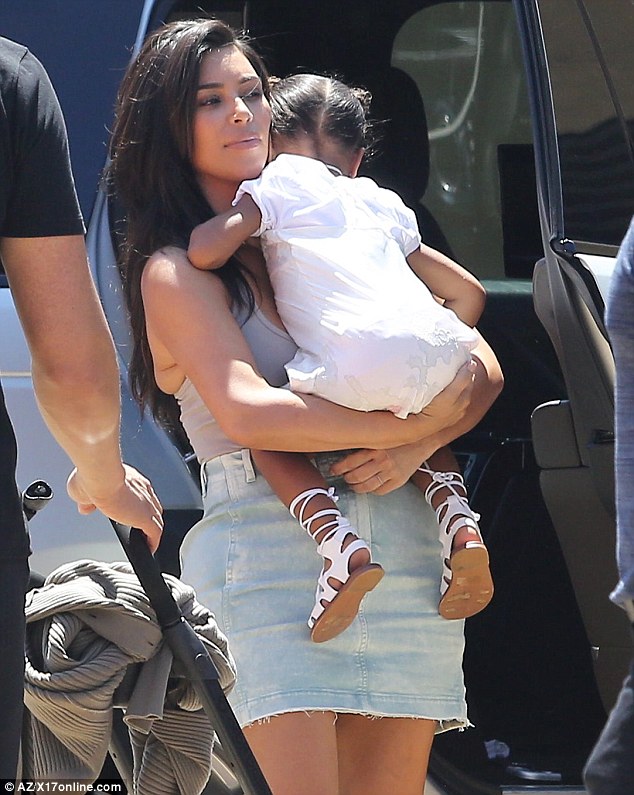 Mom’s the word! The 35-year-old carried her sleepy daughter North

The 35-year-old was joined by the man of the hour, Kanye, as the family celebrated Father’s Day at the popular restaurant in Malibu, California on Sunday.

Kim wore a form-fitting, tan tank top, which featured a low-plunging front that put the star’s ample assets on display.

She wore the skintight top – which also showcased her taut stomach – tucked into a light wash, denim mini skirt.

Her fitted mini showed off her toned pins, and she coupled those with a pair of tan, suede, heeled boots. 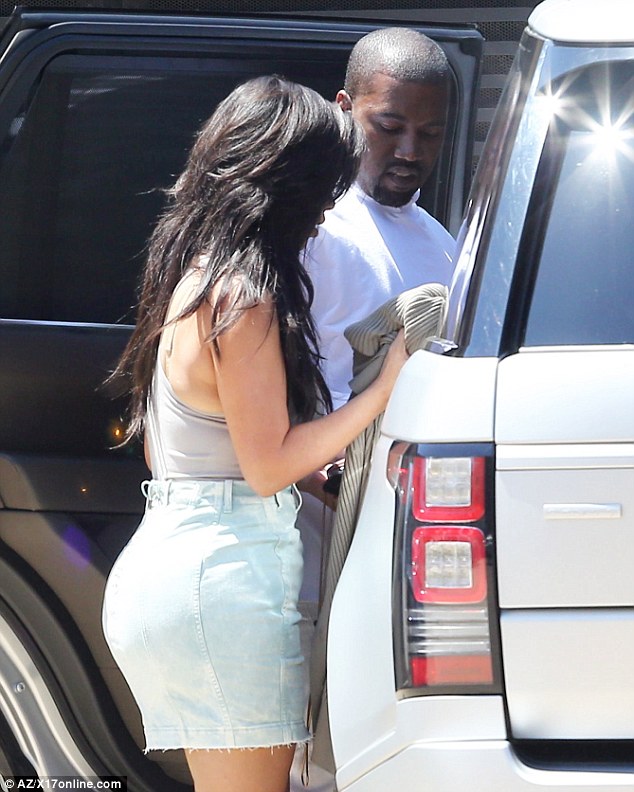 Teamwork! Kim and Kanye worked together as they got their children out of the car before heading into the Malibu restaurant

Voluminous: The raven-haired beauty flaunted her enviable tresses – which were worn in a center part and styled in soft waves – as she hopped out of the car

Kim accessorized with a small, gold necklace, as her long, brunette tresses were worn in a side part and styled in soft waves.

She kept her make-up natural for the family outing, sporting a nude lipstick as she was seen getting out of their Range Rover and preparing to bring young daughter North inside the restaurant.

Kanye looked sharp for his special day in a loose-fitting, white button down, worn with a pair of fitted, white jeans. 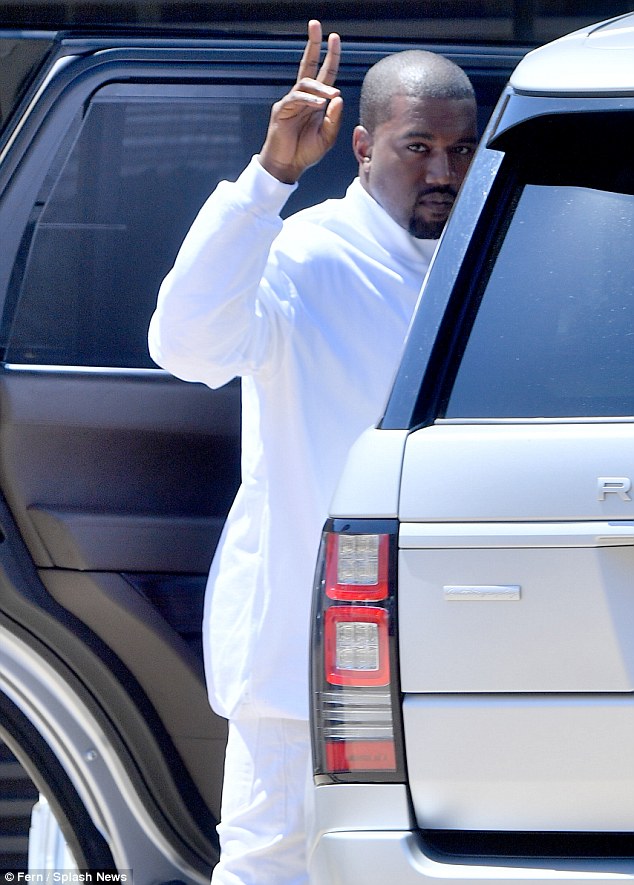 Happy to be here: Kanye looked to be in good spirits for his Father’s Day brunch, flashing a peace sign to fans

He coupled the look with a pair of grey, Yeezy Boost sneakers, as he helped Kim tend to the children.

The Life of Pablo star looked to be in good spirits for the outing, and flashed a peace sign to fans at one point.

The couple were seen pulling a stroller out of their white SUV, and assembling the piece so it could hold a baby carrier. 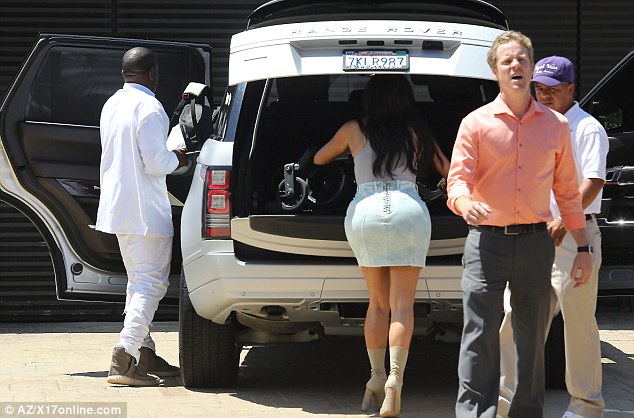 It takes two! Kim was seen pulling a stroller out from the trunk of the SUV, as Kanye held a baby carrier

Kim also grabbed a stylish, tan sweater, before picking up three-year-old daughter North to head inside.

The doting mother-of-two was seen carrying her sleepy, little girl, who had just turned three earlier this week.

The little girl’s big day was marked with a mermaid-themed party, which was shared with her cousin Penelope (Kourtney Kardashian’s daughter), who turns four on July 8. 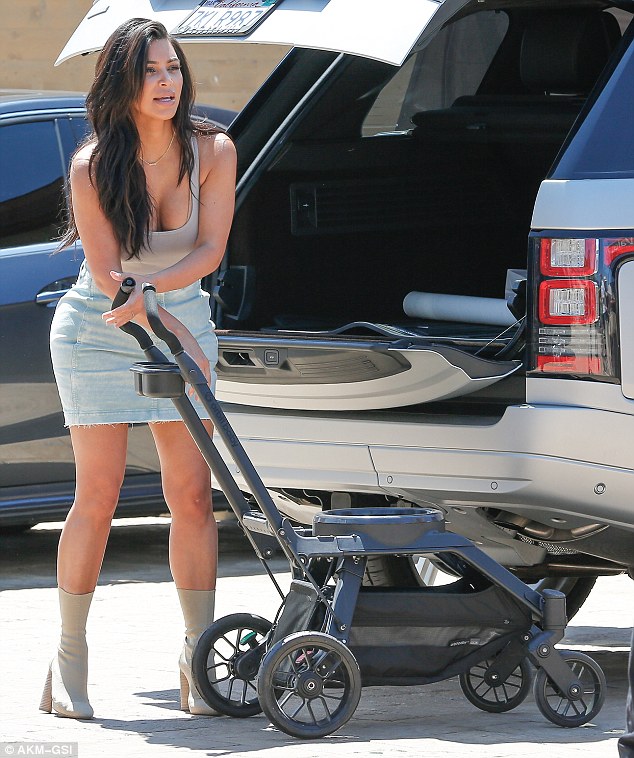 She’s got her hands full! The Keeping Up with the Kardashians star didn’t miss a beat as she set up the stroller in her skintight mini skirt and heeled boots

If a man’s virginity can’t be tested on wedding night, mine shouldn’t be tested – Uche Jombo on gender equality