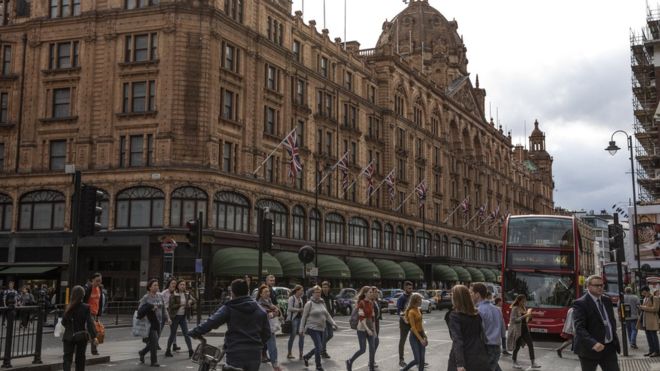 A woman who spent £16m at Harrods and became the subject of the UK’s first Unexplained Wealth Order has been arrested and faces extradition.

Zamira Hajiyeva, 55, is the wife of an ex-state banker who is serving a 15-year prison sentence for embezzlement in their home country of Azerbaijan.

Mrs Hajiyeva, who lives in a £15m house near the London store, became the first person to be served a UWO by the National Crime Agency last month.

Her lawyers say she is no “fraudster”.

The UWO means she has to explain the origin of her fortune.

It was revealed at Westminster Magistrates Court in London that Mrs Hajiyeva was arrested last week by officers from the Metropolitan Police acting on an extradition request from the authorities in the Azerbaijan capital, Baku.

She faces two charges of embezzlement and has been held in custody since giving herself up voluntarily last Tuesday.

At a bail hearing, prosecutors argued that she should not be released, claiming she posed a flight risk.

Her legal team argued that though she was clearly a “spendthrift”, she was not “a fraudster” or likely to flee the country.

Hugo Keith QC added that her children were based in the UK, where she has also lived for almost a decade having left Azerbaijan after surviving a violent kidnapping.

Senior district judge Emma Arbuthnot agreed that Mrs Hajiyeva could be released on bail – if she pays £500,000 as a guarantee, stays at her home in Knightsbridge, does not travel outside the M25 and reports to police every day.

But prosecutors immediately appealed, meaning she will remain in custody.

The appeal hearing is expected to take place on Thursday at the High Court.

Mrs Hajiyeva also remains under investigation by the NCA.

Last week, the agency seized jewellery belonging to her family that was worth more than £400,000 and was due to be auctioned at Christie’s auction house.

Emefiele: Nigeria gets over 30% of remittances to Africa