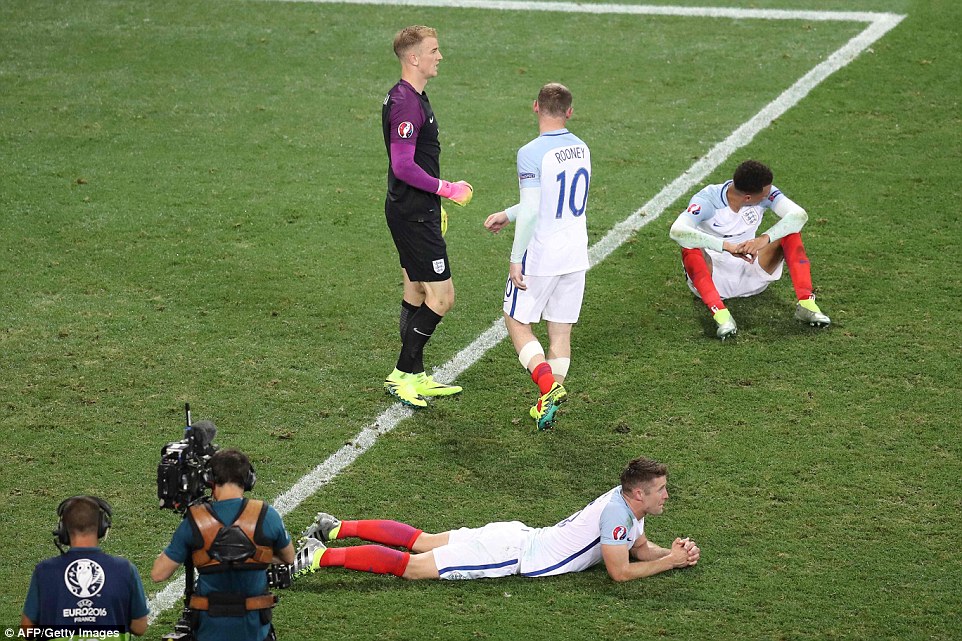 A lot of people in England have been trying to turn the clock back over the last few days – and Roy Hodgson managed to get it all the way to Belo Horizonte in 1950.

Not since a distant World Cup, 66 years ago, have England suffered a humiliation as great as this. Not since this country dipped a first tentative toe into the world of international competition, has a result sent such seismic waves through the national game. Beaten by Iceland – a nation with a population the size of Leicester.

For Hodgson, this was a very bitter end and he was gone for good within 20 minutes of the final whistle. His players were booed, individually and collectively, and there was none of the residue of goodwill felt at the end of the 2014 World Cup.

You’re not fit to wear the shirt,’ supporters chanted at players, some lying face down on the pitch, Gary Cahill in tears.

When goalkeeper Joe Hart turned to acknowledge their frustration, he was met by a series of hand gestures that may have been imitations of his attempt to save Iceland’s second goal, but probably weren’t.

What a waste the last two years have been. Hodgson should have gone in 2014, when England lasted two matches at the World Cup. He wasn’t the man then, he isn’t the man now. Just like Stuart Lancaster, England’s Rugby World Cup coach, there has been much talk of progress, promise and a strong culture of responsibility, but under pressure, that all evaporated.

Late in the second half, Hodgson introduced Marcus Rashford. He immediately charged at Iceland’s defence with a youthful abandon that may have been more useful if utilised earlier — he seemed to be warming up for 10 minutes. Rashford won a corner and began running towards the mark to take it.

At that moment, a senior player — Wayne Rooney was off by then — should have chased after him, told him to get in the box, and taken responsibility for delivering the ball that could have thrown England a lifeline. None did. So Rashford took it and, because he is not a corner taker, miskicked it to the first man in a blue shirt.

There were so many moments like that, moments when England’s weaknesses, mental and technical, were exposed. The defence was poor, as suspected, unable to hold a lead for two minutes against a team supposedly set up only to resist an English onslaught.

Yet, equally, this was a squad that was meant to be packed with match-winners, but could not equalise against Iceland given 72 minutes. Jack Wilshere came on and looked as off the pace as he has done throughout this tournament. Another gamble failed. There have been too many of them here.

Rooney into midfield for the first time in game one, six changes in game three. There was frustration when the draw against Slovakia put England in the more difficult half of the draw, but even that did not matter in the end. England did not get a swing at playing one of the tournament favourites; they were knocked out by the tournament’s fairy-tale team instead.

Hodgson had his chances. England turned a friendly around against Germany, but never tried that selection, or that system again. England got the fillip of a last-minute win over Wales, and then sacrificed that momentum in the next game.

Ultimately, Hodgson had no choice but to resign. The signs of progress that the FA demanded were sadly absent in a display as confused and ineffectual as any England have delivered at a major tournament to date. Beaten by the United States in 1950, there was at least mitigation. It was their first tournament, and in South America. These were unfamiliar circumstances.