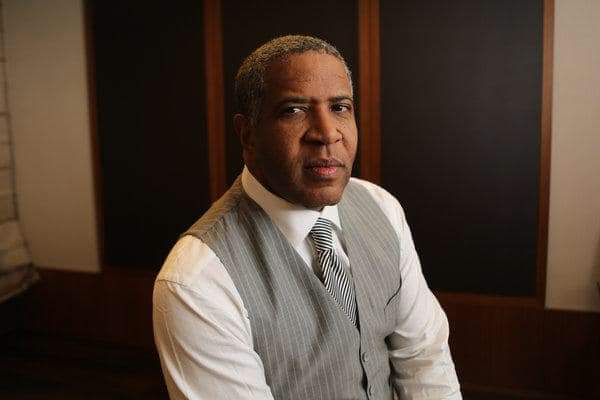 Robert F Smith is a black American Investment banker. He is also the richest Blackman with an estimated worth of $5Billion . Until past weekend, most planet earth dwellers never heard of this rich philanthropist
and successful man.

Last Saturday he was the Commencement Speaker at Morehouse College in Atlanta. Morehead is historically all black male University in Atlanta Georgia. One of its famous alumni is the late great preacher and civil rights icon, Martin Luther King Jr.
By the end of his commencement speech, Mr. Smith took a detour from his prepared speech and stunned the graduating class of 2019, guests, school staff and parents. He announced that he would pay off all the students’ loans for the Entire class of 2019. It is estimated that more than 400 students shall benefit from his magnanimity which pay off bill is about $40Million dollars.

If you schooled in an American University or college, you would understand and appreciate this gift to a new college grad’s early life. $40Million nor be choncholo money. I just wondered when our billionaires will give back to impact lives as Mr. Smith exemplified with his excitement.

Tony Elumelu And Aliko Dangote are two known billionaires in our dear Nigeria. Tony was my classmate at Saint Pius Grammar School ( Oraeze Grammar School), Onicha Ugbo: that great institution, despite its history as our stepping stones to whatever we are today, represents neglect and abandonment.

That institution produced TONY Elumelu and I would hope he is motivated by Mr. Smith’s graciousness to rescue our dear citadel of rural education. Tony remains the most financially successful “old boy” from our secondary school.

Same wish for Dangote Aliko and all billionaires. Go back to the pathways to your success stories today and lift that institution up from abandonment and negligence. Dino Melaye could sell off a few of his Ferrari’s and Lamborghinis and use the money to establish scholarships in his hometown schools, in memory of his late mother that died recently.

Africa, may God continue to expose us.

Prof and His Co-passenger!

Would You Hire A Driver Who Wants To Drive You By Force? – Funke Egbemode, newly reelected Editors’ Guild President