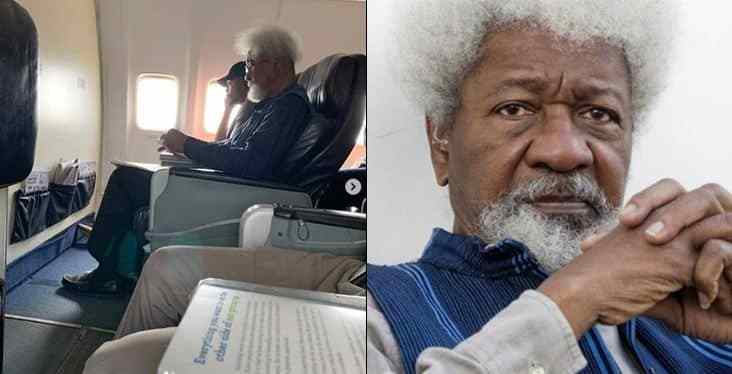 You must have read the ongoing debate about Professor Wole Soyinka and some young passenger onboard a flight, where the supposed young man declined to yield his seat to the Prof and insisted he (Prof) left despite appeal from some cabin crew and Mr. Tonye Cole, a businessman and politician, who originally shared the story.

First, I wasn’t going to talk about it, but when I started reading some of the comments trailing the post, practically in all the platforms it was shared, I knew there was a problem and it is one of critical thinking.
It was either that some of the comments were informed by sheer ignorance, seeming dislike for the Prof or an outright manifestation of a decline in our entire value system.

For starters, the one thing that distinguishes the Black Race from others is their culture, which emphasizes respect without caveats. Indeed, the western world too has begun to see the positive side to this wonderful choice of the Black people and is beginning to borrow as much as it could from it, albeit subtly.

The idea that you can’t scold your child when he or she does something wrong is gradually giving way, because they can tell it is largely responsible for many of the vices that are operative now in their lives. Even if they cannot come out openly to controvert their own laws, they know some of them are not progressive, either in form or content.

For those, who reckoned that the young man was right, because it was his seat and he paid for it, they are correct. This, therefore, suggests to me that, as a people, we might have entered a phase in our collective life, where the struggle between our sense of what is right or wrong and what is decent as a result of our value system in the estimation of right-thinking people, is real.

A Yoruba adage says, ‘the elderly does nothing with the age difference but to cheat the younger one’ and it is one cheating you cannot contest for as long as it constitutes no harm. Dagnabbit, I love the Yoruba Race!

Now, there are certain practices, even in the western world, where the place of respect or compassionate humanity is sacrosanct, not necessarily through an act of law.

Take for instance in London, whenever you are on the train or bus and an elderly person, a pregnant woman or someone with babies comes in, people immediately get up without prodding and yield their seats outright.
That, for me, speaks to the kind of culture I’m talking about.

In fact, the physically challenged have their space and you dare not encroach. To be honest, I don’t know if there’s any law that governs this practice or it is just a practice that everyone has come to embrace, because I don’t live there, yet, you see it happen every time, race regardless.

A few times I’d flown locally with different people – popular or unpopular and my seats were taken. I just sit and go on with my life. I’d experienced this too on international flights. What does it matter? There are occasions that cabin crew would approach some people and plead for them to leave their seats for some others on different grounds and this practice has never elicited undue obstinacy from the individuals so approached.

The last time I was on a flight with the Minister of State for Aviation, Hadi Sirika and he had a big carry-on bag that could not sit in the overhead locker directly over his seat, he walked up to me, asked if he could move my bag to somewhere farther from where I was and put his bag in my space, I simply obliged him. Kini big deal? There was no other engagement outside of that.

For crying out loud, Prof didn’t make a fuss about the seat in question and you insisted he must leave, haba! Who raised you, bro? Even if you lived your entire life abroad, and so what? There are decent people in different parts of the world, who were properly and better raised and would not make a fuss over such a simple situation. It’s your seat, yes. You paid for it, kaabo! And so?

This is not about entitlement mentality as some had tried to sum it up but a culture of respect, which the age difference emphasises especially, in the African setting. The young man and his generation deserve genuine pity. That was so un-African and belies all the logic of the pretexts so far advanced by those who share his sickening irreverence.

Some ages ago – in the medieval Yoruba locale – such a chap would have been sent home with some very ‘strong message’ as take-home gift by some ‘wicked elders’, not even necessarily the one directly involved, but those eager to try out their new metaphysical powers on errant characters like him.

But with time, elders, who have their likes at home as their own kids, also always overlook such character deficiencies and just smile. That’s exactly what Prof did here!

The rage against Buhari’s Chief of Staff, Abba Kyari

Robert, Tony, Aliko, Dino And Us