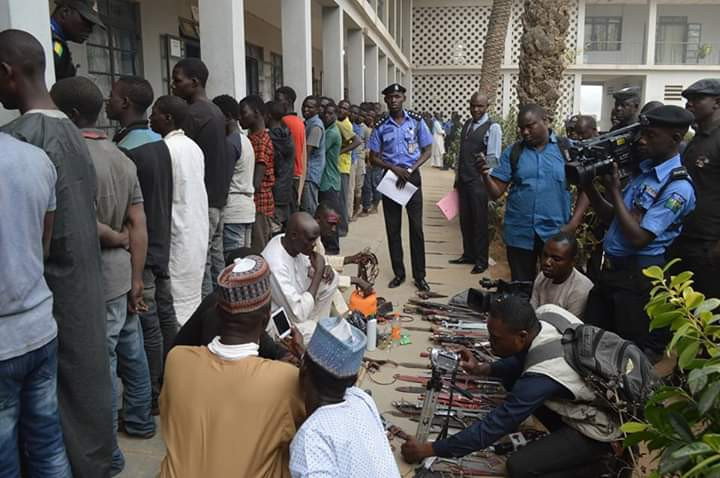 The Kano State Police have confirmed the arrest of 50 suspected political thugs in connection with attack on innocent passersby during PDP Presidential Campaign in the state.

“The Kano Police Command is pleased to intimate and update the general public on the rampage behavior of some thugs during the 10th February 2019 PDP Presidential Campaign held at Sani Abacha Stadium Kano. Some thugs armed with various forms of weapons went berserk and started attacking innocent passersby and dispossessing them of their belongings including GSM phones, money and other valuables,” Mohammed said.

“50 suspects were so far arrested while exhibits of weapons including knives, cutlasses, cudgels, sticks, swords, suck and die, dried leaves suspected to be Indian hemp and other intoxicant substances, and GSM phones were recovered from them. Investigation into the incident is in progress while suspects arrested will all be charged to court for prosecution thereafter.
Members of the General public especially Politicians are sternly warned to stop using thugs, weapons and intoxicants during rallies and other activities or face the full wrath of the law, please.” He added.

Two decades after, Nigerian widow Esther Kiobel testifies against Shell in The Hague

Nigerian drug importer fighting deportation in Sydney cons US pensioner out of $400k before convincing him to import 2.5kg of cocaine into Australia