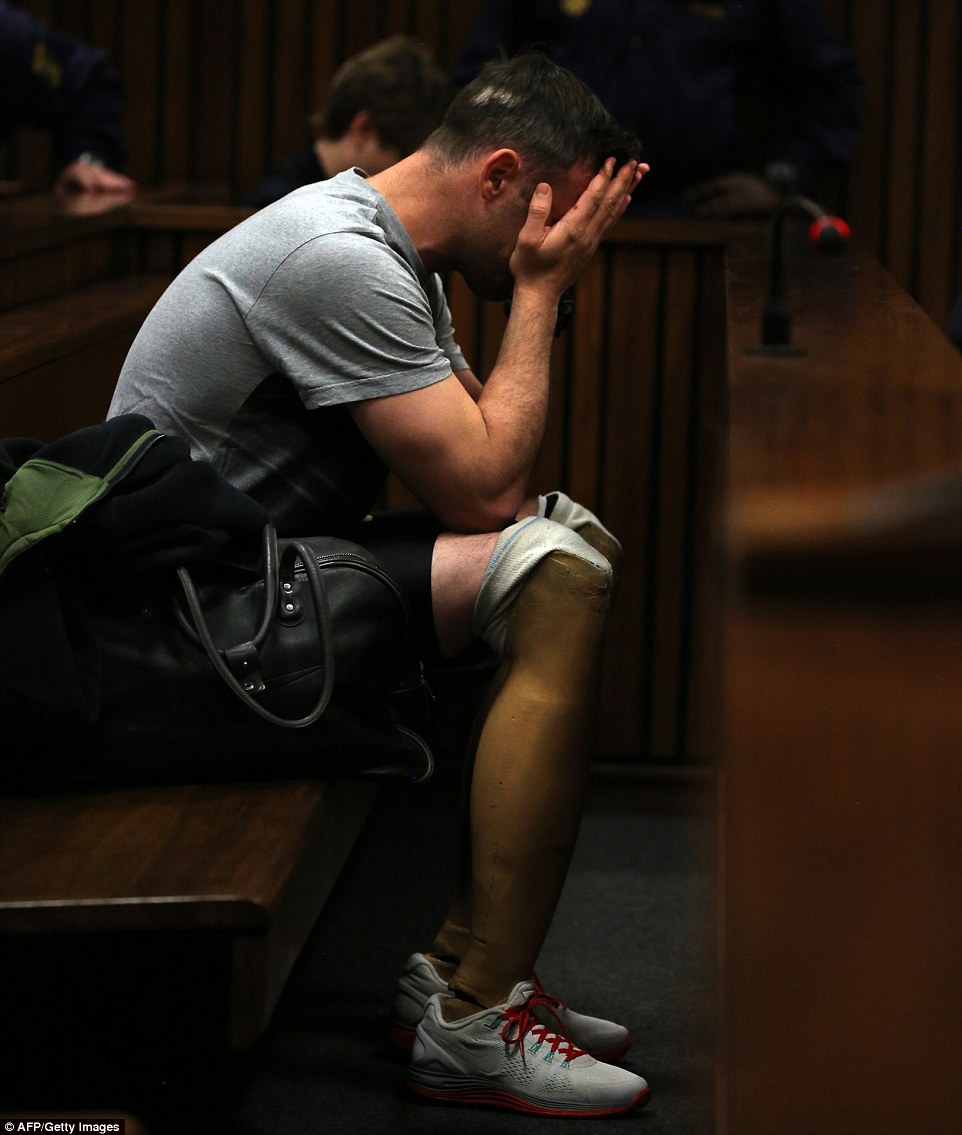 Oscar Pistorius teetered pathetically on his stumps in a packed court room today in a desperate last bid to convince the judge he was too vulnerable to have killed his girlfriend intentionally.

The athlete, known as the Blade Runner, looked humiliated when he was asked to remove his prosthetic limbs to expose his stumps to the televised hearing which will decide his murder sentence.

There was an awkward moment when Barry Steenkamp was forced to stand to make way for his daughter’s killer as he left the dock for the dramatic demonstration.

His T-shirt wet with sweat and his red eyes filled with tears, Pistorius paused at the side of the court to remove his prosthetic limbs in the full view of the packed court.

The spectacle of the one-time sporting superstar tottering across the court room prompted a number of family members, fans and members of the public to break down in tears. 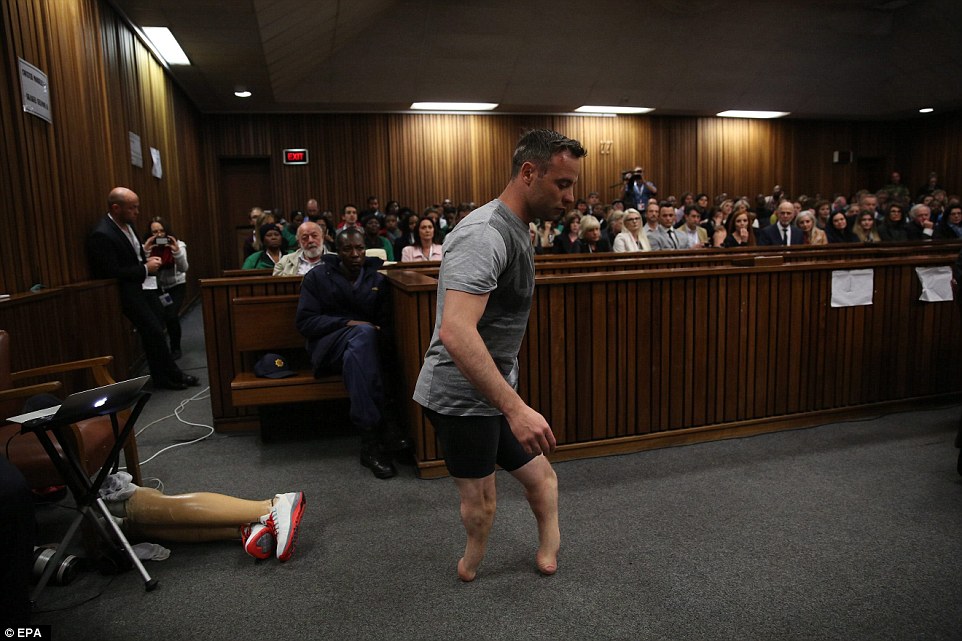 Loud sobs echoed around the wood-pannelled room as all eyes watched Pistorius move unsteadily, and much dramatically reduced in height, towards the front of the court.

As he struggled to stand still in front of the judge, and in the glare of live television coverage, a cameraman had to step forward to support him.

His therapist leapt to his aid, guiding him towards the front bench of the court which he clutched to maintain his balance.

Pistorius, 29, appeared so humiliated by the demonstration that he could only stare at the floor, tears flooding down his cheeks, as his lawyer told the court how he did not wish ‘to hide behind his fame

When the strain of tottering became too much, he knelt down on a cushion before wiping his eyes with a tissue passed to him by one of his legal team.

Pistorius’s sister Aimee, and his close friend Jenna Edkins, wiped tears from their eyes at the excruciating demonstration of the athlete’s vulnerability.

Mr Steenkamp, 72, then had to stand for a second time to allow the wretched Pistorius to return to the sanctuary of the dock where he bent over, his powerful shoulders shaking as he sobbed. 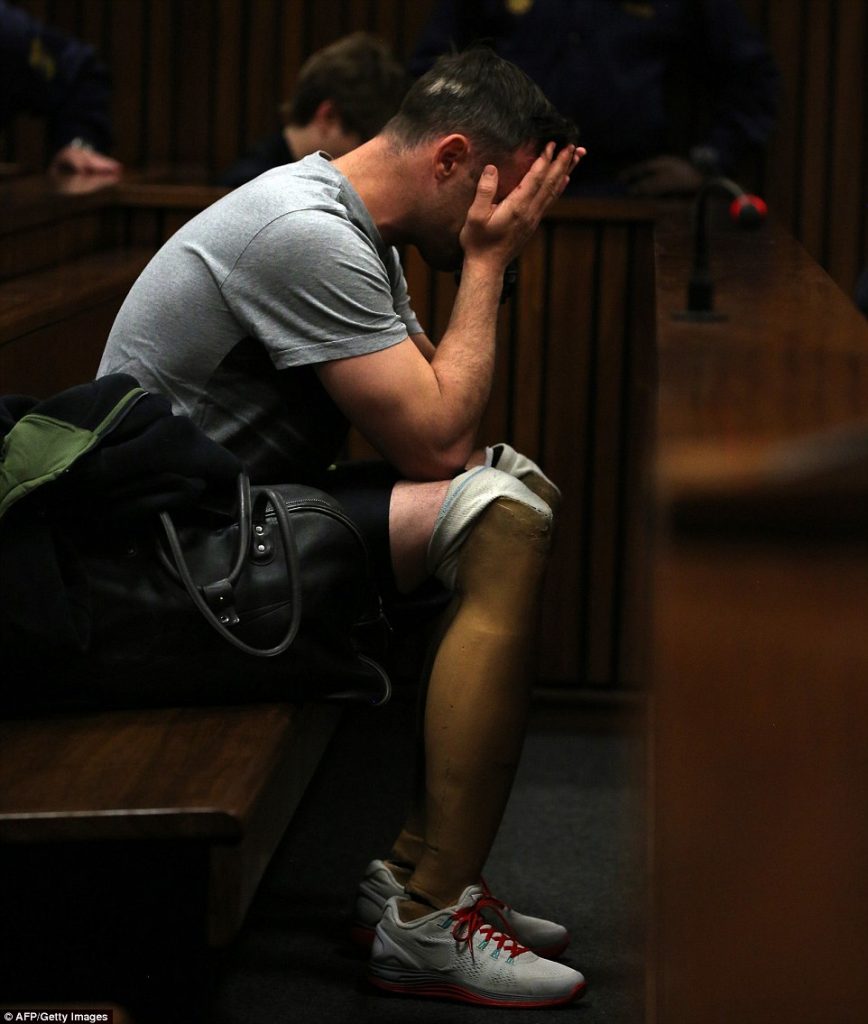 Closing his powerful argument in favour of leniency, Mr Roux reminded the judge that punishment was ‘not meant to break the offender’.

Pistorius was born without fibulas – calf bones – and at 11 months old, his parents made the difficult choice to have both of his legs amputated below the knee, enabling him to be fitted with prosthetic legs.

Doctors told his parents that the operation would be less traumatic before their son learned to walk.

During his evidence in the witness box, Pistorius described the discomfort of wearing prosthetic legs, or his iconic carbon blades, and the sores that he had to tend on a regular basis.

His sentencing hearing heard how his stumps became infected while in jail.

Earlier, Reeva Steenkamp’s cousin today described the enduring ‘scars’ left by the model’s death on her family as she gave evidence at a hearing to decide Oscar Pistorius’s sentence for murder.

Kim Martin, who gave evidence as Miss Steenkamp’s ‘voice’, told the court how ‘every celebration’ had ‘become a funeral’ in the wake of the fatal shooting three years ago.

The mother-of-three told Pretoria’s High Court that ‘every single day, no day goes by where I don’t think about her’ as she sought the harshest punishment for the Paralympian.

She added: ‘I am coping, getting on with my life, but the scars and the effects runs very, very deep.

‘We will never get over it. But I am the mother of three children, I have to give them hope for the future.’

Mrs Martin previously told how Miss Steenkamp’s shooting had ‘ruined our whole family’ during the runner’s sentencing hearing for manslaughter.

That conviction was upgraded to murder in December last year and punishment for that more serious crime is now being debated at the High Court in Pretoria.

Pistorius is facing a minimum of 15 years behind bars for the murder of his 29-year-old girlfriend on Valentine’s Day three years ago.

Mrs Martin, whose father is the brother of Reeva’s father, told Judge Thokozile Masipa how Valentine’s Day was a painful time for her family.

Watched from the dock by Pistorius, Mrs Martin said ‘it was very unfair’ that the one-time hero had chosen to give a television interview rather than speak at this week’s proceedings.

‘I am not happy about that at all, it’s very unfair to want to talk to the world when you have had the opportunity in court to do so. It’s hurtful and I can’t understand why.’

Pistorius watched her keenly from the dock in contrast to Barry Steenkamp whose evidence he could barely bring himself to watch.

She described the ‘guilt’ of her uncle Barry – who gave moving testimony to the court yesterday – who had been left ‘broken’ by his terrible loss.

‘He is a broken man. He lives day to day on his phone watching the posts about Reeva.

‘He has the guilt of a father not being able to protect his daughter. It is very difficult for him,’ she told the packed court house.

She also said she first saw her own father cry for the first time ever when he learned of Miss Steenkamp’s death at the hands of the Paralympian.

During brief cross-examination, the sprinter’s lawyer Barry Roux told Mrs Martin that although he had not subjected her uncle to questioning he said ‘there comes a point when we have to draw a line’.

He then proceeded to read from interviews close friends of the model had given in the days and months after her murder in which they had spoke positively about Pistorius and his relationship with Reeva.

Since then, however, the double amputee had become ‘a villain’ and everyone had changed their versions, he added.

He quoted from an interview with Reeva’s close friend Samantha Greyvenstein, who told a reporter: ‘She told me Oscar was amazing and he treated her like gold.

‘She told me she really liked Oscar… she often mentioned how happy she was,’ the court heard.

Arguing for a reduction in the recommended 15 year sentence, Mr Roux told the judge that there is ‘substantial and compelling evidence allowing for deviation from minimum’.

He referred to the case of a former Springbok rugby player, Vleis Visagie, who accidentally shot and killed his own daughter, also believing she was an intruder, did not even stand trial.

He said the case was charged with ’emotion’ which meant objective facts were being ignored.

The ranks of Pistorius’s extensive family nodded keenly as Mr Roux made an impassioned appeal for leniency from the judge, who presided over the sprinter’s seven-month murder trial.

Her application of the law in the case was later criticised by the Supreme Court of Appeal when they overturned the manslaughter conviction she had handed down and replaced it with one of murder.

Despite her ‘flawed’ ruling, the judge now has the sole responsibility for deciding the athlete’s punishment.

If Pistorius’s lawyers regard the sentence handed down as too severe, they are likely to launch an appeal against it.

The state also has the right to challenge a punishment they believe to be too light.

Yesterday, Mrs Martin’s uncle, Barry Steenkamp, Reeva’s father, broke down repeatedly as he also shared the impact of her murder with the hearing.

In heart-wrenching testimony, he urged the judge to show the world pictures of his daughter’s gunshot wounds so everyone could see the pain Pistorius had inflicted on her.

Mr Steenkamp, 72, also described how he repeatedly self-harmed himself with this diabetes needles in order to ‘feel some of the pain’ that his daughter had suffered as she bled to death.

The retired racehorse trainer broke down repeatedly in the witness box as he laid bare the devastating impact his only daughter’s death had had on his life.

‘I think of her every day of my life, morning, noon and night, in the early hours of the morning, I think of her all the time,’ he told a sentencing hearing that will decide what punishment Pistorius will face for killing the 29-year-old.

He described his wife June’s devastation, adding that ‘people say that June is ‘stone-faced’ but I know that June grieves like I do all the time.

‘She is probably a bit stronger, I hear her crying at night time and talking to Reeva and of course she feels just as much as I do.’