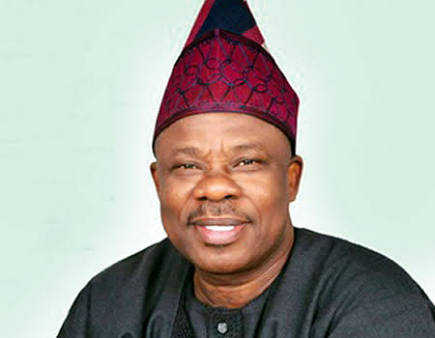 Islam and Christianity encourage well meaning and influential individuals to reach out to people with gift items that will make them have joyful celebrations.

In line with his long standing tradition, Prince Dapo Abiodun had distributed thousands of rams and other food items as well as cash to party faithfuls and others that may not be able to afford the items. This was to enable them enjoy their Sallah celebrations with family and friends despite the prevailing harsh economic conditions.

The governor of Ogun State Senator Ibikunle Amosun who may have become uncomfortable with Prince Dapo Abiodun’s recent political moves, reportedly issued a directive to the State party chairman, Chief ‘Derin Adebiyi and all the 20 Local Government Chairmen in the state not to receive any Sallah gift from Prince Dapo Abiodun.

A leader of the party, who pleaded anonymity, revealed that the Amosun gave a stern warning to all party Executive Committee members across the state against collecting the “Ileya” items from the oil magnate and by extension, steer clear of anything that has to do with his gubernatorial aspiration.

For those who don’t know, Prince Dapo Abiodun is a close friend of Governor Ibikunle Amosun, and their relationship dates back to two decades.

“With this understanding, we are still wondering what could have led Governor Amosun to this kind of move against his bosom friend. One wonders if it is not unconnected with Dapo Abiodun’s governorship declaration.

“By this action and some other recent covert moves made against Dapo Abiodun by Amosun, one is tempted to ask and find out if he is truly afraid of Prince Dapo Abiodun,” said a source.

Future events would provide answers to this question as party faithfuls keenly await the attendant drama as it unfolds.

How Skye Bank Rendered Over 3000 People Homeless In Lagos