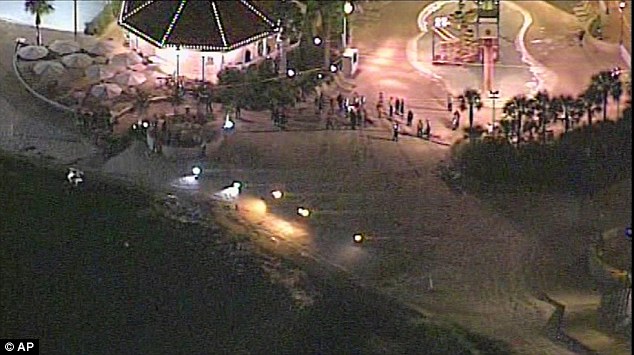 A two-year-old boy is missing after he was dragged into a lagoon by an alligator at the Walt Disney World resort in Orlando – despite his father’s frantic attempts to wrestle his son from the reptile’s jaws.

The boy was dragged into the Seven Seas Lagoon near the upmarket Grand Floridian Resort & Spa around 9:20pm on Tuesday as he paddled in a foot of water with his parents and four-year-old sister – despite ‘no swimming’ signs being posted nearby.

Sheriffs say there is little hope of finding the boy alive after his father’s unsuccessful struggle with the seven-foot reptile, which also left him with lacerations to his arm.

Alligators are a relatively common sight at the resort but are removed and relocated when they reach four feet and get too close to guest areas.

Wildlife officers on Wednesday morning confirmed that they had already captured and killed four alligators in the lagoon while searching for the child, but none of them were the one that grabbed the boy.

During a news conference today, Nick Wiley from the Florida Fish and Wildlife Conservation said that the organization works closely with Disney to remove all nuisance alligators.

He added that they had already taken four alligators while searching for the boy, which were analysed for evidence and then euthanized.

Wiley also explained he was certain that they would find the boy, but added that it may take some time.

Meanwhile Jeff Williamson, a spokesman for the Orange County Sheriff’s Department said they were determined to find the boy in order to bring comfort to his family.

He said they were doing everything possible to find the child and that they still regarded the effort as a ‘search and rescue’ operation.

New sheriff’s deputies were brought in Wednesday morning to bring ‘new eyes’ to the search, on the ground and in the air. Alligator trappers and divers were also called in to help.

Earlier, Orange County Sheriff Jerry Demings said the toddler, who was part of a family of five, arrived in Orlando on vacation from Nebraska on Sunday.

He told a news conference last night that the parents and their three children had been on the beach at the time of the attack. 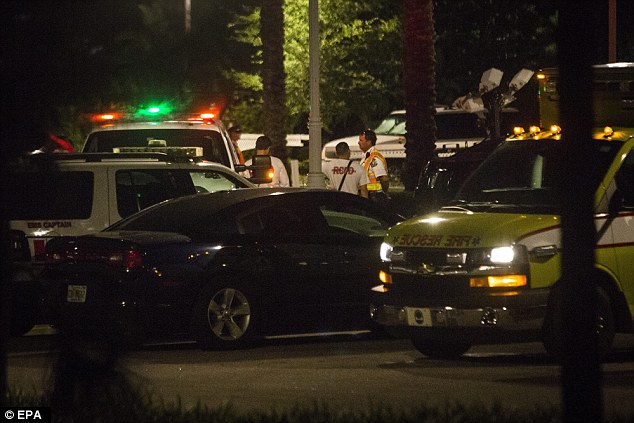 The boy was dragged into the Seven Seas Lagoon near the Grand Floridian Resort & Spa around 9.20pm on Tuesday. Above, police officers and emergency teams at the scene

He said that the family had been enjoying a ‘movie night’ and the child had been in a play pen.

Later, as the boy played, he waded in about one foot of water with his mother and the alligator – believed to be anywhere between four and seven feet long – attacked.

‘As they waded into the water along the lake’s edge at the time, that’s when the alligator attacked,’ he said.

He added that the family alerted a nearby lifeguard but they were not able to save the boy. The father was left with scratches after the ordeal.

‘We are not leaving until we recover the child,’ Demings added, saying there were more than 50 law enforcement personnel who are actively searching the lake.

‘The sad reality of it is it’s been several hours and we’re not likely going to recover a live body.’

As a father, as a grandfather, we are going to hope for the best in these circumstances but based on my 35 years of experience, we know that we have some challenges ahead,’ he said.

Demings said there had been no other recent reports of similar alligator attacks on the lake.

‘We have no record of this happening before,’ he added.

Asked about the recent tragedies that have rocked Orlando in recent days, including the murder of singer Christina Grimmie after a concert and the massacre at Pulse nightclub that left 49 people dead at the hands of a lone gunman, Demings replied: ‘Our staff are very resilient.’

‘They are very focused, if you will, on assisting this family,’ he added.

A spokeswoman for Disney also spoke at the conference, saying: ‘Everyone here at Walt Disney World is devastated by this tragic accident.

‘Our thoughts are with the family. We are doing everything we can to help law enforcement.’

Chad Weber, with Florida Fish and Wildlife, said that the agency had sent alligator trappers to aid the operation.

‘We would like to express thoughts and prayers to the family at this time,’ he said. ‘We will be here until the child is found.’

In a statement issued late on Tuesday night, Orange County Sheriff’s Office’s spokeswoman Rose Silva said the Sheriff’s Office received a call about an emergency at the scene at 9:21pm.

Florida Fish and Wildlife, Reedy Creek Fire Rescue and the Sheriff’s Office responded and a search and recovery operation for the child is underway, she said.

Shortly afterwards, authorities were pictured sealing off the area with crime-scene tape and searching the water by helicopter and by boat.

Late on Tuesday night, a man named Christian wrote on Twitter: ‘Just overheard a group talking about how the father was wrestling with the alligator. This just gets worse and worse.’

Guests were all asked to leave a hotel balcony overlooking the area by staff, he added.

Others said the family had been watching the Wishes fireworks spectacular, which starts at 9pm and runs for more than 12 minutes, at the time of the reported attack.

Christal Hayes, a reporter for the Orlando Sentinel, wrote on Twitter: ‘A lot of the crowd says the boy was on a beach area along the Seven Seas Lagoon when he was dragged in. No eye witnesses, though.’

‘I can’t imagine what those parents are going through. It’s been one tough week in Orlando.’

The Grand Floridian Resort is one of three luxury hotels located along the lagoon’s edge. It is a stop away from Magic Kingdom Park on the monorail line.

No one should be bullied for their sexuality’: Prince William speaks out over gay bashing as he becomes first royal to be Attitude magazine cover star