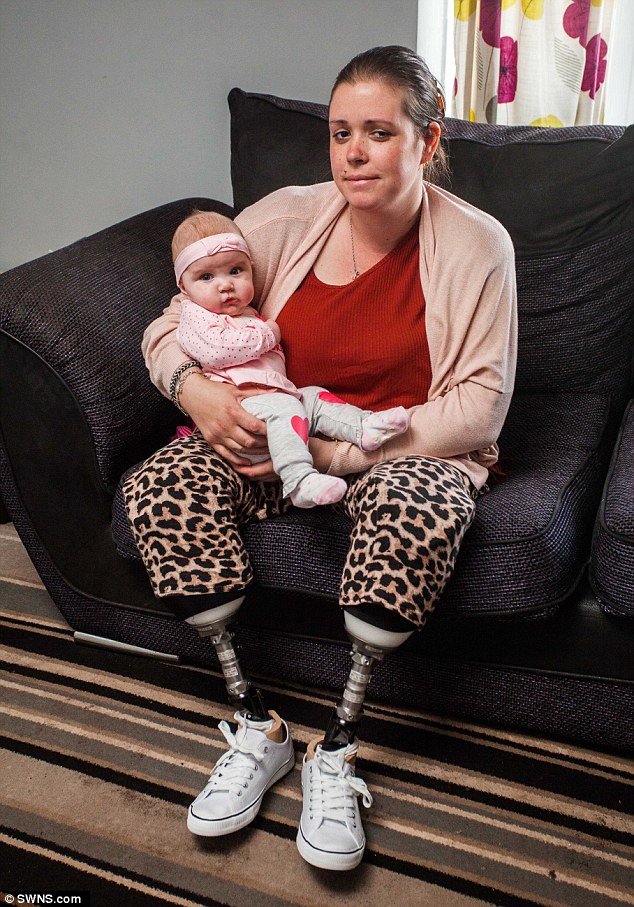 A mother-of-eight who went into hospital to give birth has told of the trauma she went through after waking up six days after her C-section to discover both her legs had been amputated.

Ella Clarke, 31, from Torquay, Devon, thought she was coming round from her caesarean but she was left devastated as doctors informed her that after five days of being in an induced coma they had made the decision to remove her lower limbs.

The mum and her partner Ian Ross, 32, a mechanic, are now terrified about what the future holds as she’s left wheelchair-bound.

‘Going into hospital to have a baby should have been the best moment of my life,’ she said. ‘Instead my world has been shattered. 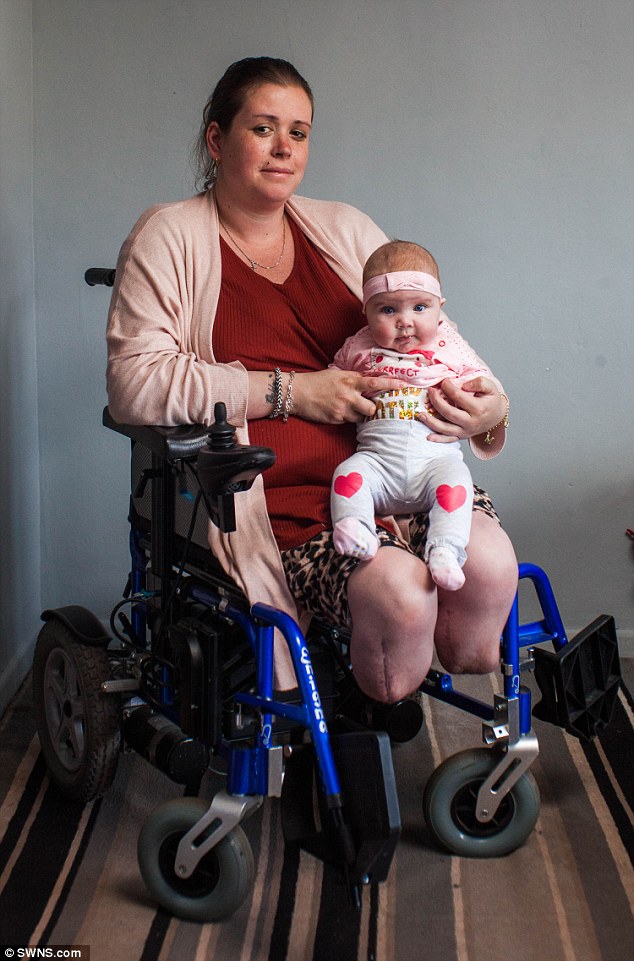 ‘I was an active mum doing the school runs and chasing my family around the garden. Now I’m the complete opposite.

‘I might never be able to run after my children, or stand next to them. No human being should ever have to experience this after it could have so easily been avoided.’

Ella has instructed to a solicitor who is now now acting on Ella’s behalf to launch legal action against the Torbay and South Devon NHS Foundation Trust.

Ella says how she always wanted a large family and had her first child Abbie, now 13, at the age of 18 with a chIldhood sweetheart.

After the relationship broke down, Ella met husband Ian in 2005. A year later, the pair started dating and decided they both wanted a big family.

She said: ‘I was a baby-making machine, but we loved our growing family. We had seven amazing children and were such a close family.

‘Ian is a fantastic dad and a doting partner. When he popped the question in 2010 I was over the moon.’

‘We decided to stop using contraception and if it happened, it happened,’ she said. ‘I loved being an active mum and would take the kids swimming, to the park and on adventure walks.’

In March 2015, just eight months after having Freddie, it ‘happened’ again.

She said: ‘I started having morning sickness and did a pregnancy test. It came back positive and I was four weeks pregnant.

‘We were delighted. To be honest I could have just kept going and going. I love being a mum and running around after my children. It’s the greatest feeling on earth.

‘People thought we were mad having such a huge family, but we couldn’t be happier.’

At the 20 week scan the midwife informed them she had low lying placenta, more commonly known as placenta previa.

If not given proper attention, the condition can cause trouble at the time of delivery due to excessive bleeding and a C-section section may be needed.

Ella was monitored throughout the pregnancy and doctors decided she would need a C-section when the time came.

But the happy couple were excited to also find out they were having a little girl.

She said: ‘Because I had a traumatic labour when I was 18 with my first child, I’d had six caesareans through choice with every other birth. But this time I was told I needed one for medical reasons.

‘It was the first time I’d suffered from placenta previa but I wasn’t nervous about being cut open again to have a baby – as I was a pro by now.’

Despite her condition, as the months passed Ella describes her pregnancy as ‘normal’. But at 36 weeks, she began to bleed and was taken to Torbay Hospital in Torquay.

Doctors informed her the baby was fine, but it was time to have the C-section.

She said that having been through six C-sections already, she was aware of the risks and signed the consent form.

‘I wasn’t worried at all, I was just excited about meeting my little girl,’ she said.

‘I remember telling Ian as they sedated me that I was so excited. We were dreaming of a family holiday with with our children – all eight of them.’

In December 2015, doctors delivered Winter Rose weighing 6lb 5oz, but half an hour into the procedure Ella began to lose a lot of blood.

She lost six litres of blood due to a dangerous complication called placenta accreta which can be common with women who have had C-sections in the past.

The placenta grows on the uterine wall and is more likely to attach itself to the wall when there’s scarring from previous caesarean sections. The condition increases the risk of haemorrhage, and can even leave other organs damaged.

Doctors performed an emergency hysterectomy on Ella and gave her five blood transfusions – which in almost all cases of placenta accreta is required to save the mother’s life.

She was then placed in an induced coma and transferred to intensive care.

Doctors then had to monitor her hourly for the next 24 hours as one of the condition’s dangerous side effects is that it causes problems with blood clotting.

She said: ‘I had no idea what was going on. I was put to sleep for the C-section and then put immediately into an induced coma when things started to go wrong.

‘I now know it’s common for blood to clot in the legs in this situation, so it was imperative they monitored me every hour.’

But she alleges that doctors forgot to check her and six hours passed before she was seen. By this point, the blood in her legs had clotted and circulation had stopped – starving her lower limbs of blood supply.

Still in an induced coma, Ella was rushed into theatre where two surgeons battled to recover circulation in both legs.

But it was too late, her tissue was giving off poisonous toxins that could be potentially fatal. If doctors didn’t act quickly it would spread to other areas of her body and her heart would stop.

In that moment doctors decided to amputate both her legs below the knee. It was a decision that would save her life, but also change it forever.

Doctors informed Ian of the situation and although he was ‘shocked’ and ‘devastated’ he told them to do whatever it took to save her life.

After eight hours of surgery Ella was taken to recovery, and five days later she woke up from the induced coma.

She said: ‘I remember the moment I woke up. I thought I was waking up from my C-section. I expected my beautiful little baby girl to be passed to me. I had no idea I’d been in a coma.

‘Instead I was told doctors had amputated my legs after complications with my C-section. At the time I was in a haze of medication and I don’t think it really sunk in.

‘But the reality of the situation soon started to hit home when Winter Rose was placed in my arms and my restricted future flashed before me.

‘I remember tears rolling down my cheeks and Ian cuddling me. He was crying too.

‘I had so many questions running through my head. But when my daughter was brought to me all of those faded away for a moment.

‘Winter Rose was amazing and every bit as beautiful as I’d envisaged. We checked ourselves out of hospital after 23 days and I was a mix of devastation and appreciation.’

In March 2016, Ella received two hours of counselling and prosthetic legs, which after 10 hours of physio she is still trying to get used to.

She said: ‘I went from being an active mum to instantly wheelchair bound. I couldn’t stop crying.

‘My five-year-old couldn’t look at me without a blanket on because she was scared and my eldest daughter starting falling behind at school. My family was falling apart and I was helpless.’

Ella and Ian demanded answers and a meeting was set up with Torbay Hospital in Torquay.

The couple were informed of the hospital’s oversight and were issued an apology.

She said: ‘I finally got my apology, but it was five months too late.

‘I have eight children to look after, what life can I have now? This has impacted us far worse than you can ever imagine.

‘One of my children are worried every time I have to go back into hospital for a check-up. They think I might lose another limb.

‘A thoughtless oversight has cost me so much. I will never stand on my own two feet again and that makes me shudder.

‘I knew the risks of blood loss, but I never expected to wake up three days later without my legs.’

She says she believes that if doctors had been checking her hourly, she’d be fit and ‘be able to play with my beautiful five-month-old baby like any other normal mother.

‘Instead I’m a shadow of my former self and my kids are now scared to cuddle me because my stumps scare them.

‘I’m now sleeping downstairs in the living room and trying to get used to walking with prosthetic legs, but it’s challenging. I’m having counselling to cope with the shock but my whole life has changed forever.’

A spokesman for Torbay and South Devon NHS Foundation Trust said: ‘We would like to offer our sympathy to Ms Clarke.

‘We are carrying out a full and thorough investigation and at this time it is not appropriate for us to make further comment.

‘We are in regular discussion with Ms Clarke and her partner to ensure they are kept up to date.’

Horror at Disney World as boy, two, is dragged into a lagoon by an ALLIGATOR