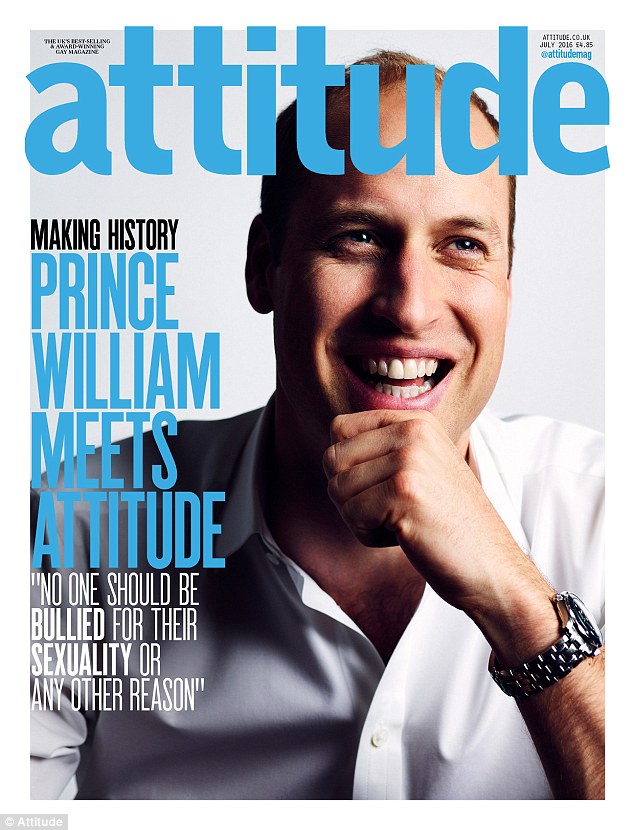 Prince William has become the first royal to feature on the front of a gay magazine.

His Royal Highness appeared as this month’s cover star of Attitude, a lifestyle magazine for the LGBT community, as he spoke out against homophobic bullying.

The colour cover shot, taken by photographer Leigh Keily, shows a relaxed William in an open-necked white shirt, laughing as he rests his chin on his left hand.

In an interview to go with the cover shoot, he hits out at bullies who target the gay community, saying: ‘No one should be bullied for their sexuality

Prince William is this month’s cover star of Attitude magazine. It is the first time a member of the Royal Family has been photographed for the cover of a gay publication

He then called on young people being bullied for their sexuality to seek help.

The Duke revealed yesterday that would be appearing in Attitude after signing a book of condolence for victims of the gay nightclub shooting in Orlando which left 49 people dead and dozens of others wounded.

He said: ‘The young gay, lesbian and transgender individuals I met through Attitude are truly brave to speak out and to give hope to people who are going through terrible bullying right now.

‘Their sense of strength and optimism should give us all encouragement to stand up to bullying wherever we see it.

‘What I would say to any young person reading this who’s being bullied for their sexuality: don’t put up with it.

You should be proud of the person you are and you have nothing to be ashamed of.’

William had invited the magazine to bring members of the LGBT community to Kensington Palace in May to listen to their experience of bullying and the mental health affects it can have.

During the meeting, the group spoke with William about how bullying over their sexuality had led to low self-esteem, suicide attempts, eating disorders, depression and drug addiction.

They spoke about the case of one young man who died after an unintentional overdose.

Matthew Todd, editor of the magazine, added: ‘During my time as editor of Attitude I have met parents whose child has taken or lost their life after being bullied for being LGBT+ or even just perceived to be LGBT.

‘I am very happy that the future King of The United Kingdom agrees this must stop and I would urge parents in particular to raise their voices in their communities to ensure that every school protects – really protects – all children.’ 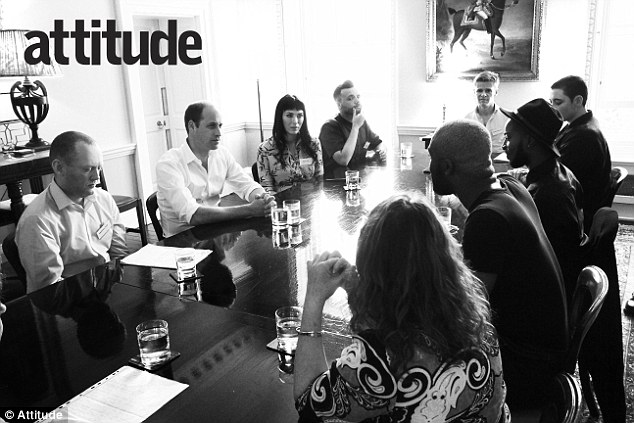 Attitude was founded in 1994 and is the UK’s biggest-selling gay magazine with a circulation of around 60,000 issues per month, including digital.

It was previously owned by Vitality Publishing but has since been sold to private investors, with Attitude Media Ltd listed as the current owner.

The magazine has featured just as many straight celebrities on its cover as those who are openly gay over the years, with iconic figures such as David Beckham, Brad Pitt, George Clooney, Lady Gaga and Prime Minister David Cameron all appearing.

Attitude also became the first gay publication to feature an interview with the prime minister in 2005 when it spoke to Tony Blair.

Alongside celebrity interviews, the magazines covers serious topics such as the issues facing gay asylum seekers, US presidential elections and male rape.

A Kensington Palace spokesman said: ‘The Duke of Cambridge is working hard to support the fight against bullying and to help break the stigma around mental health. He has established a taskforce on the prevention of cyberbullying and along with The Duchess of Cambridge and Prince Harry is leading the Heads Together campaign on mental health and well-being.

‘He knows that LGBT young people suffer unacceptably high rates of bullying and he was grateful to Attitude for facilitating such a serious conversation on this topic. He was moved by the stories he heard and impressed by the positivity and courage of the people he met.’

The Duke has set up a taskforce to tackle cyberbullying and, with the Duchess of Cambridge and Prince Harry, has launched the Heads Together campaign on mental health and well-being.

The PACE RARE report from report also found that 57.1 per cent of LGB people had self-harmed at least once compared to 38.3 per cent of heterosexual young people.

Related Topics:Prince William
Up Next

Horror at Disney World as boy, two, is dragged into a lagoon by an ALLIGATOR