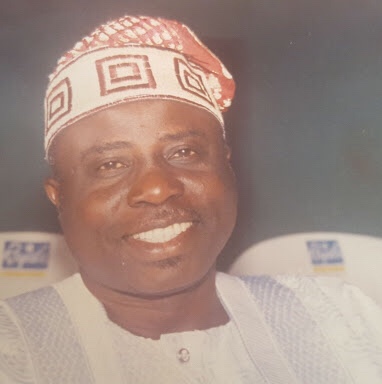 Former Executive Chairman of Ado-Ekiti Local Government in Ekiti State, Chief Adebisi Adegboyega Egbeyemi, a lawyer, has been nominated as the deputy governorship candidate of the All Progressives Congress (APC) in Ekiti State.

After a long search for the candidate, Egbeyemi was picked as the candidate this evening after party leaders met for long hours to consider who is best suited to pair with former Governor and immediate past Minister of Mines an Steel Development, Dr Kayode Fayemi, to fly the party’s flag in the governorship contest.

Egbeyemi’s choice came after speculations by the expectant public spread that certain eminent indigenes of the state had been picked  to fly the ticket with Fayemi in the July 14, 2018 governorship poll.

Egbeyemi, an indigene of Ado-Ekiti, was born on May 8, 1944 to the family of the late Egbeyemi Alade and late Madam Tinubu Egbeyemi.

He studied privately while working as a Laboratory Assistant at Ekitiparapo College, Ido-Ekiti, and while working as a bursar at Notre Dame Grammar School, Usi-Ekiti, Egbeyemi sat as a private student to pass both the GCE O’Level and Advanced Level examinations.

He later proceeded to the University of Lagos College of Education where he graduated in Biology and Physical Education with distinction. He taught briefly at the St Mary’s Girls Secondary School, Ikole-Ekiti, in 1975 before he was transferred to the Teachers’ College, Oye-Ekiti, as a pioneer Physical Education tutor between 1975 and 1977.

He later went to the University of Ife to read Law between 1977 and 1980 before proceeding to the Law School in Lagos for his Barrister at Law certificate and was called to the Nigerian Bar in 1981 as a Solicitor and Advocate of the Supreme Court of Nigeria.

His political experiences spanned many fields, including the Youth Leader of the Unity Party of Nigeria (UPN) between 1979 and 1983; a member of the Ondo State House of Assembly in 1983; and Executive Chairman of Ado-Ekiti Local Government between 1991 and 1993.

Others include Leader of the United Nigeria Congress Party (UNCP) in Ado-Ekiti Local Government between 1996 and 1997 and was founding member of the Alliance for Democracy (AD), using the platform to win the House of Representatives election that was cancelled by the late Head of State, General Sani Abacha, in 1998.

Between 1991 and 1992, he was Commissioner of Education  and between 2001 and 2002, Egbeyemi was a member of the Governing Council of the National Teachers’ Institute, Kaduna.

A receiver of many awards, the lawyer was appointed the Commissioner for Justice and Attorney General between 2002 and 2003.

He was a founding member and Leader of the Action Congress in Ado-Ekiti Local Government and currently a foremost leader of the All Progressives Congress (APC) in Ekiti State.

A top chieftaincy title holder in Ado-Ekiti, Egbeyemi is married with children.