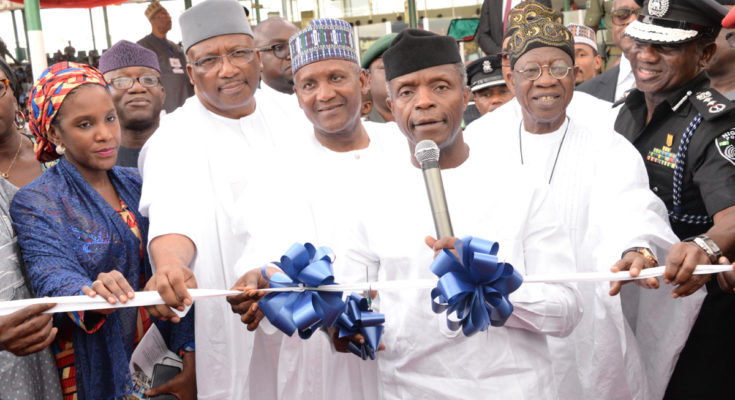 Speaking during the formal handover of the cars in Abuja on Wednesday, Chairman of the Foundation, Alhaji Aliko Dangote stressed that the gesture was as a result of his belief that security is essential to economic development.

Alhaji Dangote said that the vehicles were given to strengthen the Nigeria Police, adding:  “We are formally handing over a total number of 150 GAC saloon cars to the Nigeria Police Force in order to help boost their operational efficiency. I am told that today marks the single biggest number of operational vehicles ever donated to the law enforcement agency by a private organisation”.

“Considering the challenges government faces in meeting the entire needs of the populace for necessities like health, education and security, various Public Private Partnerships (PPP) initiatives have been developed. These are partnerships where the private sector collaborates with the public sector to provide services.”

Dangote said that the Foundation has been active in the four areas of Health, Education, Economic Empowerment and Disaster relief, and has been expending about N10 billion annually.

He called on other corporate organizations to rise up to the challenge of helping the security agencies in the country, saying that his Foundation made a N50 million donation to the Lagos State Security Trust Fund, and built the Police Intelligence Hostel Complex in Kwara State, all of which were part of the collaborations by the Foundation.

“Today, we are deepening our intervention in security with the donation of these 150 fully kitted operational vehicles to the Police Force. These vehicles will support the Nigeria Police Force in surveillance, crime prevention and promote law and order.”

In his remark, the Vice-President, Prof Yemi Osinbajo lauded the Dangote Foundation for the rare gesture and expressed the Federal Government’s appreciation to Alhaji Dangote for his untiring support to the government, adding that the donation of patrol cars to the Nigerian Police Force will help the Force in combating crimes across the country.

“There had been a lot of talks on private-public partnership, but as we can see Alhaji Dangote is walking the talk” the VP said.

Government’s role, according to him, is to provide the enabling environment while the private sector should take advantage of the opportunities that abound in the country to grow and develop the economy.

“The donation of 150 cars to the Nigerian Police Force is laudable and we thank Aliko Dangote Foundation for this rare gesture that is characteristic of the person of Aliko Dangote. He has shown over the years to be an entrepreneur with a difference, a man tha gives so much to the poor” he said.

The Inspector-General of Police, Idris Ibrahim expressed the appreciation of the Police Force to the Aliko Dangote Foundation, with a promise that the cars will be well utilized for the purpose for which they were donated.