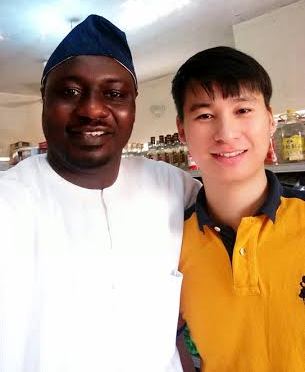 According to Nigerian journalist Jaafar Jaafar, the Chinese supermarket barred Nigerians from shopping after a robbery attack. See his post below:

“There was public outcry after a citizen reporter recently raised alarm in a Facebook post that a Chinese shop at Gwarimpa Estate barred Nigerians from shopping. A good friend of mine and bosom friend of the Chinese community in Nigeria, Mohammad Jamu, followed up the report and came up a different perspective. Writing in defense of his Chinese friends, Jamu wrote what was more of a script of Dankwairo’s praise poetry than a piece of journalism.
You’d draw the ire of professional reputation managers if you call it press release. When I raised doubt over his version of the story, Mohammed Jamu immediately called me and later took me to the shop to see for myself yesterday. MY FINDINGS/CONCLUSION One Hausa proverb says that if you are bitten by a snake, you become paranoid whenever you see a rope. From what I understood, the shopowners actually banned Nigerians from patronising the shop after a robbery attack. “Take a drink,” the shop owner said as a female attendant brought a glass carafe filled with hot concoction. “We are fasting,” we replied in unison.

The owner of the shop first narrated the armed robbery incident that left him and his wife injured. I asked the shopkeeper, his wife and the security guards several questions and drew inference that the initial account is actually true. But when the first report went viral, and Daily Trust made a follow up, they realised the implications of the decision to ban Nigerians. They quickly lifted the ban, issued a notice and invited their Nigerian friend to whitewash their action. Glad they quickly realise the implications of introducing apartheid in Nigeria”