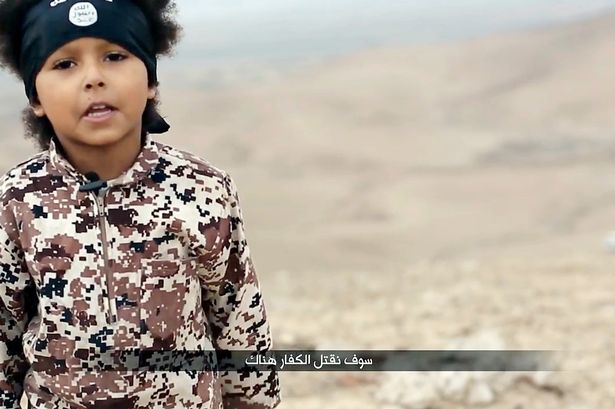 Sunday Dare, 59, is begging Grace, known as ‘Khadijah’, to bring the boy home after he featured in the terror group’s latest video

Horror: The boy in the ISIS video is the son of Khadijah Dare

The grandfather of a boy soldier – dubbed ‘Jihadi Junior’ – who appears in a new ISIS execution video has begged his notorious British jihadi daughter to bring him home.

Footage released online last night shows a masked Briton carrying out the brutal murder of five men he accuses of spying for the UK.

The horror clip ends with a child thought to be from the UK hailing the deaths, saying: “We will kill the Kuffar (unbelievers) over there.” 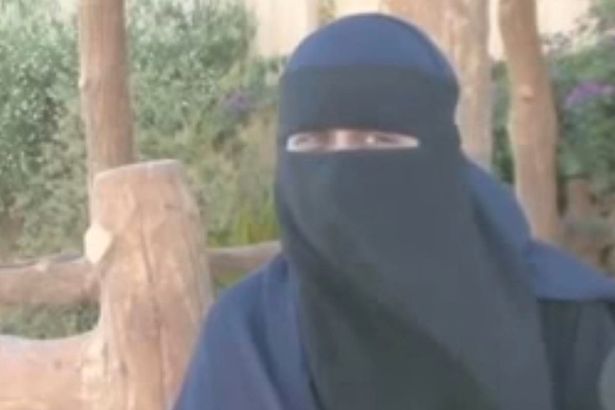 Militant: Khadijah Dare, a British mum who has aapeared in a violent video urging other women to join her

He added: “She should come back and face the music because she’s let herself down.”

He also said she has brought shame to the family.

Grace, 22, of Christian and Nigerian descent left her London home in 2012 to enter into an arranged marriage and live in Syria with her husband.

Mr Dare told Channel 4 News he had reported her to the police on three occasions before she left for Syria, telling them: “She’s behaving in a very funny way”. 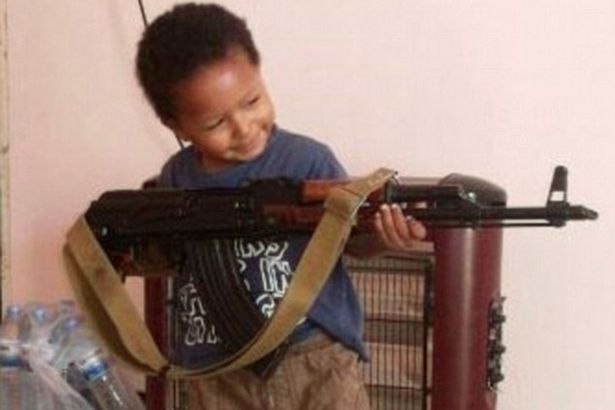 Victim: The little boy poses with an assault rifle

nd she achieved celebrity status in Islamic State after vowing to become the first female Islamic State fanatic to behead a British or US hostage.

In a video unearthed by The Mirror in 2014, burka-clad Dare fired an AK-47 rifle and pleaded with fellow Brits to fight by her side in Syria.

A security source said at the time: “The threat Dare poses is immense.

“Her notoriety has evolved so rapidly that she has achieved a celebrity like status among jihadists fighting in Syria and those who are thinking of travelling abroad to join IS.”

“The threat from homegrown would-be terrorists such as her is very great. Dare has now become a top priority.”

On her Twitter account – which has since been taken down – Dare posted pictures of her four-year-old son holding a machine gun. 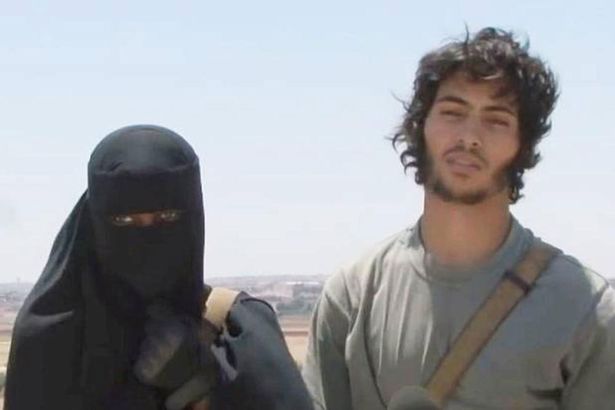 Partners in jihad: Khadijah Dare with her Swedish Isis fighter husband, who called himself Abu Bakr. He is believed to be dead

The boy would be roughly the same age and shares similar features to the child wearing military fatigues and an ISIS bandana in the new video.

The latest clip echoes the sickening executions featuring the British jihadist who became known as Jihadi John who was later killed in a drone strike.

The new ‘Jihadi John’ waves a gun as he mocks David Cameron and the RAF’s bombing campaign against IS in Iraq and Syria.

The sister of jihadi Abu Rumaysah says she will “kill him myself” if he is confirmed as the masked Briton.

Konika Dhar, from north London, said she does not believe her brother, formerly known as Siddhartha Dhar, is the man in the video, but she conceded the voice sounded “a bit like him”.

She said: “I don’t think it is, personally, to be honest.

The sister of jihadi Abu Rumaysah says she will “kill him myself” if he is confirmed as the masked Briton in a new Islamic State video in which five hostages are executed.

Konika Dhar, from north London, said she does not believe her brother, formerly known as Siddhartha Dhar, is the man in the video, but she conceded the voice sounded “a bit like him”.

She said: “I don’t think it is, personally, to be honest.”

The militant claimed the Government had “abandoned these spies” as the men are seen kneeling before they are shot in the head.

It comes days after Mr Cameron promised to crack down on IS sympathisers, stressing in a New Year’s message that all Britons should have “loyalty” to their country.

Pointing a handgun, the masked jihadi addresses Mr Cameron, saying: “How strange it is that a leader of a small island threatens us with a handful of planes.

“One would have thought you would have learned the lessons of your pathetic master in Washington and his failed campaign against the Islamic State.

“But it seems like you, just like your predecessors Blair and Brown are just as arrogant and foolish. In fact David, you (waves handgun) are more of an imbecile.

Whitehall sources suggested the latest video was an attempt to distract attention from recent military setbacks IS has faced, like losing the Iraqi town of Ramadi to state forces.

This was echoed by security expert Shashank Joshi, who said it was aimed at “threatening, goading and provoking” IS’s opponents in the West.

French hospital says a patient has died after taking part in an experimental drug trial, and 5 other participants remain hospitalized