Prosecution witness Michael Wetkas today told the Code of Conduct Tribunal (CCT) in Abuja that Senate President Bukola Saraki used Carlisle Property and Investment Company Limited to acquire a property located at Plot 2482 Cadastral Zone A6 Maitama Abuja.   He made this revelation during cross-examination by defence counsel Paul Usoro in the resumed corruption trial of the Senate President before the Code of Conduct tribunal in Abuja.

Wetkas explained that the property was acquired by the defendant through a company in which he stated in his asset declaration forms he had substantial and controlling shares.

Answering questions from journalists at the end of the day’s proceedings, prosecution counsel Rotimi Jacobs explained that counts 6-9 of the charges against Saraki deal with that same property.

He further reflected on the practice of using a company that is performing no work as a vehicle for acquiring property, only for the perpetrator to claim that the company is different from himself.

The prosecuting counsel made clear that at the end of the day, these the issues the court will decide.

Mr. Usoro had argued that the property in question was acquired by Carlisle, but not by defendant, as the prosecution asserts.

When asked about the delay tactics being employed by the defence counsel, Mr. Jacobs described the strategy as “unfortunate”.

“I have never seen a situation where a witness will be called and be cross-examined by three counsels representing only one defendant,” he stated, noting that Wednesday was the 10th day of the cross-examination of just that single witness.

He declared that the foot-dragging tactics were aimed at extending the proceedings for as long as possible to enable him Mr. Saraki to continue to enjoy his office as Senate president, a situation that has been called into question by the charges he is facing.

He ridiculed the defence counsel for asking the witness to read through documents, including those for which he was not responsible.  “Is that the purpose of cross-examination?” he queried. 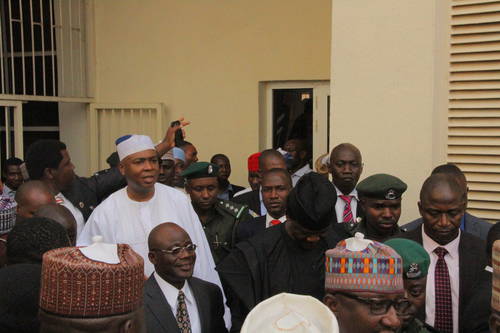 Mr. Saraki has continued to use such delays to slow down his trial, with Mr. Usoro asking questions that lack relevance to the issues under consideration.

Saraki has, however, relied on the permission of the court to make use of his large legal team to cross-examine the prosecution witness.

The court adjourned to a continuation of the trial to Wednesday, May 30.