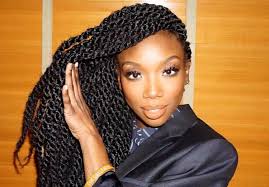 Singer Brandy, says she’s no longer interested in being a Mrs…that she’s satisfied being by herself.

The singer, who famously lied about being married to her child’s father, Robert Smith and then ended her engagement to producer Ryan Press in 2014 says she has no interest in ever getting married….

While co-hosting on The Real, Brandy, 36, said;

“I’m so satisfied being by myself. I love it. I’ve never taken this much time on myself. I haven’t been on a date in like a year. I just like me right now.

I just feel like the way it feels being by myself and taking care of my daughter and just doing my thing. I’m all about my career right now. I know I don’t want to go down that road.”