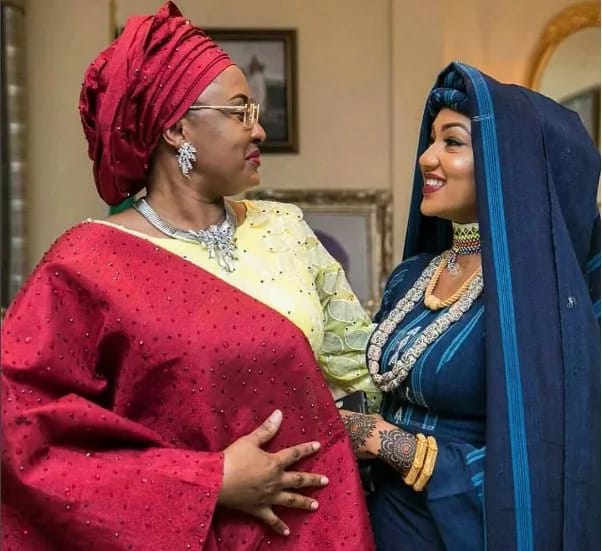 The wife of President Muhammadu Buhari, Aisha might appear simple and gentle, but behind those looks is a woman with a no-nonsense policy, who always ensures she has her ways whenever she desires.

This attitude played out at the wedding of her daughter, Zahra to Ahmed Indimi, son of billionaire owner of Oriental Energy Resources, Mohammed Indimi on Friday December 16, 2016.

Reliable sources that were at the glamorous wedding ceremony informed us that Aisha barred some sisters of Ahmed, Ameena Indimi Dalhatu,aka Yakata , her twin sister,Zahra, aka, Ya’Gumsu, and the estranged wife of Mohammed Babangida, who is presently in custody battle, Rahama from the wedding as she had negative impression about them, alleging that they had become an embarrassment to the presidency.

Aisha was said to have issued out a stern warning to the ladies not to bother to be at the wedding ceremony, promising to embarrass them if they come near the venue of the event.
Sources revealed that Aisha was put off by the undisciplined attitudes of the ladies, which we learned was the reason she pointedly warned Ahmed to keep elder sisters away from all the activities leading to the wedding ceremony until after he is officially married to Zahra.

“It was a big surprise to all of us, when we were told of what happened. The woman insisted that the sisters of Ahmed would not be part of the ceremony as she felt they had misused the opportunities they had and that there was no way she could accommodate them to the consternation of many observers,” said a source. The high profile wedding was unceremoniously shifted following the physical altercation that trailed the delivery of the Indimis much celebrated fowry boxes.

An eyewitness revealed that trouble started that day, Nov 18, during the introduction ceremony,w hen one half of the cantankerous twins, Ameena , Yakata, insisted on recording the event with her mobile phone, when she was told it is against protocol to even go inside with her phone she decided to show her true nature as an ill mannered lady.

The source told us she also probably got carried away with the prospect of her family capturing yet another big fish,an act the Indimis are known for.In line with the Hausa/fulani tradition the boxed contained cash,jewelry,clothes,bags,shoes and other gifts valued at several millions of naira for Zahra and the first family.

A struggle reportedly ensued between Yataka and the villa’s security personnel who tried to make her comply with protocol only for her to resist, this we learnt attracted to attention of wife of Nassarawa state Governor, Mrs Al Makura who had to step in and in the process got injured. This incident really infuriated the president and his family and they were reported to have told the controversial, Indimis that they won’t hesitate to return the gifts and cancel the ceremony all together. We gartherd this was part of what necessitated the president’s wife to personally handle some of the events leading to the wedding like the photographs and write ups.”they never left anything to chance,hence this publicity craving indimi family would have ruined it” a source said.