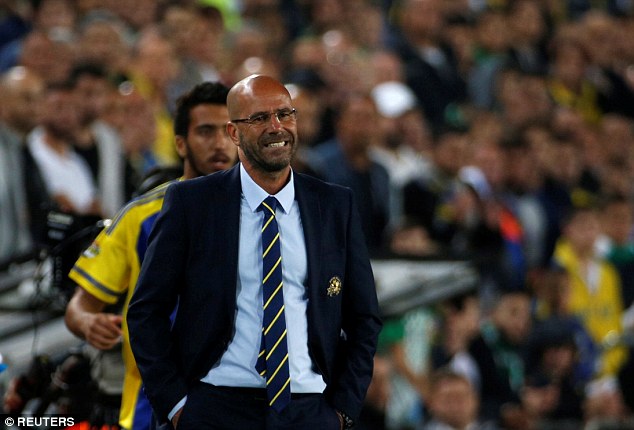 Ajax have confirmed Peter Bosz as their new manager after Frank de Boer stepped down from his role earlier this month.

Bosz, a former player and technical director at Ajax’s arch rival Feyenoord, is leaving Maccabi Tel Aviv to join the Amsterdam club on a three-year contract.

‘It’s a good time for me as a coach,’ said Bosz who led Maccabi to second place in the Israeli league.

‘I’m very ambitious and so are Ajax,’ added the former Dutch international midfielder, who played six seasons with Ajax’s rivals Feyenoord where he also held the post of technical director from 2006-2009.

Ajax finished second behind PSV Eindhoven in the top flight Eredivisie season that has just ended and will hope to regain their crown under Bosz – who only took charge of Maccabi in January.

Meanwhile De Boer has been backed to succeed in the Premier League, should he take the vacant top job at Everton, by his twin brother and former Barcelona team-mate Ronald.

De Boer is favourite to become the new Toffees boss after Roberto Martinez was sacked following a dismal run of results this season.

The 46-year-old Dutchman, who stepped down from his role at Ajax after securing four domestic titles during a six-year stint, has been strongly linked with a move to Goodison Park this summer.

Xhaka pictured at Arsenal training ground ahead of move