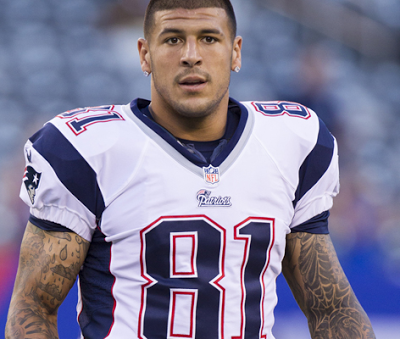 Former New England Patriots star, Aaron Hernandez who was convicted of killing his former friend, semi-pro football player, Odin Llyod, allegedly wrote a popular bible verse, ‘John 3:16’, which reads: ‘For God so loved the world that he gave his one and only son, that whoever believes in him shall not perish but have eternal life’, on his forehead, using a red marker pen before committing suicide in his Massachusetts jail cell.

He also allegedly left a Bible in his cell on to that verse, according to CBS Boston. The verse has been referred to as ‘The Gospel in a Nutshell’. Investigators are also said to be looking at the possibility that Hernandez smoked K2 synthetic marijuana before taking his own life

He was already serving a life sentence for the 2013 murder of Odin Lloyd, a semi-professional football player who was dating the sister of Hernandez’s finance.

Investigators say his fellow inmates allegedly told them that he was high on K2 – also known as ‘Spice’ – prior to his death.
That’s the same drug he was said to be smoking the night of Lloyd’s murder. The chemical composition of the drug has been linked to psychotic episodes, collapses and seizures among users.

The investigative team is also looking at a 22-year-old friend and fellow inmate of Hernandez’s who is believed to be the last person to see him alive. That particular inmate is now under suicide watch.

The fresh developments came after it was suggested Hernandez may have – inadvertently or intentionally – cleared his own name by committing suicide early this morning.  Under a long-standing state legal principle, courts customarily vacate the convictions of defendants who die before their appeals are heard.

There are also speculations that he killed himself so that the families of his victims can’t sue his estate. With him being dead, everything goes to his fiancé, Shayanna Jenkins-Hernandez and their daughter, Avielle Janelle Jenkins-Hernandez.

The former Patriot tight-end was found hanging with his own bed sheets at 3am Wednesday morning at the Souza-Baranowski Correctional Center in Shirley, Massachusetts, less than a week after he was acquitted of the 2012 murders of Eritrean immigrants who lived in Boston, Daniel de Abreu and Safiro Furtado.