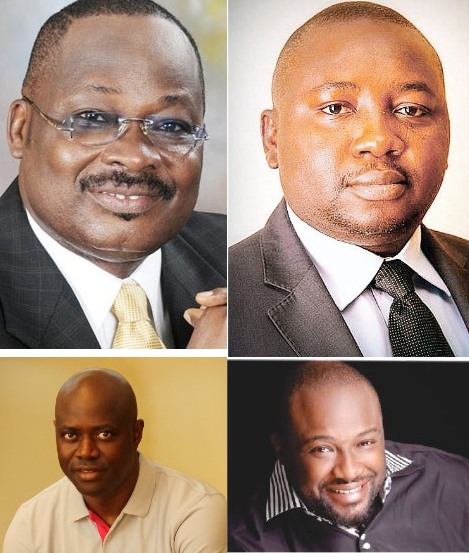 Oyo 2019: clockwise; Gov. Ajimobi, Bayo Adelabu, Seyi Makinde, Ayo KarimGov. Abiola Ajimobi of Oyo State will complete his second term in 2019. Some young professionals who are interested in occupying the Agodi House are warming up for the job and strategizing. While Ajimobi is said to have his choice/s for the exalted office, keen watchers of Oyo politics, measuring the level of preparations by the opposition parties in the state, conclude that the game in 2019 might turn out a surprising one.

Zaccheus Adelabu (40): an accountant and former Commissioner for Finance, Oyo State. He is a wealthy Ogbomosho man and known to be quite generous (something that seems to be peculiar with Ogbomosho people). Zaccheus is one of those privileged billionaires who climb up from very humble backgrounds and still keep a potent link with the facts and situations of their humble background. Having known the tragedy of poverty, he tries all he can to ensure that the number of those currently battling poverty is reduced to the minimum.

Seyi Makinde (50): though, he left the APC for PDP, political analysts say he is the man to beat, considering his expertise of dynamic politics, passion for charity and leadership qualities. An engineer and accomplished entrepreneur and philanthropist, Makinde is the youngest candidate in PDP. He is a humanitarian to the core and has been eyeing the post for a while. As it seems, he stands a good chance of becoming PDP flag bearer in a few months. Those who should know say the political party he belongs might not count against his luck in 2019.

Bimbo Adekanmbi (43): an accountant, former Deputy Chief of Staff and currently the Commissioner for Finance, Oyo State. He has not declared to run but gist around corridors of power informed that he is being considered as a suitable choice to succeed Ajimobi because of his impeccable record, brilliance, patience and outstanding achievements.

Bayo Adelabu (47): former First Bank CFO and Deputy Governor of CBN. A brilliant accountant, entrepreneur and philanthropist, he also has not made any public declaration but grapevine informed that he has interest to be governor and is a likely choice for endorsement by Gov. Ajimobi if he plays his cards right.

Akeem Agbaje, SAN: he is in his 40s. He is a legal practitioner and current NBA chairman in Ibadan. Although he has formally declared to run for office as an APC candidate, we haven’t heard much from him and he hasn’t made any other move to put himself out there since the declaration in December 2017.

Ayo Karim: in his 40s, Ayo is the young CEO of Costain West Africa. He has indicated interest to run for governorship but has not officially joined any party. He is most likely to join APC from all indications. Initially, Ayo’s elder brother, Kola Karim, was tipped to be the one interested in running for office but Ayo in December 2017 decided to come out in public to state his interest ahead of his brother.

2019: Okupe reveals what will happen to Tinubu if he fails in reconciling APC members