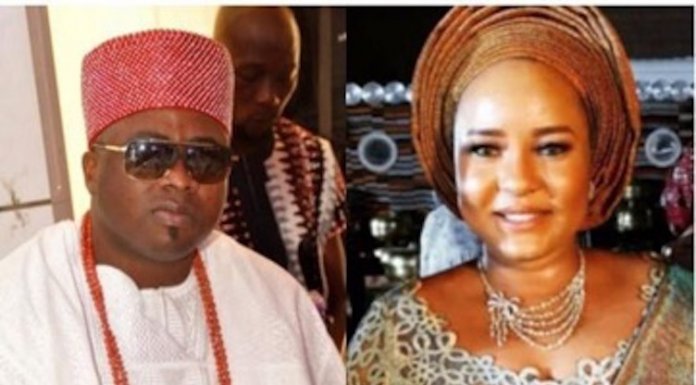 It is a general belief that most of Nigeria’s public figure and the rich in the country are fond of having amorous relationship with women, especially those that are well endowed with good qualities that attract the opposite sex.

Indeed, the immediate past governor of Ekiti State, Mr. Ayodele Fayose is not left out in this and his alleged sexcapades are said to be for the records.

Recent information revealed that the ‘loquacious’ governor once had e very intimate relationship with a sister of the new Olori of HRM Oba Saheed Elegushi III of Ikateland in Lagos, Hadizah and her name was given as Zainab Tanko Yakassai aka Miss Curves.

Zainab was allegedly involved with Fayose such that the relationship nearly led to the break-up of the former governor’s marriage until his wife cried to God and the alleged philandering lifestyle of the lady became open to the ex-governor.

Zainab is alleged to be very popular within the Northern part of the country as a lady about town, who moves with those that matter in the Federal Capital city of Nigeria, Abuja, and Kano in particular.

Zainab  is said to be a make-up artist and an event manager, and she is also a dermatologist by profession.

It was revealed that the lady had been married twice, firstly to a US-based businessman, and later to one former NFA scribe, whose name was withheld.

The relationship between the beautiful lady and Ayo Fayose allegedly went sour and ended when Zainab claimed to be pregnant for the then number one citizen of the Fountain of Knowledge state, which got her into trouble.

We gathered that the love story between Zainab and Fayose was known to virtually all those that were close and mattered to the ex-governor.

“Zainab was so popular in Ekiti then and frequently visited Dubai, which was more like their second nest.

“She was well-accepted by Fayose’s mother then to the extent that everybody was of the belief that she will be the substantive First Lady of Ekiti State, on account of her aura and aristocratic pedigree but the bubble burst when gangling Fayose discovered to his dismay, she had serially been having amorous affairs with some top shots, prominent among whom, is Tomi Frank from Balyesa,” sources said.

It was revealed that Zainab carried her sister, Olori Hadizah along in the ‘project’ as they allgedly used to visit Ekiti State together in those days such that Fayose’s marriage was allegedly seriously threatened until bubble burst and that it miraculously took the vigorous prayers of Fayose’s wife, Feyi, before Zainab left her husband alone.

It was however, a surprise to many people that Oba Saheed Elegushi could pick someone from such a family as Olori, but as someone said “does it really matter, after all it was Zainab, her sister that was indicted in the sexcapade, her sister, Hadizah is a virtuous lady with good background and she has changed the life of the king for the better since they became lovers.”