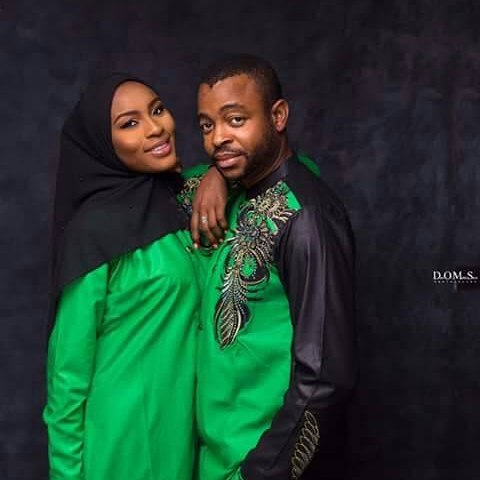 Mansurah Isah, a former Kannywood actress said that one of the reasons marriages fail is because women check their husbands’ phones, adding that sometimes she has “to be blind, deaf and dumb to survive her marriage”

Mansurah, who is married to top  Kannywood actor,  Sani Danja, stated this in an interview with Daily Trust.

When asked about her transition to charity services, She said

Like you know, I have encountered a lot of controversies and have been through a lot in life. I’m sorry to say this but, in the northern part of Nigeria, when a woman gets married things become a lot different for her. She no longer gets some of the things she desires and deserves. This has a lot to do with our culture and religion. When culture does not stop you, religion will stop you and what religion does not stop you from, culture will stop you. So these are some of the challenges women are facing in the north.

However, for you to be able to make it after marriage, you have to fight a lot of obstacles, you have to work hard, for you to be able to get what you really want and Alhamdullila, I’ve gotten what I want. I fought for myself, my life and future in order to come back because even in my family, there was a lot of crises. I was told ‘you won’t do this; you are a married woman now’. It is apparent that there is no way a man can take care of a woman 100 percent. There are some things you cannot tell the man you really want because you feel shy of demanding for them.

There are times when a man may be broke and not able to fend for his family but if the woman is working, she will raise him. These are the kind of things I want our people to think about when they want to stop the married woman from working, especially when that work is not haram in the religious setting.

I was affected because wherever I went for a job or applied for one, and another girl who is not married goes for the same job, definitely I will not get that job, even when they know that I am more qualified and can deliver better, simply because I am married.

Asked if she succeeded in her business because her husband supported her, She said

I know I succeeded because he supported me, and he too has been having challenges because people tell him that he is ‘mijin tace’ because of the way he is supporting me by giving me the liberty to live my life.
Before he married me, he knew the kind of person I am. He knew how hard working I am, how I tried to make ends meet because I am not the kind of person that will fold my hands and wait for him to do everything for me and our children.
And thank God Alhamdullilah, one of the reasons why my husband is supporting me totally is what happened when he had an accident in which he broke his two legs and arms. That episode really changed his perception because we suffered a lot then. All the money we gathered was used for surgery to make him walk again.

From that moment, my husband realized the importance of a man allowing his wife to work because that time I used to go to Dubai to buy kitchen equipment and bring them to Abuja to sell. The money really helped us a lot and when my husband got back on his feet, he told me ‘Mansurah, I wouldn’t want you to sit down at home. You can go out and work but anything our religion does not allow you to do, please don’t do it. I give you 100 percent support’.
I know it’s not every man that can do this, so I thank him all the time and he knows that allowing me to work gives him a lot of freedom. This is the kind of thing that makes our marriage work. This is what makes us the best couple in the north.

When asked the secret to her 11-year-old marriage Mansurah said:

The nickname people call my husband is mai buhu buhu loosely translated as somebody that has plenty women. Being married to Sani Danja is not a day’s job and it is not easy at all. Sometimes, I have to be blind, deaf and dumb to survive in this marriage.
He is a star, and apart from that he is handsome and rich. These are the qualities a lot of women want in a man. A lot of girls beg to date him.
I was able to build a lot of patience to understand the kind of man I married. I married a celebrity because I was also a celebrity and sometimes fans can make crazy remarks of you.
What do you expect from a man whose religion permits to marry four wives? One of the key things that make our marriage stand is that I have never in my life gone through his phones.
You know, the act of women checking their husband’s phones is one of the main reasons why marriages collapse. When a woman checks her husband’s phone and sees something she’s not supposed to see, it will really affect her, and by extension the marriage. But when you stay away from your husband’s phone, his laptop and some personal stuff, you will have a very peaceful marriage. I think those are the kind of things that has made our marriage last.