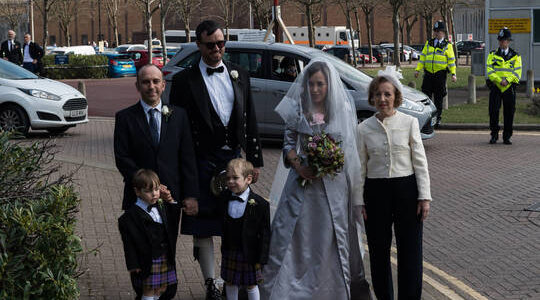 The couple have two children.

The imprisoned WikiLeaks co-founder is fighting attempts to extradite him to the US on espionage charges over publishing Iraq and Afghanistan war documents more than a decade ago.

Moris was photographed outside the prison with the two sons she had with Assange – Gabriel and Max.

“I am convinced that they fear that people will see Julian as a human being. Not a name, but a person,” Moris said in an article published by The Guardian on Wednesday.

Assange is being held in the maximum-security prison pending the decision on his extradition to the US, where he faces up to 175 years behind bars for allegedly conspiring to hack Pentagon computers. The hacking charges are based on discredited testimony of a convicted Icelandic criminal, and the US has not offered any tangible guarantees Assange will not be held in solitary or tortured, but the UK has so far denied his appeals.

The US has been after Assange since 2010, when WikiLeaks published a trove of State Department cables as well as Pentagon documents about the wars in Afghanistan and Iraq. The documents were provided by US Army intelligence analyst Chelsea Manning, who was convicted under the Espionage Act and spent years in prison.

In 2012, Assange sought asylum in Ecuador, fearing – correctly, as it turned out – that allegations of sexual impropriety in Sweden were a pretext to have him sent to the US. He spent seven years trapped inside Ecuador’s embassy in London, with the UK denying him permission to leave, until his asylum was revoked by a new government in Quito. In April 2019, Assange was dragged out of the embassy by British police to face charges the US quickly made public. He has been imprisoned in Belmarsh ever since.

Moris met Assange in 2011, and began a relationship with him in 2015. She described him as “a wonderful man, intelligent and funny, [with] a deep-seated sense of right and wrong,” and said that the wedding is “a declaration of love and resilience in spite of the prison walls.”

“Their torment only makes our love grow stronger,” she said.

Assange has denied all accusations of espionage. His lawyers have argued that WikiLeaks engaged in journalistic conduct perfectly legal in the US – which did not have jurisdiction over him or the outlet in any case. His fate is now in the hands of the UK Home Office.

LOVE AND TRUST: How Far Is Too Far……