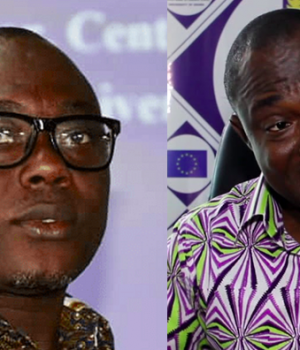 Two Ghanaian university lecturers have been suspended without pay after a BBC investigation reported they had sexually harassed undercover reporters posing as students.

The University of Ghana suspended Ransford Gyampo for six months and Paul Butakor for four months. Both deny the allegations made last year in BBC Africa Eye’s sex-for-grades documentary.

A Nigerian lecturer was also suspended after it was broadcast in October.

The academics were secretly filmed as part of a year-long investigation. BBC journalists posed as prospective students to expose sexual harassment and misconduct at both the University of Ghana and the University of Lagos.

In the aftermath of the film – which sparked widespread social media outrage in Ghana and Nigeria – the University of Ghana lecturers were suspended on full salary pending an internal investigation.

The lecturers would undergo training about the university’s sexual harassment and misconduct policy and would resume work only after a positive assessment, their statement said.

The pair would also continue to undergo annual assessments for the next five years, the committee added.

The reaction to the lecturers’ suspension has been mixed, reports the BBC’s Thomas Naadi from the capital, Accra.

Some believe the punishment is too lenient whilst others think that it is stiff enough to deter others from similar behaviour in future, he says.

On Monday, Nigeria’s Senate began debating a bill, initiated after the BBC Africa Eye investigation, that aims to prevent the sexual harassment of university students.