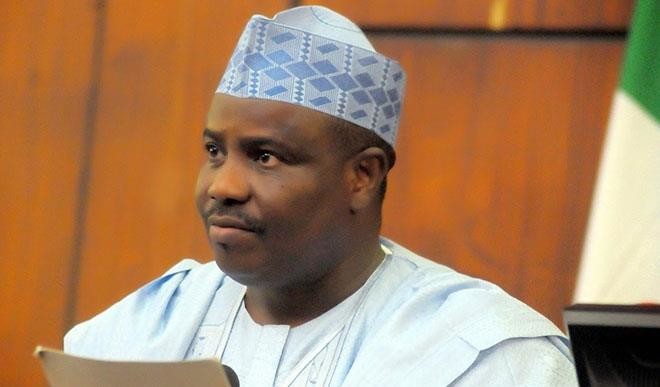 The former House of Reps Speaker announced that he had returned to the People’s Democratic Party (PDP).

The development is the climax of Tambuwal’s face-off with his political godfather and former Governor, Senator Aliyu Wamakko.

In his speech, Tambuwal explained why he took the decision.

“Politicians and political leaders, groups and group leaders, stakeholders in the development of our state and our nation, fellow indigenes of Sokoto State and citizens of our great country, members of the press, ladies and gentlemen. It is with gratitude to Almighty Allah, our Sustainer that I address you on a matter of great importance to our nation at this auspicious moment in our political history. I stand before you with a heavy heart, wishing I had cheery words of progress, instead of the sad report that I am constrained to give you on the situation of our dear nation.

The struggle for democracy is one that began with our fight for independence as a sovereign nation. To this end, the blood, freedom and other liberties of our past heroes and contemporary veterans were sacrificed. The current dispensation began in 1999, as the watershed of our toil, which granted to us a democratic system that is striving to evolve and survive.

Through those years the forces of genuine change gravitated and by 2015, merged to ensure a transition of power that Nigerians hoped would herald a new order of true democracy under an atmosphere of justice, peace, equity and the rule of law. The leaders of that coalition represented and symbolized the aspiration of Nigerians for progress and prosperity under one united, indivisible nation.

As the speaker of the House of Representatives then, I left my comfort zone to be involved in the struggle for the enthronement of purposeful leadership for the citizens of our dear country.

Now, almost four years into what ought to be a new order as desired and elected by Nigerians, the nation is unfortunately going through the most difficult and precarious times, since the Civil war; with ethno, religious and regional distrust at its highest ebb.

This development had often been blamed on political opponents. Meanwhile, there are issues of brazen inequity and capacity and questionable distribution of appointments/projects. This is in addition to lack of statesmanship in responding to national issues, among other things that are for aggravating the anomaly.

In line with the best traditions in any major political decision, especially by a serving elected Governor, I have painstakingly consulted far and wide, on whether the present political platform is a viable vehicle for achieving the aspiration of our people.

It is because I am convinced that no nation can thrive while there is inequity and bad governance; because I am saddened by the fact that lethargy, incompetence and sustained denial of obvious leadership missteps have become the major raw materials with which the Nigerian State is being run today; because I am unwilling to be part of frightful conspiracy against the cohesion of the Nigerian State, Nigerian youths and peoples; because I am unable to feel at ease in the face of a progressively divided nation and, above all, because I am totally unable to reconcile myself to a national leadership that offers no redeeming moral beacons that I am here with you today; to announce withdrawal of my membership of the All Progressives Congress and return to the People’s Democratic Party.

I speak to you today with a mixture of sadness and relief because I did not expect that the APC, which promised so much when the People’s Democratic party (PDP) stood under the sway of impunity, could not maintain or manage whatever good it inherited. It has also not broken new grounds in any positive sense but has instead reached historically unprecedented heights of impunity in all manner of vices far above and beyond the challenges which made some of us to leave the PDP about four years ago to join others to form the APC. The party has brazenly turned itself into a sanctuary for the corrupt and a machine for rigging and for the rape of democracy.

Let me also put it on record that all attempts to discuss the electoral promises of the APC-led government, including the restructuring of the country as promised Nigerians and as contained in the APC manifesto, have proved abortive.

Beyond that, I cannot look those who elected me as their Governor here in Sokoto State in the face and boldly point to any meaningful Federal Projects initiated in the state under the APC government. Even the bulk of uncompleted Federal Projects here that were inherited from the previous administration have largely remained in their state of neglect. Sokoto State is also not being meaningfully carried along in political appointments and in other matters of national importance.

Like most states of the North, and indeed the entire federation, elders and traditional institutions have come under measured disrespect. The recent attack in Tabinnii in Rabah LGA of Sokoto State, the routine invasion of Zamfara State by armed bandits, the now-regular killing of policemen by unknown gunmen all over the country, the regular massacre of innocent people in the North East axis and many similar daily incidents, do not attract much attention any more.

Good governance, viz-a-viz economic wellbeing of our people, remains the major reason for my action of today. Information from the National Bureau of Statistics (NBS) shows that over nine million jobs have been lost in the last 3 years, since the APC Government came into office. While youth unemployment rate was 11.70 per cent during the fourth quarter of 2014, it rose to 33.10 per cent in third quarter of 2017 under the APC Government. The economy is not showing any real signs of improvement. Our educational and health institutions are in retreat. Poverty is on rampage and still ravages the land. It is unacceptable that majority of those who voted for APC in 2015 should have nothing good to show for it.

As in the past, it is only my interest in equity, the wellbeing of Nigerians and a befitting future for our teeming youths, national unity and economic prosperity that has led to my new locus in Nigerian politics today. We all have a duty to do our best, while nudging our political parties to progressively align political contests in Nigeria along clear ideological lines; such that sooner rather than later the aspirations and the will of our people will be the only determinant of election outcomes.

Let me at this juncture state emphatically that I return to the PDP with a clear conscience today, because the party has learnt some bitter lessons and noted what mistakes it must avoid in the future. It is now a repositioned and forward-looking political party to which I now pledge loyalty, in my resolve to contribute towards improving the lives of Nigerians and expanding opportunities for the youths. It is only by working together as agents of development that we can promote excellence, competence, good governance and enthronement of genuine democracy to save Nigeria.

I thank you for your understanding, support, prayers and your continued faith in the Nigerian Project. May Almighty Allah guide and protect us.”

Olumakaiye Takes Over From Ademowo As Anglican Bishop of Lagos