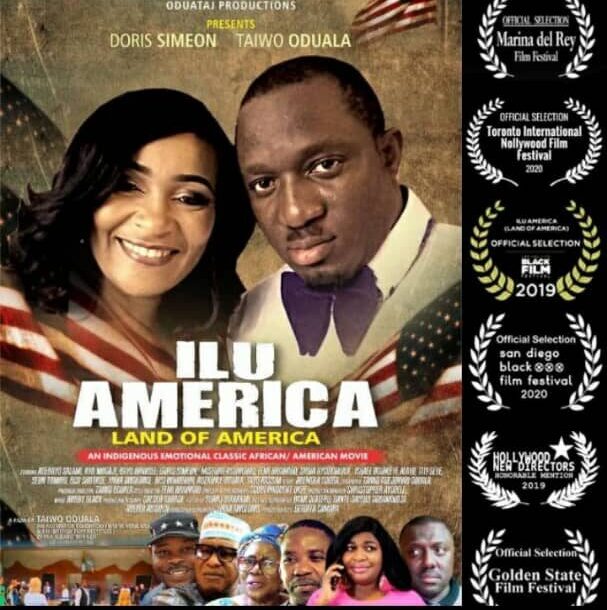 Nigeria born actor, movie producer, and director, Taiwo Oduala, a Nollywood legend with many movies and awards to his credit is the producer of “Ilu America,” (Land Of America).

The veteran actor has shot innumerable films round the world, he is the maker of the first indigenous African Language movie to be shot and premiered on big screen.

“Ilu America,” a movie that made history when it was premiered in Colorado in 2019, is currently making waves all over the world.

The ground-breaking “Ilu America” is a reality story of ordeals and survival of immigrants in foreign land, and it was shot in Hollywood, Los Angeles, California.

“Ilu America” is a movie that makes viewers understand life and culture from various ways of ethnicity and Learning life proper in various part of the world.

In the film, the character of Ade talks about a well to do young man who went in search of greener pastures from Nigeria To America.

Unfortunately, things began to go wrong upon his arrival in America.

His thoughts betrayed him as a result of his misinformed intention and everything went wrong as all efforts were futile.

He was left with no other option apart from facing the ordeal of life as he struggles for survival, and hoping for better future, as nature had to decide his fate.

“Ilu America” is a Yoruba Language movie filled with suspense, intrigues, emotions, love and action, and the movie is fully Subtitled in English.

Oritsefemi’s Wife Hospitalised After Musician Beats Her! How Caroline Danjuma Exposed Him