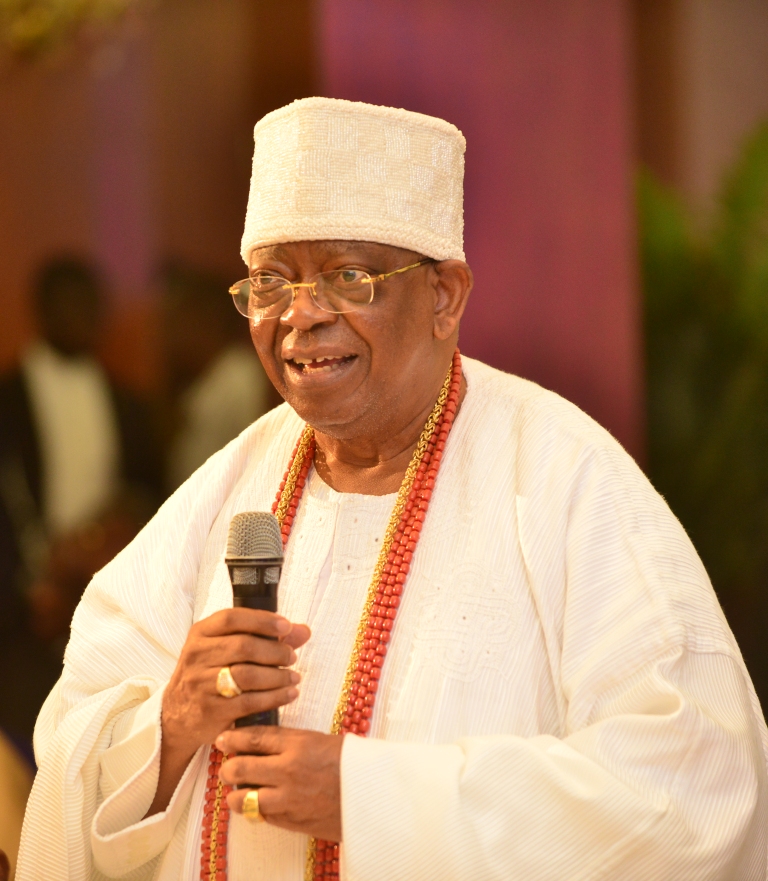 It is difficult, if not out-rightly impossible to read the story of his life and not be eminently inspired. This is for the simple reason that each chapter of that life leaves sundry lessons. It is all about the impact, visionary commitment to courses, transparent honesty in dealings with others, as well as diligent pursuit of purpose, human limitations notwithstanding.

In fact, say it that Otunba Michael Olasubomi Balogun (CON), the man they call the Asiwaju of Ijebu Christians, is a lesson to life, and you would be stating the obvious. From the perspective of entrepreneurship, he is a front-liner, visionary leadership, he is there; manager of men and materials, he has a tall reputation; a philanthropist of note the same way he is an outstanding bridge builder. 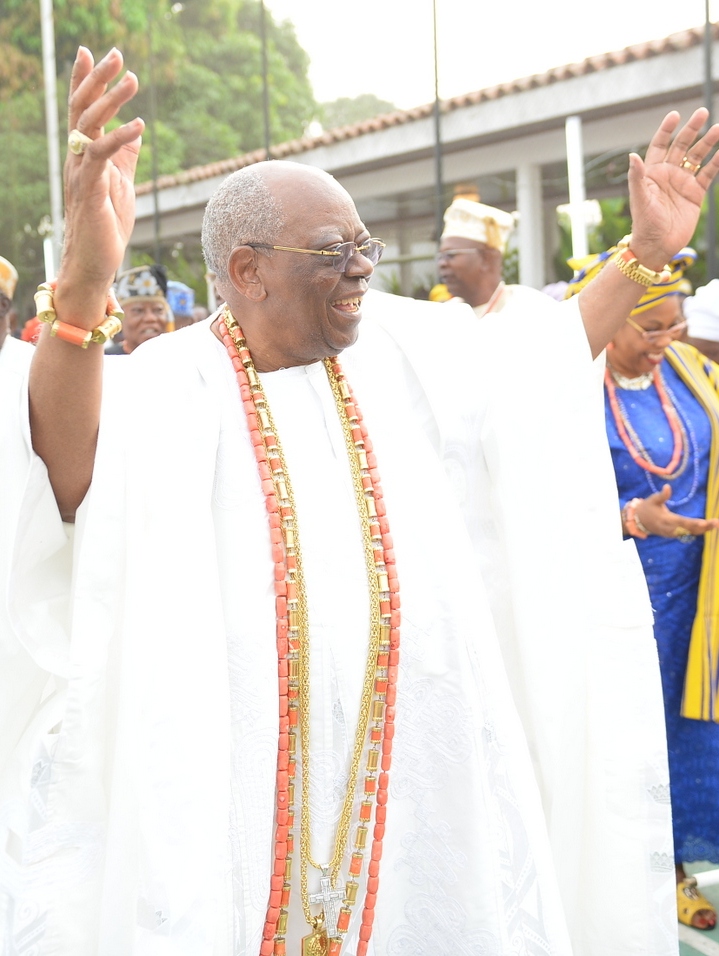 For example, it was his great entrepreneurial foresight that saw to the birthing of one of Nigeria’s leading financial institutions, FCMB, at a time of seeming impossibility. An individual seeking and obtaining a banking license was unheard of at the time, but Balogun did not allow popular sentiments to smoulder his tall ambitions.

He envisioned, he prayed, but he also undertook shuttle diplomacy when it mattered, cried when the need arose and equally appealed where it was necessary. The point really, is that he has learnt to give to life, whatever is genuinely necessary to achieving the desired results.

Born on that auspicious 9th day of March in 1934, Otunba Balogun’s citation is like a scroll out of the hall of fame, gripping and intriguing no matter from which perspective it is told. Yet, it would remain incomplete without a reference to a few number of Nigerians who stood in support of this visionary’s mission to accomplish his ambition. In every interview, comment or discussion the Otunba Tunwase, who is also the Asiwaju Onigbagbo of Ijebuland, Dr Michael Olasubomi Balogun will always appreciate such people, eternally remaining grateful, sheer humility, virtue, rarely found in men of such exceptional worth. 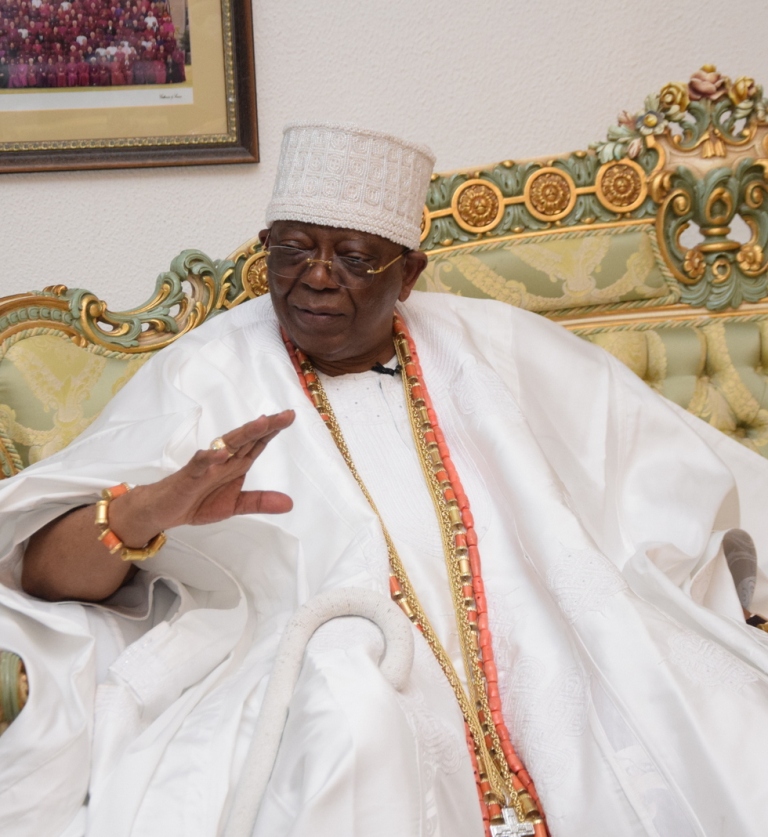 At 84 therefore, Otunba Balogun is a portrait of very many treasured virtues. He epitomises principled living, genuine love, detribalisation, and the eloquent apostolic dictum that one good turn deserves another. His bridge-building antecedents are well known, and has lent tremendously to the quest for inter-ethnic cohesion in the country yet, Otunba Balogun’s life-story shows that nothing could be impossible to anyone who believes and that there is light on the lips of a nine-year toddler.

When frustrations came over obtaining needed resources from then existing banks, it had taken a seemingly innocuous rebuke from his nine year old to awaken his faith. The boy had innocently observed whether his father could not establish his own bank, if the one he had worked for denied him what ordinarily, should be his. That was the kick he needed to jumpstart a bank of his own. Today that modest idea has grown to a mighty oak, sheltering hundreds of thousands of people, covering the interests, needs and care for millions of people, offering direct employment and making available to them, resources to multiply their incomes and keep families running.

Ever so grateful to God for what his life has become, Otunba Balogun is humbled by the realisation that he is neither the biggest nor the smartest, yet, swims in a rich measure of divine grace. This is the reason behind his unwavering philanthropic gestures. He cites his ascendency to the stool of Asiwaju of Ijebu as example, affirming that this was given even when his mother was the Iyasuna of Muslims in Ijebu. According to him, “it is God who has been doing this that I was also made the Asiwaju of Ijebu Christians So, it is in appreciation of what God has done for me and so I have thrown myself into the service of the people. I am always joyous to do good and to have people around me. And the good Lord has always been faithful to me”.

Having been accepted across philosophical, political and religious divides, he has thus far operated as a bridge builder of sorts, deploying resources as regularly as required. In fact, in the area of development of the town, he has played a sterling role, falling back on his being picked by the leadership of the Christian Association of Nigeria in Ijebu land and requested to rally round others to develop his people and the community. 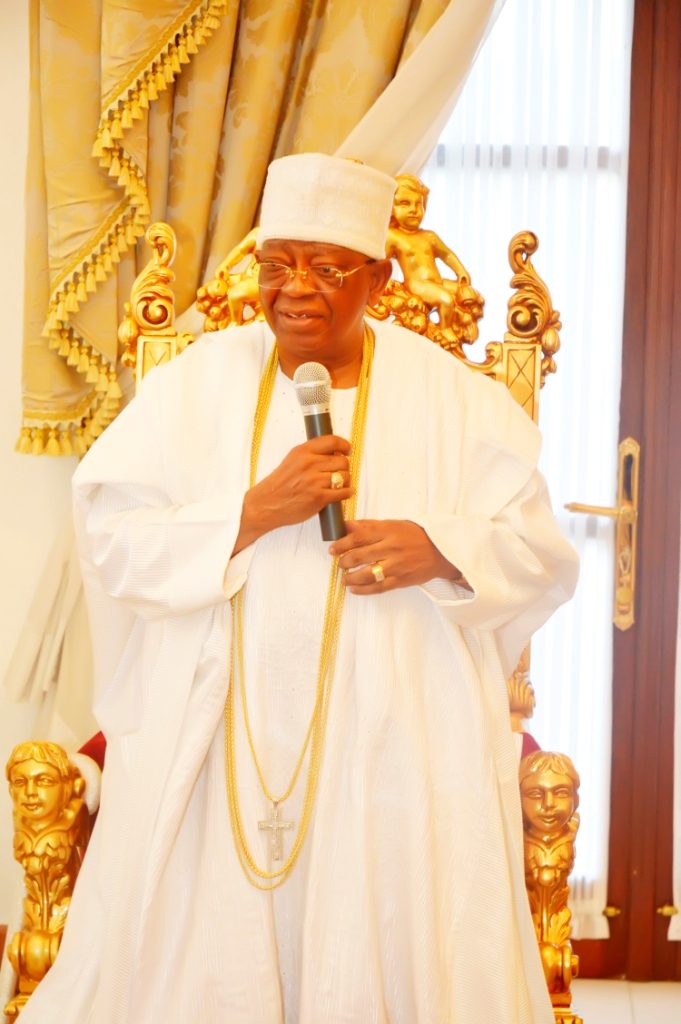 A few years ago, he transferred the Otunba Tunwase Paediatric centre to the University of Ibadan, a project in which he had sunk billions of naira. That handover was on the auspices of his 80th birthday. On the spiritual plane, he is not just satisfied with the tag of Asiwaju of Ijebu Christians but is thrilled by initiatives that advance the course of Christianity. Part of this are the Annual Christmas Carols in December and Prayer sessions and Thanksgiving Services in January in his country home of which he is a convener.  Reflecting on the prayer sessions recently, he observed: “The tradition I met when I took over from the first Asiwaju of Ijebu Christians was that annually Christians and even Muslims would kick-start the new year by going to offer prayers in the house of the Awujale and after that they would come to the house of the Asiwaju. The significance is to give an opportunity for the Asiwaju to join everybody in thanking the Almighty God for what He has done for all of us in the year before and asking him to continue to guard and take care of us for the new year. I think that its significance is not just for Christians but for all people. The Yorubas say if you give thanks for the favour done in the past that you will receive more favours”. These sessions have grown in popularity with attendant extensive positive impact.

In fact, his reference to God is so well known around the town that it has become the tradition of local musicians to start playing the tune “Nipa ife Olugbala ki yo si nkankan”, (which means by the love of the Saviour, there shall be no evil) anytime and anywhere he makes his appearance. For the Baba Oba of Ijebu-Ife, it is the good Lord that has been protecting and guarding His people and it is only natural to sing back in appreciation.

“I genuinely worship my God. In every home of mine, I have a chapel and on my birthday, I go there first to thank God for mercy received and to pray for further mercy. The secret of it is that I throw myself into the hands of God trusting that He will do the best for me”, he says. Otunba Balogun may not be so much swayed by the tag of a politician as he appreciates the appellation of philanthropist. He is a living proof that it is in giving that one secures the channel of receiving.  And that for Nigeria to remain, there has to be prayers.

“The first thing I will say to Nigerians is to be conscientious in praying and having faith that having prayed, the good Lord will answer our prayers. There is a lot that Nigerians expect from the country but my prayer is that the good Lord will guard everybody including our government, so that everybody will do the right thing. Between friends, family and universally, we should put God first and seek His face and everything else will be right”, he admonishes.

A holder of the 1959 LLB Honours, of the London School of Economics (LSE), he was called to the English Bar in December 1959.  He was trained as a Parliamentary Counsel by the Government of Western Region of Nigeria at Whitehall and the British Parliament in London, and started his Civil Service career in February 1961 in the Ministry of Justice, Ibadan. He was later transferred to the Federal Ministry of Justice as the Assistant Parliamentary Counsel of the Federation, where he remained until July 1966. For nine years, between 1966 and 1975, he was the first Principal Counsel and Company Secretary to the Nigerian Industrial Development Bank (NIDB).  During this period, he received extensive training at the International Bank for Reconstruction and Development (IBRD), otherwise known as the World Bank, and its private sector affiliate, the International Finance Corporation (IFC) both in Washington DC.  He also received extensive training from leading stockbrokers, investment banks and merchant banks in London and New York. 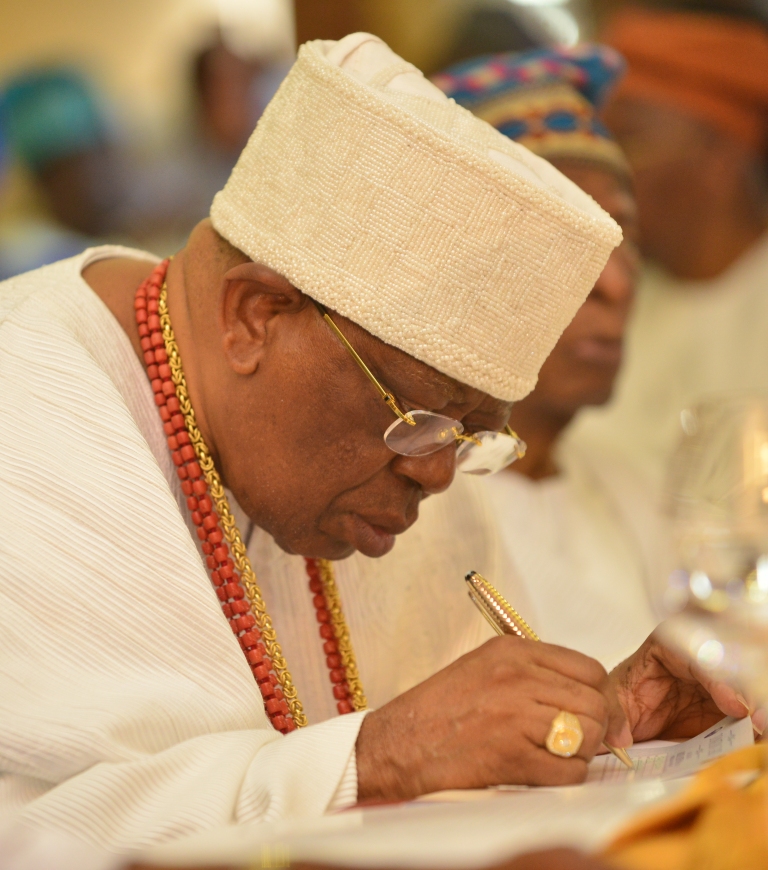 There were other outstanding moves within, but Otunba Balogun was seconded to Icon Limited (Merchant Bankers), as an Executive Director following its establishment.  During this time, he represented Icon on the Council of the Nigerian Stock Exchange (NSE) and he distinguished himself in the handling of many capital issues on the Exchange. He resigned in December 1977 to set up his own company, City Securities Limited, which became the first institution in Nigeria to combine Issuing House and Stockbroking businesses under one roof.  In less than two years of the establishment of City Securities Limited, he was cited as “a most distinguished and leading Baron of the Nigerian Capital Market”.

Otunba Balogun was the first in Nigeria as at 1987 to endow a Professorial Chair in a University, this at the University of Ibadan. He has equally donated to several altruistic causes in a number of institutions such as the Olabisi Onabanjo University (formerly Ogun State University), Yaba College of Technology, African Leadership Forum, etc. 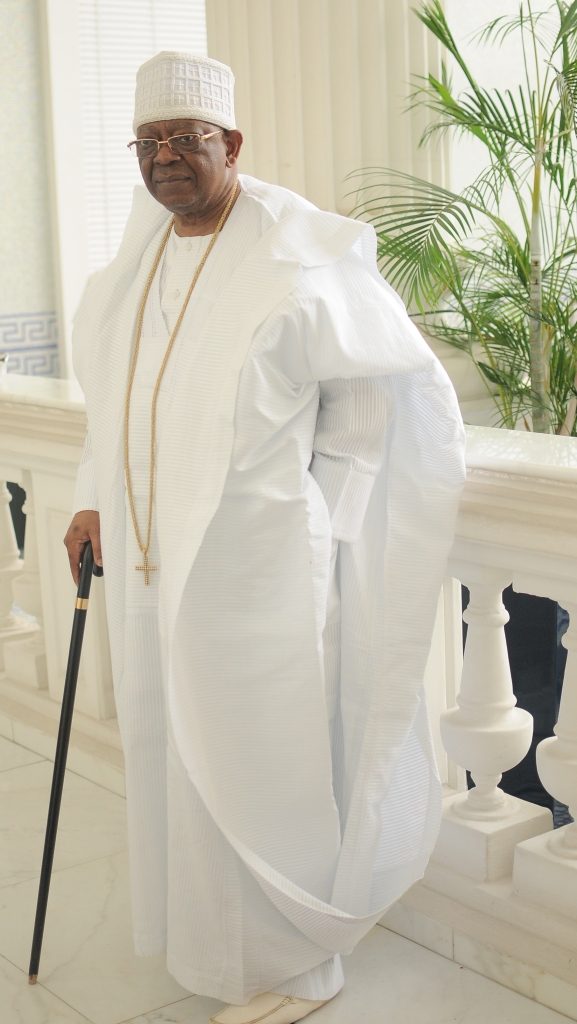 Otunba Balogun took over, reconstructed, refurbished and perpetually endowed the maintenance of The Children’s Emergency Unit in the University Teaching Hospital, Ibadan which has now been named after him, the “OTUNBA TUNWASE CHILDREN’S EMERGENCY UNIT”. He has donated to the Ijebu-Ode General Hospital a newly built and fully equipped air-conditioned 40-bed Children’s Centre, made provision for the perpetual maintenance of the Children’s Centre, and actively provided financial assistance to various local institutions, individuals and other charitable organisations.

To date, he has awarded over 300 scholarships to many Nigerians at secondary and tertiary levels; established an umbrella organization known as “Otunba Tunwase Foundation“ to cater for all his philanthropic endeavours and services to the community.  Under this Foundation, and on his 60th birthday, he commenced the construction of a special gift to the nation – the “OTUNBA TUNWASE NATIONAL PAEDIATRIC CENTRE.”  Otunba is a Fellow of the Nigerian Institute of Management, a holder of the Degree of Doctor of Laws (Honoris Causa) University of Ibadan and a Merit Award holder of several organisations.  In terms of traditional titles, he is the Baba Oba of Ijebu Ife and the Asiwaju of Ijebu Christians amongst others.

In November 2000, he was conferred with the National Honour of “Commander of the Order of the Niger” by the President and Commander in Chief of the Armed Forces of the Federal Republic of Nigeria. Otunba Balogun as an author, a prolific writer and a distinguished opinion leader was also at one time a member of the National Presidential Advisory Committee on the Recovery of the Nigerian economy.

He is a Fellow of the Chartered Institute of Stockbrokers,  the Nigerian Institute of Management, and the Chartered Institute of Bankers, a Former Deputy President now Life Vice President of the Nigerian British Chamber of Commerce,  Council Member of the Lagos Chamber of Commerce and Industry, Chairman, Primrose Investments Limited; Chairman, Bluechip Holdings Limited; Chairman, Swiftdrill (Nigeria) Limited, Chairman, Primrose Properties Investments Limited and Director of a number of other companies. 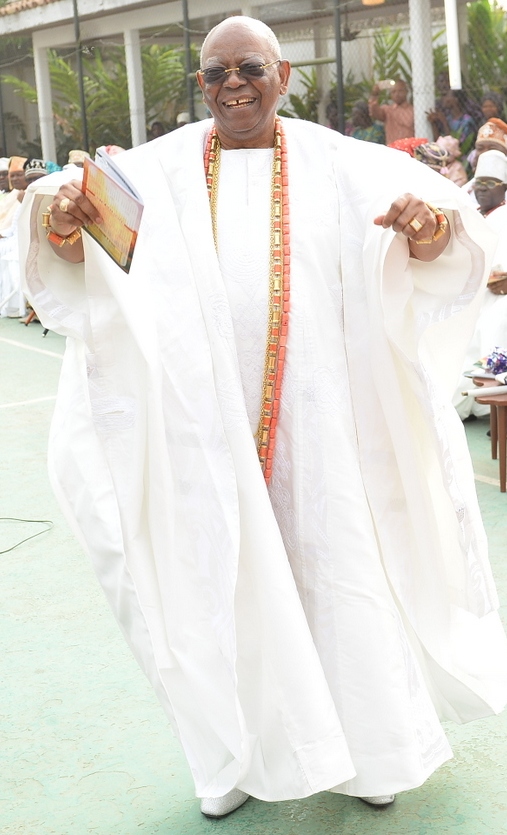