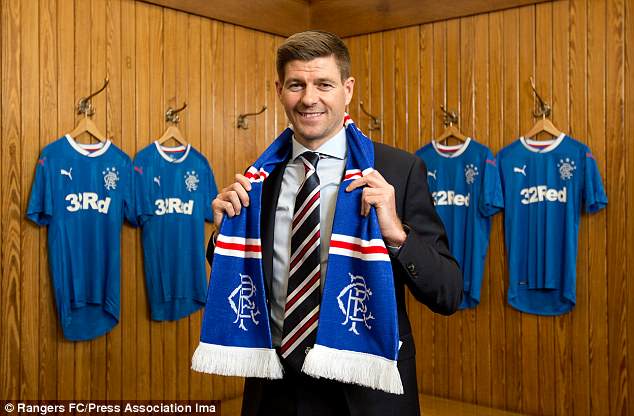 Steven Gerrard has taken up his first senior management role after being announced as the new boss at Scottish giants Rangers.

Talks between the Liverpool legend and the Glasgow club reached advanced stages on Thursday and he officially signed a four-year contract on Friday. That deal starts on June 1.

Rangers called a press conference for 3pm which prompted thousands of fans to gather outside Ibrox in the hope of being able to greet their new boss. One supporter brought with him an old England shirt with ‘Gerrard 4’ on the back.

Speaking at the press conference, Gerrard said: ‘I needed to weigh up a lot of things but a huge opportunity presented itself.

‘It’s a huge club and when the call came it was a no-brainer. I got a feeling in my stomach. It was a special feeling. I knew Rangers were for me.’

Gerrard, who will succeed former interim boss Graeme Murty after he was relieved of his duties in midweek, confirmed that former team-mate Gary McAllister will join him at Ibrox.

He explained: ‘I can tell you who my No 2’s going to be. Well, my assistant — I don’t like to call him my No 2 because he’s just as important as me and that will be Gary McAllister.

‘He’s a long-time friend of mine. I played alongside Gary at Liverpool, kept in touch with him since then. I have huge respect for Gary and he ticks the boxes.

‘Maybe I’m not the most experienced manager sitting here right now but Gary’s been around the game for a very ling time so, as a partnership, I feel that’s very strong and he’ll be a big rock and a big support for me.

‘He’s very excited to take this. As soon as I asked him it was a “yes” straight away.’

Addressing questions about his lack of experience, 37-year-old Gerrard responded: ‘It’s not an issue for me.

‘I can’t do anything about not having experience. There’s only one way to get it.’

He later added: ‘I have weighed up the risks but can I do a job for Rangers? In my mind, yes.’

After witnessing the hoards of fans who had assembled to greet his arrival, Gerrard addressed his new public.

‘I want to give the supporters something to believe in. I am confident of delivering on the expectations. If I didn’t have that I wouldn’t be sitting here. In terms of targets, I just want to win football matches.’

Liverpool boss Jurgen Klopp reacted to the news just minutes after it was announced, speaking to the Liverpool website.

The German never managed Gerrard, but the pair have worked together at Anfield this season after the club legend took up a role in the academy.

‘How I know it, Rangers are a big club in a little bit of a difficult moment still but a much better moment than a few years ago. It could be a really good fit, it could be nice, coming closer to Celtic.

‘Stevie is one of the best midfielders ever. Now he wants to be a manager. He has the passion for football and the knowledge about football. All the rest is to learn; I’m sure he learned a lot in the last year.

‘I’m really happy for him to have the opportunity.’

Rangers are bidding to get back to the summit of Scottish football, and could still finish second this season behind champions Celtic.

The Gers host Kilmarnock on Saturday, before travelling to Aberdeen for a crunch contest at Pittodrie on Tuesday, May 8.