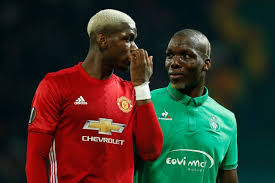 Florentin Pogba, the older brother of Manchester United star Paul, was attacked by angry Genclerbirligi team-mates after abruptly walking off the pitch on Sunday and leaving his side a man down, Turkish media reported.

Pogba was confronted in the changing room by several team-mates after the 1-0 league defeat at home to Antalyaspor, according to the Dogan news agency and Fanatik sports daily.

Security officers and club officials reportedly had to intervene to usher Pogba to safety.

The defender removed his shirt and stormed off the pitch in the 88th minute with his team down a goal after an argument with a team-mate.

Genclerbirligi had already made their three substitutions, forcing the home side to finish the match with just 10 men.

The loss means Genclerbirligi are almost certain to be relegated from the Turkish top flight with five points between them and safety and just two matches of the season remaining.

Pogba, 27, signed an 18-month contract with the Ankara-based club in January after spending most of his career at Saint-Etienne.