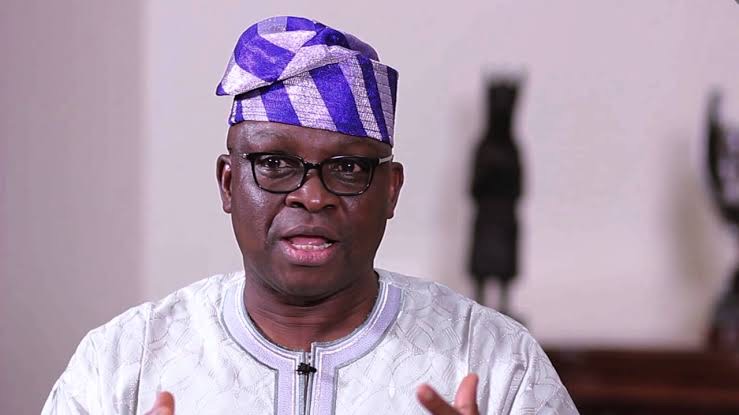 A Chieftain of the PDP in Oyo State, Dare Adeleke has faulted Fayose’s claim that the governor of Oyo State and leader of the PDP in the South West Zone, Engr Seyi Makinde, may influence the venue of the on-coming PDP Congress in the zone.

Adeleke who is also Chairman of the Oyo Pacesetters Transport Company said “Fayose’s tantrums are unfounded and accused the ex-Governor of Ekiti State of behaving like a “spoiled brat”.
Adeleke stated that it is “Fayose who had been crying foul and running when no one pursued him”.
Laying the facts bare, he said: ” At a meeting held in our headquarters at Wadata Plaza, Abuja, the National Working Committee, NWC, decided on rescheduling the congresses in three states as earlier dates had been disrupted by the COVID-19 lockdown last year.
The congresses were scheduled to hold simultaneously in Ibadan, Kaduna and Makurdi on April 10, 2021.
Present at the Abuja meeting which held on April 7, were the National Chairman of the PDP, Uche Secondus, the party’s Deputy National Chairman, the National Secretary, Senator Ahmed Tsauri and Bukola Saraki led Reconciliation and Strategy Committee, who met with the both parties.

In his usual rabble rousing manner, Ayo Fayose kicked against Ibadan as venue of the South Side West Congress and attempted to influence the venue to be shifted to Abeokuta sighting all sorts of reasons which included his personal security.
As much as His Excellency, Engr Seyi Makinde assured everyone of their safety, Ayo Fayose wanted only his voice heard.
Makinde, being the man of peace he is, suggested Lagos, yet Fayose ranted saying he also would not be safe in Lagos.
For peace to reign, a senior member from the north then suggested Oshogbo which is the home of ex-Governor Olagunsoye Oyinlola who is also Chairman of the Southwest reconciliation committee and Oshogbo was adopted.
At no time did Governor Makinde influence nor force the emergence of Oshogbo as venue for the Congress. Aa a matter of fact, Gov Makinde magnanimously conceded to NWC, despite Ibadan being the capital of the zone.
It was indeed, Ayo Fayose who is now catching imaginary witches that ironically influenced the choice of Oshogbo as venue.
It is therefore disgusting to watch Fayose shouting again in the press about venue of the event.
It is rather unfortunate that the South West PDP has the misfortune of having such a trouble maker and spoiler as Fayose in our midst.
His case is now becoming like the fabled Sour Grapes. Spoil it all, give it a bad name, just because your hand cannot reach it.
Fayose had thought that polarising the party and attempting to disrupt our activities and the Congress, would work in his favour. However, it is becoming more glaring to him that his plans have failed and himself and his cohorts will have to face the day of reckoning.
Dazed out of his wits, Fayose is shouting like a wounded jackal, surely, he will be disgraced.

I have it on good authority that the same Fayose is recruiting thugs to disrupt the peace of the congress…this time, I can assure him that he has bitten more than he can chew. We are waiting for him and his band of worthless fellow.”