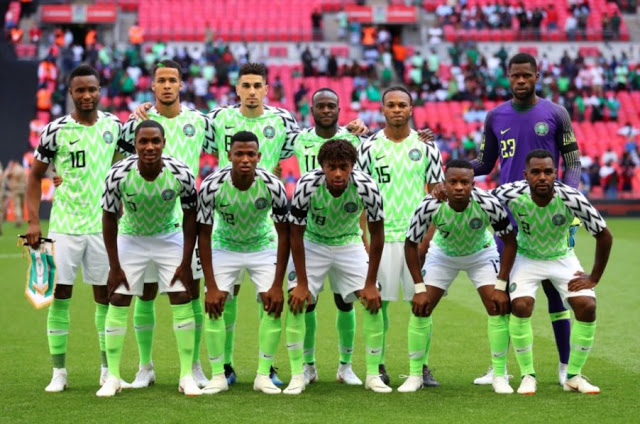 Senate President Bukola Saraki has expressed optimism that the Super Eagles will produce a performance to match their “sleek” jersey in upcoming World Cup games.

The Nigerian World Cup kit has earned praise for its snazzy and retro look, however, the team failed to create any spark when they faced Croatia on Sunday.

Speaking at the Russian parliament on Wednesday, Saraki said it would be difficult for Nigeria not to be noticed at the ongoing tournament.

“In sports, well, please allow me to say humbly, that it will be difficult to take your eyes off Nigeria during the ongoing World Cup tournament. If anything, we have already won the battle of the football jerseys; the Super Eagles kit is an instant classic, a coveted collector’s item, universally acclaimed as the best national kit in Russia 2018,” the senate president said.

“Naturally, the entire Nigerian nation is behind our team, optimistic for a sterling performance in the rest of the tournament and confident that our boys will now produce the sleek moves to match the sleek looks.”

Saraki said there is a need for Russia and Nigeria to work closely to tackle issues such as terrorism and human trafficking.

“There are many other issues that call for closer cooperation between our two countries – which contribute to sustainable peace in the larger world – and these include terrorism and human trafficking,” he said.

“For one, Russia is currently one of the destinations where young Nigerians are trafficked for sexual aexploitation. This is a worrying phenomenon for both our countries, and we should develop common strategies for tackling the problem. We look to Russia to join us in building stronger collaboration for the fight against this common enemy.

“Terrorism, most significantly in the shape of the Boko Haram sect, has continued to pose a serious challenge to the internal security of Nigeria. When, at the height of the crisis, we were having difficulty obtaining international support, Russia memorably saved the day by supplying military equipment and assisting us with the training of personnel. We are grateful that you did not abandon us in our hour of need. While Boko Haram is largely decimated now, the threat remains, and new terrorism challenges are arising.”

The senate president told the Russian lawmakers that any country that wants to expand its interest in Africa must look to Nigeria.

“Those who are serious about expanding their interests in Africa must necessarily see Nigeria – the powerhouse in the region – as the gateway to the continent,” he said.

“Russia should reckon with Nigeria as the central area of focus in Africa, and take a more serious view of its longstanding ties to our end of the world.”