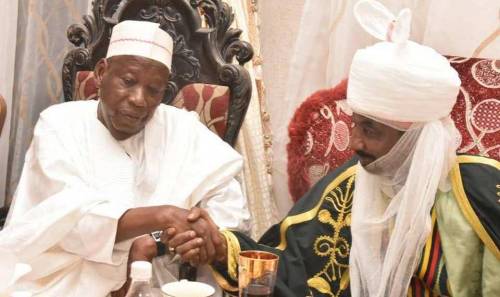 Abdullahi Ganduje, governor of Kano state, has issued a query to Muhammadu Sanusi, emir of Kano, over alleged financial misappropriation.

The office of the secretary to the state government (SSG) issued the letter on behalf of the governor.

The development comes less than two days after Sanusi and Ganduje shook hands and prayed together during the eid-el-fitr celebrations.

The Kano State Public Complaints and Anti-corruption Commission had recommended the suspension of the emir, saying during its investigation, it uncovered that N3.4 billion was misspent by the emirate under Sanusi.

The amount was said to have been misappropriated between 2014 and 2017.

A source said that the letter of query was served on the emir on Wednesday but Munir Sanusi, chief of staff to the emir, said it was received on Thursday.

Munir said the state government asked the emir to respond within 48 hours.

In the report of its investigation, the panel which probed the Kano emirate said over N1.4 billion was spent on “fraudulent and unappropriated expenditure”.

According to the report, the expenditure contravened the provisions of Section 120 of the 1999 constitution (as amended) and section 8 of the Kano state emirate council special fund law, 2004.

“It is also the opinion of this Commission, based on the available evidence, that Emir Muhammadu Sanusi II continued to undermine the investigation through various means which include giving instruction to all officers invited for clarification to shun the commission’s invitation,” the report read.

“The act is seriously affecting the process of our statutory responsibility and offends the provisions of Section 25 of the Commission’s enabling Law 2008 (as amended).”

Another source said the emir could be suspended after responding to the query.

In May, we reported Ganduje’s plot to remove  Sanusi who is believed to have opposed his re-election.

One week after the report, the governor signed into a law splitting Kano emirate into five. The anti-corruption agency also revived the probe of the emirate under Sanusi.