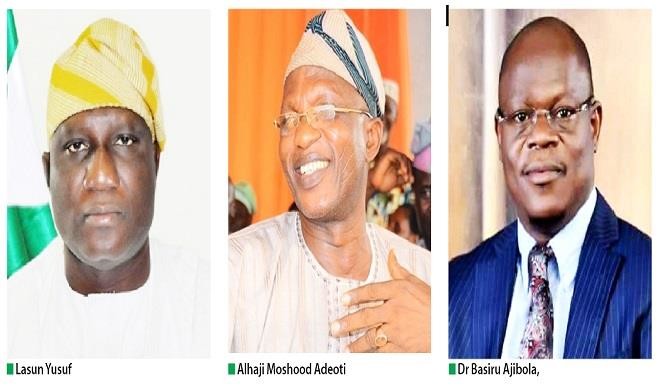 Seven months to the governorship election in Osun State, slated for September, no fewer than 22 people are holding nocturnal meetings, though very few of them are seen as front runners. Even then, the aspirants from both the ruling All Progressives Congress (APC) and the leading opposition, Peoples Democratic Party (PDP), face different impediments inhibiting them from embarking on open campaign.
Lasun Yusuf, Alhaji Moshood Adeoti and Dr Basiru Ajibola,

While the leadership crisis rocking the PDP in Osun State has confused those who may want to come out for the party’s ticket in preparation for the September governorship election, those in the APC who want to succeed Governor Rauf Aregbesola could not publicly declare their ambitions because of what many described as “party protocol and fear of losing their current appointments.”

Through body language and underground mobilisation by their trusted supporters, some of the politicians who are willing to join the governorship race in the state have managed to announce their interest.

However, it is obvious that the contest would be between the APC and the PDP. Both parties seem to be watching and monitoring each other and calculating, apparently waiting for a wrong step from any of the camps to capitalise on.

As the hide-and-seek game continues, Daily Trust on Sunday identifies the politicians that have strategically displayed their willingness to contest in the governorship election.

He is from the APC and a Lagos-based successful lawyer who hails from Osogbo, the state capital. He is one of the major contenders in the governorship race.

Adegoke, who is popularly known as K-RAD, has not hidden his ambition. His posters have flooded all the nooks and crannies of the state. His campaign billboards are all over Osogbo and major towns in the state.

Political observers say the agitation by the people of Osogbo to produce a governor since the creation of the state, and their voting strength, are the major factors that would aid the ambition of K-RAD.

He is the current Attorney-General and Commissioner for Justice in the state. He also hails from Osogbo.

Popularly known as SRJ, Ajibola has not declared his interest publicly, but there are sufficient indications that he might bank on the voting strength of Osogbo and the desire of the people from there to produce the next governor.

Although he would not talk on his governorship ambition at the moment, he had said in one of his previous interviews that he was eminently qualified to be the next governor, saying he had all it takes to rule the state.

To a greater extent, he seems to be in control of the political structure of the APC in Osogbo and its environs. His closeness to Governor Rauf Aregbesola is another strong factor in his favour.

He is the Secretary to the State Government. Popularly called ‘Sheu’, Adeoti is a key factor in Osun politics. He was the chairman of the defunct Action Congress of Nigeria (ACN) which produced Aregbesola for his first term, after which he was appointed as SSG. Adeoti has substantial control of the structure of the party across the state. The Iwo-born politician is a strategist in terms of political manoeuvring.

The hope of people from the Osun West senatorial district to produce Aregbesola’s successor is also a factor that favours Adeoti. He also seems to be the choice of most local politicians in the state. Their insistence to have a home-based politician to lead the state will also favour him.

Adeoti has not announced his ambition, but his supporters have been flaunting it and mobilising for him underground.

Oyetola is the chief of staff to the governor. He is another factor to reckon with in the Osun governorship race.

Majority of the people in the state believe that Oyetola is deliberately positioned to succeed Aregbesola. It is believed that he is a complete gentleman and technocrat who has been assisting Aregbesola to manage the state.

He too has not announced his desire to contest, but many people are pointing at him as the next governor, particularly because of his closeness to the APC national leader, Senator Bola Tinubu.

Yusuf is the Deputy Speaker of the House of Representative and is also in the race. The lawmaker has been moving round the state consulting stakeholders, including traditional rulers to seek support. He was at the palace of the Ooni of Ife, Oba Adeyeye Enitan Ogunwusi and the Oluwo of Iwo, Oba Abdulrasheed Adewale Akanbi, to drum up support for his governorship ambition.

The odds against PDP

The situation at the moment does not suggest that those in the PDP are really ready for the election as they have not embarked on any serious campaign. The division in the party in the state, owing to leadership crisis, might scuttle the chances of any aspirant that would emerge at the end of the day.

A business tycoon and technocrat, Chief Owolabi, who hails from Ile-Ife, is one of the aspirants on the platform of the PDP. He seems determined to run and win the election. In one of his previous interviews, Owolabi, who is the Oluomo of Ile-Ife, said he was certain that he would succeed Aregbesola.

Those very close to him said some powerful individuals in the state were behind him.

Political observers said the Ooni of Ife would want an Ife indigene to be the next governor of the state as they have not produced one since the creation of Osun State 28 years ago.

The former speaker of the Osun State House of Assembly, Adejare Bello, is also willing to contest for the governorship election in the state. Bello, who hails from Ede, was speaker for eight years. He had worked with three governors in the state, including Chief Bisi Akande (between 1999 and 2003, Prince Olagunsoye Oyinlola (between 2003 and 2010). He also worked briefly with Aregbesola when the governor got his mandate through the Appeal Court in November, 2010.

Dr Oduoye is another major contender in the Osun governorship race. He enjoys a massive support of members and stakeholders of the party. He contested for the House of Representatives in the last election and performed excellently though it was won by the APC.

Oduoye is loved by youths in the state. His late father, Senator Simeon Oduoye, was a military administrator of Niger and Ebonyi states. He represented the Osun Central senatorial district between 2007 and 2011.

He is enjoying the goodwill of many people because of the kindness of his late father. Also, the Ikirun-born politician is one of the major financiers of the PDP in Osun. He has also assisted many people in the state. Dr Oduoye said he was determined to serve the people of the state and was sure of the support of the people.

Chief Oke, a Senior Advocate of Nigeria, is also willing to be the next governor of the state. Though he is not a typical politician, Oke wants to try his luck again, having contested before and lost.

Durotoye is a professor of Political Science and presently the provost of the College of Social and Management Sciences, Afe Babalola University. He is one of the aspirants on the platform of the PDP.

Durotoye said he decided to join the race to serve the people with his wealth of experience and deliver real good governance in the state.

With the array of contestants, the APC and PDP would have to be calculative and go for candidates that would be acceptable to the electorate in September. Any of the party that gets it right by presenting an acceptable candidate to the people would inevitably produce the next governor of Osun State.

Many names have not been mentioned, and there could be new entrants into the race as the day of the election comes close.

Ganduje Explains How His Feud With Kwankwaso Started

Why We Are Not Winning the War against Corruption, By Dele Momodu