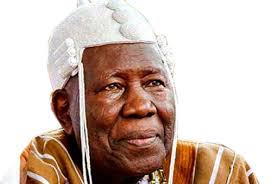 The Olubadan of Ibadanland, Oba Saliu Adetunji, Aje Ogungunniso I, in the early hours of  yesterday lost his most senior wife, Kudirah, aged 71.

Although the cause of her death had not been disclosed as at press time yestreday, she was said to have battled with high blood pressure for sometime.

Director of Media and Public Affairs to Olubadan, Mr. Adeola Oloko, in a statement said: “Olori Kudirat Adetunji, one of the wives of Kabiyesi Olubadan is dead. Aged 71, she passed away in the early hours of today (yesterday).

“Until her death, she was Iyaloja of Bolade Oshodi, Lagos. She would be buried at the Popoyemoja, Ibadan palace at 4.00pm today (yesterday), according to Islamic rites. She is survived by husband, many children and grandchildren.”

According to the Assistant Director, Media and Public Affairs to Olubadan, Mr. Yanju Adegboyega,  the deceased was okay before she went to bed on Wednesday night.  She had since been buried amid tears at the Popoyemoja palace of the monarch.

The Chief Imam of Ibadanland, Sheik Abubakri Agbotomokekere, who led the burial, charged all and sundry to fear God and do good always because death might come at any time.

Those who witnessed the burial included members of market associations, Ibadan Elders’ Forum, Central Council of Ibadan Indigenes and notable leaders of the city.  Oyo State governor, Senator Abiola Ajimobi, who was outside the state,  was represented by his deputy, Otunba Moses Adeyemo and members of the executive council, including Secretary to the State Government, Alhaji Olalekan Alli, and Chief of Staff, Dr. Gbade Ojo.

Meanwhile, the  governor,  has commiserated with Oba Adetunji over the death of Olubadan’s wife.  In a statement by his Special Adviser, Communication and Strategy, Mr. Yomi Layinka, Ajimobi described the demise of Olori Kudirah was unfortunate and disheartening.