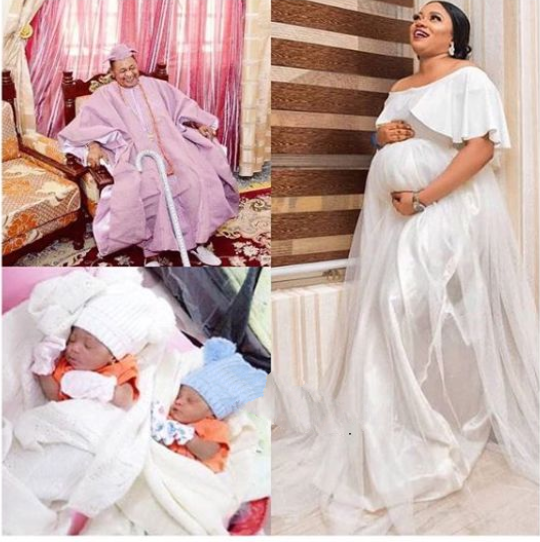 Queen Aanu who gave birth to the third set of twins the Alaafin of Oyo will be welcoming this year, gave birth to a baby boy and girl. Here is a photo of the third set of twins below;
The Alaafin, Lamidi Adeyemi III, and his wives, Memumat Adeyemi and Olaitan Ajoke both welcomed a set of twin each this year. His youngest queen, Memunat, was delivered of a set of twins and an elaborate naming ceremony, was held at the palace in Oyo.
Just as the celebration was on, another young queen, Olaitan, was delivered of another set of twin boys. Her firstborn, a son, was four years old on Valentine’s Day. The Alaafin announced the birth of his twins on Instagram. The new mum also announced the birth of her children on Instagram.
Meanwhile, the two queens who are new mums are best friends and would always be seen together at any social functions with the King. They post their photos on social media and always refer to each other as besties.
Alaafin (literally translated as the Man of the Palace in Yoruba), is the name for the emperor of the Oyo empire. Even though the empire now mostly exists in the history books and in Yoruba people’s hearts, it is an important traditional post. Since 1970, Lamidi Olayiwola Atanda Adeyemi the Third, more commonly known as Oba Adeyemi, has occupied this post. He was born in 1938 on October 15, which makes him 78 years old. He has four wives. He has been together with his first wife, Ayaba Abibat, for more than fifty years. Like Adeyemi, she is also 78 years old. Whereas his most recent wife is also the youngest. She will be 29 in November this year.