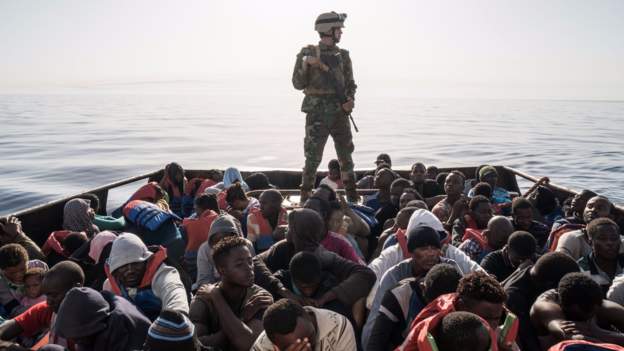 Nigeria’s President Muhammadu Buhari has said all Nigerians stranded in Libya will be brought home and be “rehabilitated”.

Reacting to recent footage showing Africans for sale at a slave auction in Libya, President Buhari said it was appalling that “some Nigerians where being sold like goats for [a] few dollars in Libya’’.

He also seemed to question whether Libyans had learnt anything useful since former leader Muammar Gaddafi was ousted in 2011.

‘‘All they learned was how to shoot and kill. They didn’t learn to be electricians, plumbers or any other trade,’’ he said.

In the video, released by CNN earlier this month, youths from sub-Saharan countries were seen being sold as farm workers to buyers for about $400 (£300) at undisclosed locations in Libya.

Nigeria’s president also vowed to reduce the number of Nigerians making the dangerous journey through the Sahara desert and over the Mediterranean to reach Europe.

This would be done by providing education, healthcare, and food security at home, a statement from the presidency said.

Mr Buhari made the comments at a session with the Nigerian diaspora on the sidelines of the African Union-European Union Summit in the Ivorian city of Abidjan .