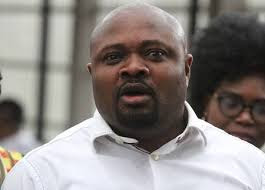 The defendant was arraigned alongside Dudafa Waripamo-Owei, a former Senior Special Adviser on Domestic Matters to former President Goodluck Jonathan, on June 11, 2016, on a 23-count charge of conspiracy to conceal proceeds of crime to the tune of N1.6 billion.

While cross-examining Joseph who gave evidence in his defence, the prosecuting counsel, Rotimi Oyedepo, asked him to confirmed that he deposited various sums of money including N9.5m on January 22, 2014 to his son’s bank account.

In response, Joseph, who disclosed that his son was born on December 28, 2006 and that he opened an account for him soon afterwards, answered in the affirmative.

The defendant also confirmed depositing a sum of N5million in his son’s account on February 3, 2014, among others.
When asked where the money came from, the defendant said it must have been from the account of Ebiwise Resources owned by his family.

He said a sum of N9million, for instance, was transferred from his son’s account to the Ebiwise Resources account, which he and his wife jointly operate.

The defendant further stated that his company once got a contract from the Bayelsa State government to construct a Sport Academy building.

“We submitted an application for the job. There were so many buildings and they allocated one to us.

“Our company was paid N41million for the contract by the Bayelsa State government,” he said.

Asked if he disclosed to his bank that he was also a government contractor, Joseph answered in the negative, adding that “I did not disclose it because it was not necessary. But my colleagues knew about the family business.”

He said he was even encouraged by his bank to open bank accounts for his family members as a young marketer.

Also, when the prosecution counsel pointed out to the defendant that he placed a sum of N200 million in a fixed deposit account on October 21, 2013, the defendant replied that he did not know.

When Oyedepo drew his attention to the fact that his salary was N309,000 per month as at then, the defendant responded that he could not remember exactly how much he earned in a year “due to the fact that the monthly package varied.

“I have been on suspension since EFCC began investigating my account.

“I’m not aware that the bank has dismissed me, but I’ve not been going to work because of investigation into this account.
“Since I arrived EFCC on May 10, 2016, I have not been paid.”

The prosecution counsel also pointed out irregularities on the defendant’s Secondary School certificate, wherein his date of birth reads: June 7, 1974, but the defendant told the court that he was born on March 24, 1972.

In view of this, when asked if he ever tried to correct the date with the West African Senior School Certificate Examination, WAEC, he answered “No, because I felt it was not necessary.

“I presented the certificate to my then employer (Omega Bank) and i did not think it was necessary to change it because it happened years ago”, he said.

Earlier, while being led in evidence by his counsel, Ige Asemudara, Joseph had denied all the allegations brought against him by the EFCC.

He said he was denied food for two days while in the EFCC custody and was kept incommunicado.

He also claimed that the statements he wrote were not voluntary, but were dictated to him.

He said: “All the statements I made were without a lawyer,” he said.

“They are not true. They’re false, with the intention to intimidate and humiliate me. I urge the court to discharge and acquit me.”

The defendants allegesly used different companies to launder the money between June 2013 and June 2015.

Justice Idris adjourned the matter to September 19, 2018 for continuation of trial.

I Hop Around With Your Son In Taxis, Buses…Wizkid’s First Babymama Drops Bombshell