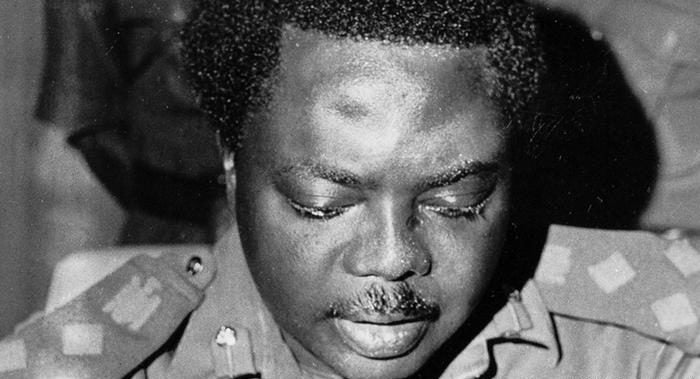 On February 13, 1976, Military Head of State General Murtala Ramat Muhammed was assassinated in Lagos in a bloody coup led by Lt-Col. Bukar Dimka.

We examine the life and times of the leader, and the bright and dark sides of his regime, which lasted for six months.

It was a black Friday in Lagos. A pall of gloom descended on the country as the leader fell by the bullets. The Head of State and Commander-In-Chief of the Armed Forces, General Murtala Ramat Muhammed, was the man of the moment. His revolutionary tendencies endeared him to ordinary Nigerians who were tired of Gen. Yakubu Gowon.

The Kano-born officer was a man in a hurry to clear the mess, which both civilian and military rule had foisted on the nation-state. Suddenly, the beat stopped. On his way to Jumat prayers at the Obalende Mosque, his life was cut short by coup plotters. He was 37. Also killed were his Aide-de-camp, Lt. Akintunde Akinsehinwa, and his driver.

Murtala was not the only target. Also targetted for liquidation were Olusegun Obasanjo, Yakubu Danjuma, Shehu Musa Yar’Adua, Ibrahim Babangida, Olu Bajowa, and Kwara State Governor Ibrahim Taiwo, who was murdered. Major I. B. Rabo was detailed to kill Murtala. Lt. Usman Dauda was to hit Obasanjo with bullets. Lt. Lawrence Garba was to get rid of Danjuma. Col. Bukar Dimka made the coup broadcast. The Chief of Army Staff was attending a conference with top officers and if the coup plotters had insisted on killing him, there would be many casualties. Obasanjo, it was said, was lucky as he could not be located by the murderers. He went into hiding. Another officer, Col. Raymond Dumuje of Army Ordinance Corps, was mistaken for the Owu-born soldier. He was shot and wounded. Babangida later emerged as a hero as he was one of the officers who foiled the coup.

Darkness descended on the nation, following the announcement that a group of soldiers, led by Dimka, the Director of Army Physical Training Corps, accomplished the cruel task. Nigerians who were fascinated by his dynamic foreign policy, war against corruption and proposed transition programme, were enraged. Somehow, students perceived him as a folk hero. As his body was flown home, there were wailings. The country was united in mourning. Later, the 38 masterminds, including Dimka and Gen. Illiya Bisalla, were tried and executed by the military.

Forty-four years after, his magnetism, charisma, and popularity have not dimmed. The Murtala years are still remembered with fondness. However, those who were affected by his pseudo-radical approach remember him as an impatient and temperamental soldier and administrator who spared no thought for details before taking drastic actions. In his book, “Gowon: The Biography of a Soldier-Statesman”, Prof. Isawa Elaigwu, described Murtala as a very intelligent and hardworking officer, but was often repulsive and temperamental, a trait that earned him the name ‘bulldozer’ among some of his colleagues”.

During the civil war, he rejected the risky idea of crossing the Niger River with boats. Gen. Alani Akinrinade recalled that his men perished as enemy forces sunk the boats.

In a bid to clean up society, top civil servants, including notable university teachers and diplomats, who had served the nation without blemish, were swept by the gale of forced retirements that characterised the period. Since his ‘tenure’ was brief, perhaps, other weaknesses of the military general could not unfold.

Murtala took over from General Gowon in 1975. He was a civil war hero with lots of exploits. After the civil war, military officers had frowned at the post-war federal cabinet composition, which excluded them. Restless soldiers also wanted the military governors to yield way so that they could take their place. The grumblings got to the hears of the Head of State, who just made a slight adjustment to the team. He appointed Brigadier Olusegun Obasanjo as Federal Commissioner for Works and Housing. He also gave Murtala, a doyen of military signals, the communication portfolio.

It was an open secret that military boys who were fed up with the Gowon Administration were in favour of regime change. Gowon was also not in the dark, although he made no conscious attempt to avert it. When the top police officer, M. D. Yusufu, alerted him, he brushed the information aside. In Yusufu’s biography, “Aristocratic Rebel”, the author, Ayo Opadokun stated that “Gowon prevaricated and procastinated. The General felt no urgency. The Head of State told M.D that he knew their was discontent, and he was going to handle it in his own way when he returned from OAU”.

The opportunity to hatch the plan came when the Commander-In-Chief jetted out of the country to attend the Organisation of African Unity (OAU) meeting in Kampala. The assignment fell on Gowon’s cousin and Commander of Brigade of Guards, Col. Joe Garba, who led the bloodless coup. At the airport, Gowon, as recalled by Elaigwu, told Garba: “If you are plotting, let it be on your own conscience and let it be without bloodshed”.

Many historians have not given the extent of Murtala, Obasanjo and Danjuma’s involvement in how their boss was shoved aside. However, after the coup, they looked at the these senior officers for direction. Murtala and Danjuma were renowned coup plotters, who participated in the coup that drew the curtains on the lives of Gen.Aguiyi Ironsi and Col. Adekunle Fajuyi in Ibadan, capital of Western State. Murtala, in particular, was popular amount young officers and it was said that he was asked to become the Head of State to give the change of government a sort of credibility.

When Murtala assumed the reins as leader, Obasanjo became his deputy, with the portfolio of Chief of Staff, Supreme Headquarters. In fact, historians have always referred to the administration as Murtala/Obasanjo regime. The trio of Murtala, Obasanjo and Danjuma spearheaded socio-economic and political reforms, which, in part, repositioned Nigeria. However, Danjuma was previously junior in rank to Major-General Illiya Bisalla, who became the Federal Commissioner for Defence. Murtala was immediately promoted to full General, and Obasanjo and Danjuma to Lt-Generals. That created tension in the Supreme Military Council (SMC) and Federal Executive Council (FCE).

Murtala’s maiden speech on July 29, 1975, was explosive. “All members of the Federal Executive Council are hereby dismissed with immediate effect”, he thundered. Subsequently, all executive orders carried the tag of immediacy. No foot-dragging, no lethargy, no tardiness.

But, those negative attributes had become the bane of the civil service under Gowon. Corruption, negligence, nepotism, favouritism and tribalism had soared, thereby making critics to question the basis for sacking civilians from power, in the first instance. Top military brass outside executive power exaggerated the malaise to blackmail the leader. Although Gowon could not be fingered in any corrupt practice, the same could not be said about his military governors and civilian commissioners. Now, under Murtala, decisions were carried out with dispatch, precision and patriotism.

Murtala promptly asked for the list of indolent, lazy and corrupt civil servants across board. He lacked the mechanism for authenticating the claim of the drafters. There was no sober reflection before taking the decisive actions. The fire-brand super permanent secretaries who Gowon relied as kitchen cabinet were victims. Their bright careers were cut short. Out of 12 governors, only two; Brig. Mobolaji Johnson (rtd) (Lagos) and Brig. Oluwole Rotimi (rtd) (Western State), survived the summary dismissal. Many bosses closed their offices in the evening and they could not return to the same office the second day. Many permanent secretaries, directors and other technocrats learnt about their retirement on the radio.

There was instability in the civil service. Everybody had to sit tight. University teachers were not insulated from the military hammer. Public accountability was now by force. But, the effects were far reaching. Suddenly, civil servants started to cut corners in anticipation of such emergencies. Lecturers who had hitherto confined themselves into the campuses started looking outside. Adjustment became hectic for some victims who feel sick and died. But, there was forced sanity.

Murtala also posed as a populist. He promised to hand over to civilians in 1979 and the transition to civil rule programme took off with immediate effect. It was later completed by his successor, Obasanjo.

In post-Murtala period, the nation became the victim of “immediate effect” philosophy. The succeeding civilian authority caught the bug. The Buhari/Idiagbon regime, which was as an offshoot of Murtala/Obasanjo regime, carried on with the affairs of the state with that sense of immediacy.

Reflecting on this trend, and its apparent effects on the operators of the ill-fated Third republic, foremost journalist and commentator, Dayo Alao, once stated that “today’s politicians have no patience for prolonged debate, rewarding consultations and rational thinking before decisions are taken, the result of which are expected with immediate effect”.

Following his demise, relations between Britain and Nigeria strained. The Federal Military Government headed by Obasanjo alleged Gowon’s involvement. The new Head of State refused to visit United Kingdom throughout his reign. Pressures were even mounted on him to pull Nigeria out of the Commonwealth of Nations. Gowon, who had enrolled as a student in Warwick University denied his involvement.

The former Head of State was immortalised. The Lagos international airport was re-named “Murtala Mohammed Airport”. Few other monuments were also named after the gallant officer. For a year or two, February 13 was observed as a public holiday.

But what would have happened, if he was not killed? Probably, he would have also retired into politics or business, or become a non-state actor in the international community. Many believe that, certaincly, his death also shaped the course of Nigerian history.