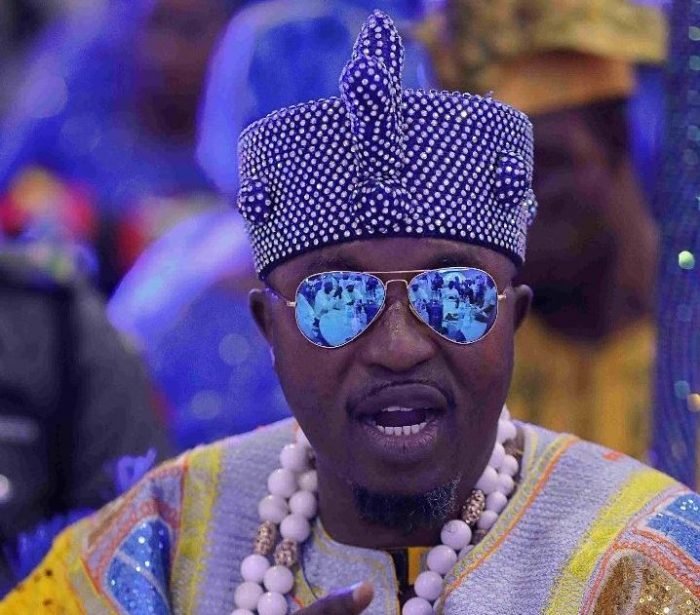 The Oluwo of Iwo land, Oba Abdulrasheed Akanbi recently sprung a surprise, when he reportedly beat up another monarch during a peace meeting.

Sources revealed that what would have also turned to a war was prevented as the two monarchs were said to have almost gone into real physical combat save for the people, who were present at the meeting.

Reports indicated that the Assistant Inspector-General of Police in charge of Zone 11, Bashir Makama, had called for a peace meeting amongst royal fathers from Iwo axis over land disputes.

During the meeting, Oba Akanbi allegedly stood up from where he was sitting and descended on Oba Dhirulahi Akinropo, Agbowu of Ogbaagbaa town, inflicting injury on him.

According to reports, the Oluwo said “there is no issue at all, I wonder why they are so sensational about the issue, we would take care of it, why are they inviting you guys over such an issue, I don’t think it is necessary.”

Olu of Ile-ogbo, Oba Agbaje Habeeb Adetoyese, confirmed the incident to journalists at the Osun State General Hospital, where the assaulted monarch was receiving treatment and accused the Oluwo of threatening other monarchs at the meeting.

“This is indeed a bestial conduct that is highly unbecoming of an ordinary individual, let alone a royal father. How could a monarch of Oluwo status descend so low to the level of physically assaulting another king in the presence of AIG; this is strange to say the least.

”He just stood up from where he was sitting without any provocation and started beating a revered monarch from Ogbaagba, it was the AIG himself that rescued the monarch from him.

“We are calling on Governor Adegboyega Oyetola of Osun State to quickly suspend Oluwo with immediate effect, keeping him on that throne portends great danger to other kings and the state at large,” a source said.

Reliable sources however, disclosed that Oluwo, who initially refused to write statement as demanded of him by the police, later agreed to do so.

Oluwo allegedly boasted to the police that it wasn’t his first time of writing statement at police stations after which nothing will happen. He changed his mind and later wrote to deny whole story.

“The AIG Zone 11, a no nonsense officer was not pleased with the conduct of the Monarch. He deployed full blown investigation into the matter, when he charged a case file to O/C Monitoring Unit alongside the O/C Legal, James Fameyimi (Bar) and his 2i/c, Ayodele Oladiran for their necessary handling of the matter,” a source said.

It was gathered that when Ouwo saw that the police was set to detain him and that the case was getting out of control, he quickly ran to Governor Oyetola, whose intervention wasn’t strong enough to stop the police from doing their job.

We were told that the Governor had to call Vice President Osinbajo to intervene in the matter.

“The VP intervened when he called the IGP. The IGP called the AIG. It was directed that all parties be relocated amidst tight security, specifically to the Iragbiji private home of Governor Oyetola for amicable settlement.

“The Agbowu declined the VP’s directive when he refused to go to Iragbiji. The monarch did not agree to go until the VP had to plead passionately,” said a source, who added that the parties later went into a closed door session.

Oluwo, Oba Adewale Akanbi later issued a statement on why he assaulted the Agbowu of Ogbagbaa

“Oluwo of Iwoland, Oba (Dr.) Abdulrosheed Adewale Akanbi, has make a clean breast of the allegation that he beat Agbowu of Ogbaagbaa, Oba Sikiru .

Oluwo stated he was truly invited by the authority of the police to make peace on his stance curtailing excess land selling by monarchs under his domain, a pronouncement that was not go down well with those affected as they regroup to act against the authority of Oluwo who gave them the crown.

“At the peace meeting held at AIG office, Agbowu of Ogbaagbaa interrupted Oluwo, while making his speech and called Oba Akanbi unprintable names, pointing his staff of office at Oluwo while attempt to stick the staff in his eyes was heavily rejected with force which Agbowu could not withstand.

“How could a constable openly insult commissioner of police and make attempt to beat the CP? Can any monarch try such with Ooni, Alaafin?”

“Attached therein was a letter written and signed by the then Baale of Ogbaagba (the same Sikirulahi Olaleke Akinropo) requesting for a beaded crown from Oluwo and as well narrating how they (Ogbaagba) seek for permission to settle within Iwo domain.

‘Historically and traditionally, Oluwo settled Ogbaagba where they are today as against the lies peddling around. I’ve the papers of how I settled and crowned about 35 monarchs under me. Iwoland goes beyond Ogbaagba and it’s my duty to protect this land not because of me or the present generation, but because of the future generation. This is my sin. They want to sell all the land. Iwo land is almost gone to land speculators and land grabbers just for peanuts.

“Iwo land must be protected. And this is what I’m doing. I know posterity will vindicate me. Everyone can sell his or her personal land. A king can as well sell his. It is barbaric seeing king selling his subjects land for peanut with impunity. I receive complaints daily. Imagine a king selling one land for three to four speculators without the consent of the family who originally owns the land.

“Now, the same Agbowu who pleaded for beaded crown, begging and prostrating went to grant interview that he was never answerable to Iwo. He went far as attempting to turn Oluwo to a blind man by pointing his staff of office to my eyes.

“Monarchs are not estate managements. And to curtail the too bad attitude which they described as their primary source of income, I had to wade in. My intention was a corrective measure and not to take what I had bequeathed to them. He went to the extent of attempting to stick my eyes with his staff of office.

“All affected monarchs in my kingdom should note no one will feed on his subjects land and go away with it. Step is in top gear to revoke all lands illegally acquired by kings and sold to land speculators. Modern system respects protocol and the right of every individual. The towns in Iwoland are choked. Of what moral and traditional justification is land selling to the living standard of a town or city whose kings have sold their future (land).”