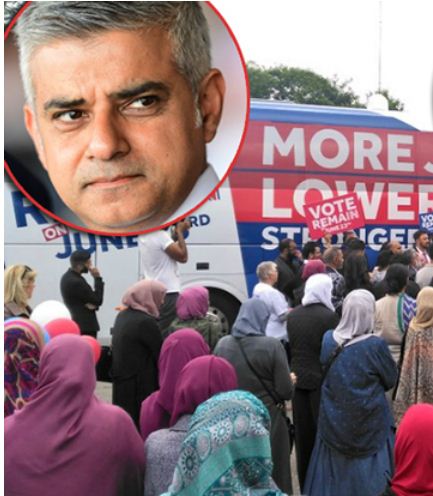 London has elected her muslim Mayor Sadiq Khan, and he didn’t waste any time asserting his cultural ideologies on the citizenry who elected him. His first order of business was to remove all signage from buses that shows women wearing skimpy bikinis or exposing more skin than their wrists or ankles.

According to Mr. Khan, the ban on sexualised advertisements was to prevent exposure to images of scantly clad models making women feel “ashamed” of their own bodies. Though the move plays into the desires of feminists who want to see a more prudish take on women in public life, it also plays to the views of Islamists and Islamic traditionalists who desire women to cover up for reasons of “modesty”.

Then Monday this week, during a speech in Manchester to support the EU ‘Remain’ campaign, Mayor Khan ordered all hijab-wearing women to stand in the back. Not one woman was observed standing in the front with the men.

A photograph from one of Mr. Khan’s speeches in Manchester posted on the Guido Fawkes blog reveals that in at least one of his speeches, meant to galvanise Labour voters in the north of England, women were excluded from the front row and relegated to the periphery of the event. Women were noticeably absent from the front of the crowd.

It is Islamic tradition for all women to cover their bodies in the presence of men. Under Sharia Law women must respect their men and their modesty.