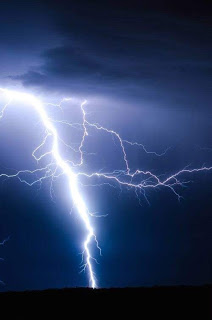 According to  eyewitnesses,  the deceased persons were both having shelter in a Local “Game-Joint” not too far from where both of them reside when they met their untimely Dealth.

Eyewitnesses said, there  were Nine of them under a tree, where young people usually meet to play “snooker Game” during the evening time.

According to an eyewitness,

“when the rain started we were all happy because we have had scarcity of rains this year, but the thunder and lightning that accompanied the rain scared everyone.

“It was not quite long after the rain started that we heard loud screams and wailing which compelled people to scamper for safety.

“In the mist of that confusion, we discovered that the nine  guys have been strucked  down by the lightning, which Seven survived with injuries.

“It was a sorry sight. But we managed to render assistance by taking one of them(Wale) to a nearby hospital for medical attention, which was however too late in coming because he was  already dead.”

It was  further  gathered  that the community believes there’s a spiritual  cause of the tragic event, which they hope to unravel  in seven days time according to the assurance of a Sango-Priest.

The Traditional ruler, The Olu of Ayetoro Gbedde, HRM Sunday Ehindero reportedly confirmed the incident. According to sources,  the king and the council  have reported the incident to the police, and police authority have deployed their men to the area.