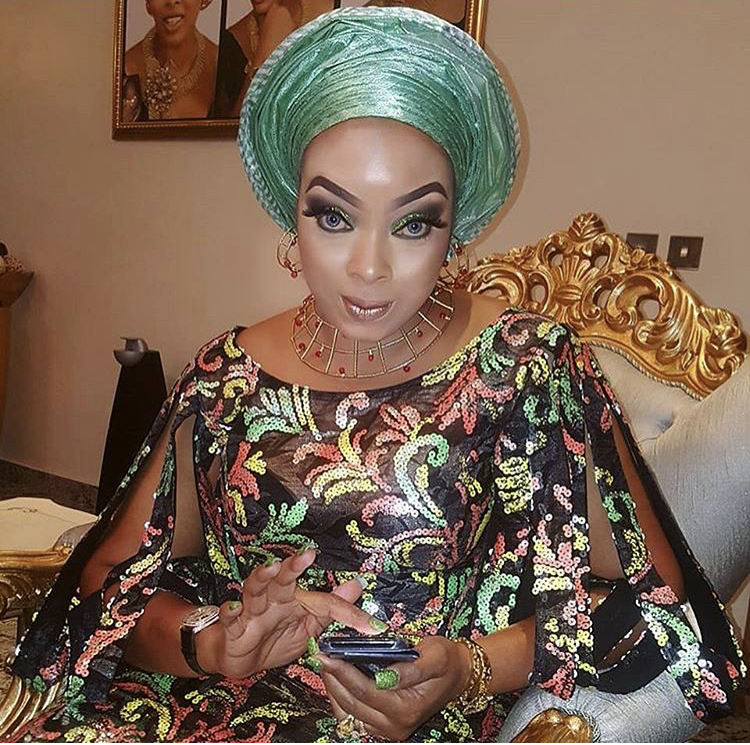 Popular Instagram slay queen and fashion designer, Bunmi Olutunji is in pain. She has been bemoaning the misfortune that befell her since she was hit by the news of the grand wedding ceremony between Oba Saheed Ademola, Kusenla 111, the Onikate of Ikateland and Hadiza Tanko Yakasai, an Abuja-based lady.

It will be recalled that Oba Elegushi got married to Hadiza, the beautiful daughter of Alhaji Tanko Yakasai, veteran politician, human rights activist and former Liaison Officer to President Shehu Shagari. He is also a founding member of Arewa Consultative Forum. The news of the wedding ceremony was also reported to have shaken Oloori Aramide Sekinat, the first wife of the Elegushi.

However, one other lady who was also shaken by the news of the wedding ceremony was Bunmi Olatunji, a former mistress of the Elegushi. She, reportedly, reclined into a state of semi-depression, when she heard the news.

It was exclusively gathered that Bunmi was one of Oba Elegushi’s favourite mistresses. She was so confident that he would make her his second wife, and had boasted to her friends that she was going to have a fairy tale wedding with the handsome Lagos monarch.

Insiders revealed to First Weekly that although, Oba Elegushi had a soft spot for Bunmi, he was uncomfortable about her flamboyant lifestyle and over-inflated ratings on social media. And even when he toyed with  the idea of taking his affair with Bunmi to the next level, the agenda was promptly knocked off by his close allies, who didn’t hesitate in warning that he might be bitting more than he could chew should he go ahead with his decision.

According to  some close friends of Bunmi, she has an insatiable appetite for money and enjoys love making a lot. They also revealed that she always complained of not getting maximum satisfaction in these two aspects from ever busy Elegushi. So, it was just a matter of time before the two realized their affair was leading to no where. Thus, they parted ways last year.

But Bunmi was said to have always nursed a deep-seated assurance that Elegushi would come back to beg her. So she waited and hoped. Unfortunately, her hope was dashed with the Elegushi/Yakasai wedding which took place on May 3. Ever since then, Bunmi has been crying and cursing her close friends who also contributed to the crash of her love affair with the Elegushi.

Meanwhile, the popular fashion designer is reported to be plotting to get back with her former fiancée, Greg Uanseru, the President of GCA Energy Limited. But the billionaire businessman has reportedly  vowed to rebuff such move.

First Weekly gathered that Uanseru is very bitter and angry with Bunmi for dumping him, after she had used him to get all what she needed: a palatial mansion, cars, business links, liposuction surgery and all other body enhancing surgeries.

Sources who were privy to the love affair between the two revealed that Bunmi wasn’t really into Uanseru. Yet, the 60-year old man pleaded with and cajoled Bunmi to become his third wife. But she refused.

Bunmi, who did not hide the fact that she enjoyed great actions in “the other room” allegedly claimed that Unaseru’s tummy was too big and that her friends made jest of her that her sugar-daddy looked like the cartoon character, Barney with the big tummy.

To please her, Uanseru went for gastroplasty operation yet the tummy remained massive like a pregnant woman who is at a full term. Bunmi couldn’t wait to dump him for other action packed guys.

Presently, Uanseru is having a good laugh and he is hailing the public disgrace that greeted a whole Instagram slay queen like Bunmi, being dumped for a northern beauty with solid pedigree.