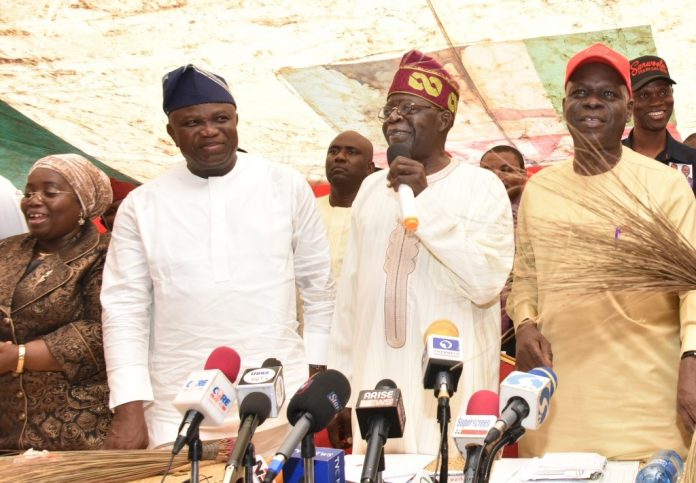 Politics is an arena where mischief and exaggeration may not be the best craft but are permitted excesses of the trade. However, when people engage in wilful defamation, they have crossed the line into the impermissible. There are reports circulating in a Nigerian newspaper and elsewhere on the internet allegedly based on a “leaked” audio tape of Asiwaju Bola Ahmed Tinubu at a crowded public meeting of APC supporters in Lagos on 14 February 2019.

In a desperate attempt to paint Asiwaju in a poor light, the reports grossly mistranslates his statements to imply corruption and election malpractice. This is beyond the pale. Even the description of the audio as “leaked” is desperately illogical. Asiwaju addressed a meeting attended by hundreds of people. The meeting was open to the public at large. Moreover, the media was present and visible. There can be no leak involved when a statement is publicly made and the media present there. This misrepresentation of the audio as a “leak” is again part of a larger attempt to distort a normal speech to rally supporters prior to an election into something nefarious. As bad as this misleading description is, it is the least of the wrongs contained in these counterfeit reports.

The reports claim that Asiwaju boasted that he stole money. The merchants of this outlandishness use the fact of Asiwaju speaking Yoruba at the meeting as the basis for their falsehood. Thus, non-Yoruba speakers are left to accept their translation of Asiwaju’s words. Had Asiwaju spoken in English, they would not have a story to sell for his words clearly do not say what they claim of him. Their allegations are untrue but they figured their lies would still fly because many if not most of their audience cannot understand Yoruba.

If the carriers of this defamation hired someone to translate Asiwaju’s words, they should demand their money back. The only way the translator could have innocently misinterpreted Asiwaju’s words so badly is that the poor translator only started to learn Yoruba half an hour before landing the job to make this translation. Give an accurate rendition of what Asiwaju said to 1000 average Yoruba speakers. Each one of them would refute the mistranslation now floating about.

Asiwaju never said, in Yoruba or any other language for that matter, that he stole money. Numerous media houses sent reporters fluent in Yoruba to this gathering and their reporters. The reports of these more legitimate journalistic sources did not register the same untrue claims as these mercenaries.

Asiwaju said he would not go to Alausa but would use his own funds for the present effort. Thus, for the manufacturers of this fake report to claim Asiwaju said he would take government money is to hear some say “day” and claim he said “night” or have him say ‘up” but claim he said “down.” Such an utter mistranslation is unlikely to be an innocent gaffe. It is more likely wilful slander.

One of the issues Asiwaju dwelt on in his address is the reward system for loyal party members and ardent supporters. He told party members the APC has now devised a plan to compensate them for their hard work after they delivered victory to the party at the polls.

In short, Asiwaju promised the party faithful, APC supporters and members a reward for their efforts to secure victory in the 2019 elections. He has previously stated the goal of getting three million people in Lagos to sufficiently believe in the vision of the APC that they will vote for President Buhari and Vice President Osinbajo. This objective was again the crux of his Valentine’s Day statement.

Take Asiwaju’s statement for what was truly said. He said he would not steal money nor ask for government funds. Instead, he said he would recognise the successful efforts of APC members using only his personal funds. As such, his statement should not be held up to scorn or criticism but should be welcomed as the manner how things should proceed.

The falsifiers seek to paint his statement as improper. However, it is common practice to give tokens of gratitude to party members for their work. It is feeble to suggest that such a practice somehow amounts to vote-buying. No one was directed to give money to potential voters. Asiwaju made it clear that the token rewards would only take place after the election. As far as any reasonable person can discern, it is somewhat impossible to purchase a vote after an election has already taken place.

Asiwaju will not be cowed by these ugly attacks. He is a progressive politician used to the bite and venom of those who would hold Nigeria back. They attack him as they do because they fear his appeal to the people. For his popular goodwill is something they do not have and can never get. He earned it through serving the people. His enemies can only try to buy it for they seek not serve anyone but themselves. Thus, Asiwaju shall continue to fight to keep Nigeria from the clutches those who would run the country not as a nation but as if it were their private country club.

The defamers will lurk in the dark, obscure crevices plotting the next attack. By now, you should know their ambushes are not of the truth but of deception. They aim not to spread democracy but to diminish it. The lies they make are tall tales indeed. But the democratic and positive governance we seek is so much bigger than what they do. In the end, when everything that needs to be said is said and all that needs to be done is done, progress and hope shall defeat deceit and the unjust privilege that is deceit’s master.