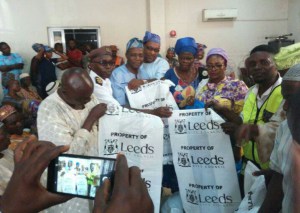 Less than one year into her administration, Chairman of Apapa-Iganmu Local Council Development Area of Lagos State, Funmilayo Mohammed, is currently embroiled in controversy over the N10 million reportedly granted council chairman by the state government.

The trending photo had since the launch created varied reactions from residents of the council area.

Some of those who reacted wondered why she would travel all the way to Leeds county to get waste bags.

A member of the All Progressives Congress (APC) in the LCDA said that he was worried that Mrs Mohammed could take such an idea when importation of nylons are proscribed as contraband in Nigeria.

“Every nook and crannies of Lagos have nylon manufacturing companies. Why did she travel to Leeds to get their property?

Is that what she could do with the N10 million grant she got from the state government to rid her council area of sorts?” The resident, who would not mention his name, asked.

Another resident who posted one of the photographs on social media, simply said: “Wonders shall never end.”

It was learnt that she could be summoned before a committee of the state House of Assembly to explain the circumstances surrounding the procurement of the nylon.

However, when contacted on phone, Mrs Mohammed said there was nothing interesting about the incident as according to her, the launch happened about two weeks ago.

“Oga, go and ask the Ministry of the Environment. It is about Visionscape. You are supposed to ask me since a week ago. The contractor at Visionscape brought the nylon and it was a mistake and the governor is aware of it.