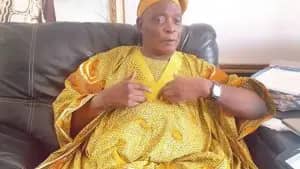 Ex- Governor of Oyo State, and the Otun Olubadan of Ibadanland, Senator Rasidi Adewolu Ladoja has described the sum of N100 million nomination form for the office of the president and N50 million for governorship by the ruling All Progessive Congress ( APC) and the fees charged by the opposition Peoples Democratic Party ( PDP) as brazen display of arrogance and corruption.

The former governor said that the high cost of nomination forms will further promote corruption among elected public office holders in the nation.

Ladoja stated this on Monday, while addressing journalists in his Ibadan residence shortly after he observed the two Rakah obligatory Eld-Fitri prayers, which signified the end of the one month Ramadan fast.

Recall that the APC had pegged its presidential nomination and expression of interest forms at N100 million, while that of the PDP is N40m.

Senator Ladoja, while addressing newsmen, insisted that the high cost of nomination forms would have a negative effect on the nation’s economy.

Ladoja said that aspirants, who spent N100m each to purchase presidential forms and those who spent N50m to purchase the gubernatorial forms, would be forced to embezzle public funds, when they eventually assume offices.

He maintained that the high cost of the forms will further promote corruption among elected public office holders.

“For the office of the President, you spend N100m to seek a job of N56m per annum, the salary of a governor is about seven million naira in a year, which means you are going to earn N28m for four years and you are asked to pay N50m for forms.

“They should understand that they are not the masters, people are the masters, they are just stampeding people thinking that they would vote for them whether they like it or not,” the former governor said, while promising to always protect the interest of Ibadan people as a title chief.