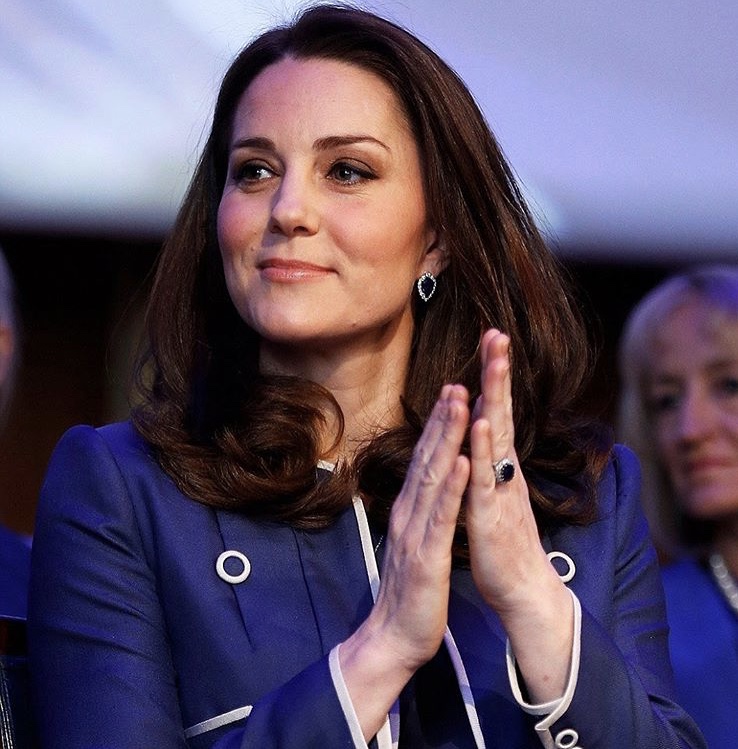 Kate Middleton had a sweet reunion with a midwife who helped welcome Princess Charlotte into the world.

Kate, who is currently in her third trimester, visited the Royal College of Obstetricians and Gynaecologists (RCOG) on Tuesday to learn more about the college’s global health programs aimed to reduce maternal and newborn mortality worldwide.

During the event, the royal mom shared an emotional embrace with Professor Dunkley-Bent, who assisted with the delivery of Princess Charlotte, who was born in May 2015 at St. Mary’s Hospital. And Dunkley-Bent couldn’t hide her excitement as the two greeted each other.

Kate, who is expecting her third child in April, was also announced as the new patron of RCOG. Of Kate’s patronage, Professor Lesley Regan — the president of the RCOG — said in a statement that he was “absolutely thrilled.”

As she left, Kate thanked Regan and said, “It was so great to see Jacqui as well.”

Dunkley-Bent, Head of Maternity, Children & Young People at NHS England, said, “It was a surprise and an absolute pleasure to be reunited with Kate again today. Supporting families at the birth of their baby — including future kings and queens — is hugely rewarding and we’re very grateful to have the Duchess of Cambridge’s support for the nursing profession.”

Last year, Kate opened up about the realities of motherhood in a powerful speech. While Kate said being a parent is “rewarding and wonderful,” she also acknowledged that even she has difficult moments, despite the support she has with Prince George, 4, and Princess Charlotte, 2.

“Nothing can really prepare you for you the sheer overwhelming experience of what it means to become a mother. It is full of complex emotions of joy, exhaustion, love, and worry, all mixed together,” she said. “Your fundamental identity changes overnight. You go from thinking of yourself as primarily an individual, to suddenly being a mother, first and foremost”

Kate said that those challenges have led her to feel, at times, a “lack of confidence” and “feelings of ignorance.” She then went on to discuss the importance of destigmatizing mental health, in particular, when it comes to new parents.

Later in the day, Kate launched the Nursing Now campaign, aimed at raising the profile and status of nursing worldwide, so that nurses can make an even greater contribution at the heart of efforts to tackle rising burdens of disease.

“This campaign means a lot to me personally. My great-grandmother and grandmother were both volunteer nurses,” she said in a speech. “They would have learned first-hand from working with the Voluntary Aid Detachment and the Red Cross about the care and compassion that sometimes only nurses can provide”

We Are Journalists Not Terrorists – Online Publishers Association Tells Police