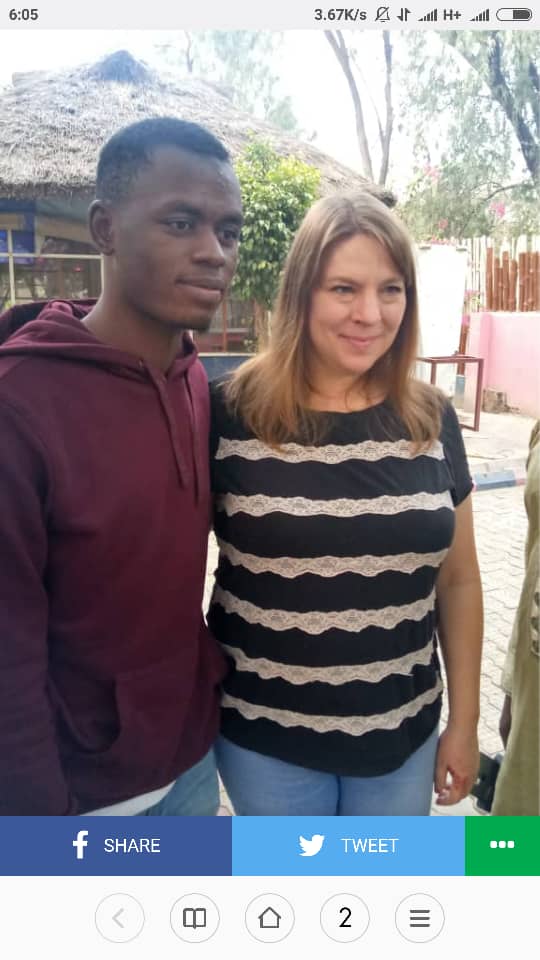 A 46-year-old American woman and mother of two, Jeanine Deslky, is set to tie the nuptial knot with her 23-year-old Kano-born lover, Sulaiman Babayero, whom she met on Instagram.

It was gathered that the lovers had met on Istagram about a year ago, and what started as a normal platonic relationship grew and blossomed into online courtship. The lovers are now set for marriage in a few months following the arrival of the American woman to Nigeria to meet her heartthrob and his family members in Kano.

Delsky, who arrived at the Panshekara residence of her online lover, said she was in Kano not only to see her heartthrob and his parents but also to declare her intention to marry him.

According to her, she decided to trace her heartthrob to Kano because of her “genuine feelings” for him, adding that she had several online dating but found Isa “more real and sincere.”

The mother of two said they had both agreed to get married and fly to the US where they intend to settle, adding that she had seen her dream coming to reality by meeting the love of her life. Sources close to the family of the man hinted that the marriage is expected to be consummated in March this year.

The young Kano lover who has just finished his secondary school, has not only agreed to marry his much older lover and but has also expressed his readiness to follow her to America to settle and start a family. Malama Fatima Sulaiman, the mother of the young man, said she had no objection to her son’s relationship with the woman, adding that she would pray for them to have a happy married life in America.

Meanwhile, the young man’s father said he would report the matter to the State Security Service (SSS) before giving his consent. Mr. Isa, a retired superintendent of police, told an online medium, Kano Focus, at his home in Panshekara yesterday that he had consented to the wedding based on four conditions.

The first condition, he said, is to seek security clearance. “We are trying to do that, we’ll do that, we can’t do without that, we must do that. As a retired security officer, I know what I’m talking about. In fact, I’ll be seeing the SSS by Monday to tell them about the situation.” Kano focus quoted the father. According to the report, the second condition is that his son would be allowed to further his education in the US.

He said the third condition is that Isa would maintain his adherence to the Islamic religion. “I want him to further his education and maintain his religion. No problem, maybe she may become a Muslim too,” he said. The retired police officer added that his final condition is that the bride-to-be must produce a written document of consent from her parents or relations as Muslims are not allowed to marry a woman on her own.

The woman, whose real name is Janine Sanchez, is reported to be set to depart Nigeria in a week’s time and return in March for the wedding.

Mother of 11-day-old baby killed, burnt to ashes on way to church