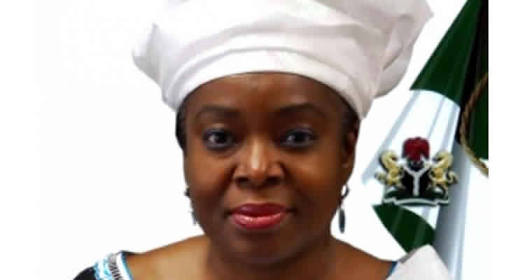 Why She Is Still In EFCC Net
Ex minister of the Federal Capital Territory, and daughter of second republic minister of justice and attorney general, Chief Richard Akinjide, Oloye Jumoke Akinjide this week returned a whopping sum of 650m believed to have been looted during her period as a minister under ex president Goodluck Jonathan.

First Weekly can exclusively revealed that Jumoke, who is still being held by the Economic and Financial Crimes Commission (EFCC) relying on a court order capitulated from her previous brazen denials of any loot and reportedly pleaded with the agency for a soft landing.

A source disclosed to us that a distraught Jumoke Akinjide paid the whooping sum from the account of her daughter in one fell swoop, when she realized that there was no any hiding place for her any longer.

“It is really strange, we thought she would enter into this kind of gradual payment arrangement like some of her colleagues, but she surprised us all by paying the money at once,” said an EFCC source.

Our investigation revealed that this payment might bring a sharp turn around to her trial and continued incarceration.

“You know the husband, Alhaji Ahman Pategi is a powerful member of the House of Representatives and also a close ally of the Senate President, Dr. Bukola Saraki. We even learned that Saraki plans to make him succeed Governor Abdulfatah Ahmed of Kwara State in 2019,” a source revealed.

It would be recalled that Jumoke’s husband was initially detained when she ran away in the course of her investigation claiming to be sick.

She later reappeared, when she discovered that the EFCC Chairman, Ibrahim Magu was not someone to play such game with.

The husband only regained his freedom when she showed up.

We gathered that this payment notwithstanding, the EFCC is still determined to make her face the court for trial.